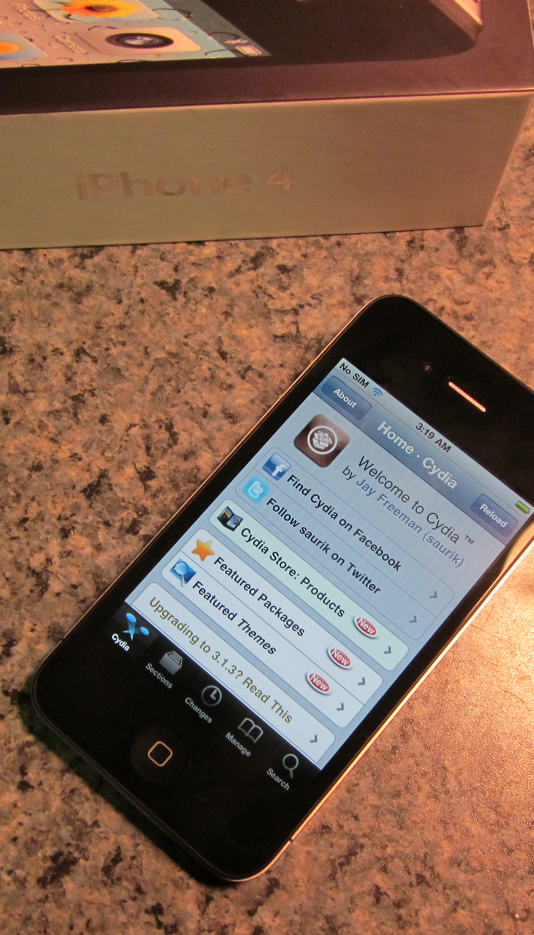 Geohot, the little genius behind blackra1n and blacksn0w is back at it again. In a blog post he wrote today, Geohot showed us a picture of a jailbroken iPhone 4 running Cydia.

Geohot says that he won’t however release the jailbreak to the public and made it clear that the limera1n jailbreak we talked about before was nothing more than a website with no specific goal.

Got one of these in the mail today and figured I’d give it a shot.

As far as a release goes, it probably won’t happen from me. limera1n is little more than a raindrop on a website; it was never mentioned by me previous to this post. pwned4life is a complete invention of some blogger in a basement somewhere. When I said pwned for life, I was referring to the original iPhone, 3G, and Touch; which of course are, by the aptly named PwnageTool.

Again, please don’t ask for release dates. Every person that does makes me want to release a little bit less.

Did you read this last sentence well? I understand Geohot doesn’t want to harassed with questions about a possible release date, which lets us hope he might be willing to release an iPhone 4 jailbreak one day or the other.

If I had a guess, I’d say that Geohot is working on this jailbreak right at this moment and that he will do everything he can to release a jailbreak for the iPhone 4 before the Dev Team or Comex do..