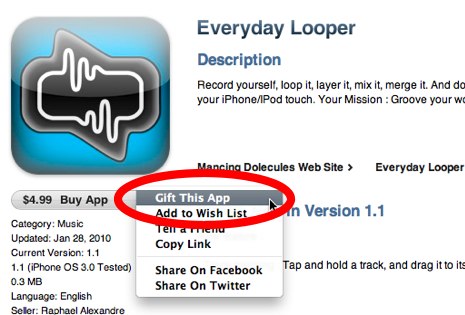 Giving an iTunes gift card is cool, but I think it’s even cooler to be able to give specific apps as gift, and that’s what Apple just made possible.

According to Mashable, this new feature has come to the App Store, allowing you to gift specific iPhone apps to other users.

On the drop-down box on each application’s page (next to the “Buy” button) there’s now an option that says “Gift This App.” From that point, you then just enter in details like name, e-mail address and the message that you want to include.

Apparently this feature has been around forever and allowed you to gift music from iTunes. I wasn’t aware of it until today. A pretty simple bu neat feature… What do you think? [Via Download Squad]