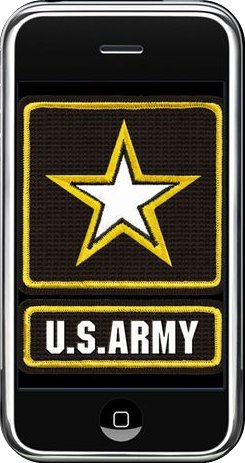 War? You bet. There’s an app for that and Ground Zero is Cupertino, CA. The US Army’s IT department paid a little visit to Apple recently to consult using Apple products on the battlefield. While there are some huge advantages, one can probably guess there are just as many disadvantages.

Imagine the situation of a battalion of kids with their sergeants and commanders carrying iPhones. There’s some downtime and some soldiers are ordered to stand guard at certain posts. Hours and hours drag by with no action, boring some soldiers. One soldier walks over to an empty chair, drags it back to his post, sits down and starts playing games. Or perhaps he launches his favorite Twitter app. Or maybe Facebook. As the illumination of the iPhone grabs his undivided attention, an enemy combatant sneaks past him.

OK, OK. So the odds of that scenario are slim, but this is an interesting venture for Apple nonetheless. Apple is known for developing revolutionary devices so it’s impossible to tell whether the Army will use existing devices or have Apple build a custom device from scratch.

“The Army is moving away from big-green-box solutions and toward those that will adapt along with our Warfighters on the battlefield,” says Major Gen. Nick Justice.

Given that the iPhone is chipped for cellular communication, comes packed with GPS, is razor thin and ultra light, it makes for an enticing and ideal device for soldiers already adapted to the device. Even if the soldier has never held an iPhone, they can adapt to the device within a day.

While adapting the soldiers may be easy, there is still some cause for concern. Does the US Army expect our soldiers to place their trust in a device that can’t have the battery removed and replaced? If our soldiers are going to be putting their trust into a communications device such as the iPh0ne, the battery issue must be addressed or else we risk having soldier getting stuck in situations without means of communication.

What are your thoughts concerning Apple mingling with the US Army? Please share your opinions.