Back in December I tweeted about a new app called TUN3R, a sort of visual dial for Internet Radio. The app is interesting if you like Internet radio, but doesn’t really go beyond that. The same folks have just released another application called Milk Crater which they claim to be the world’s first real-time audio iPod browser. Okay, but how does it actually work?

Milk Crater generates a large grid created from your iPod collection. It uses cover art to generate the tiles, or if no cover art is available for a song, then it uses the song title. 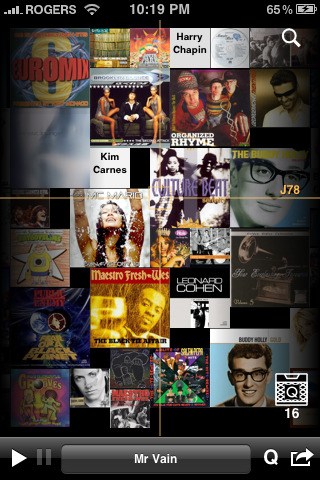 The first time you run the app, it starts a “Dial Rebuild” process which can take anywhere from 10 seconds to a couple of minutes. It does this in order to generate a giant “dial” (which is more like a grid of cover art and song titles). This is where the fun begins. After generating this “dial”, you can move around it by sliding your fingers.

What really sets Milk Crater apart from other music apps (including the iPod app itself) is the fact that it switches audio in real-time as you slip and slide around the grid with your fingers.

Once you get the hang of it, you can start doing more interesting things like building playlists on-the-fly as you browse. It’s also possible to export these playlists back into your iPod, through an e-mail export (the only way possible).

Another worthwhile feature is its search capability, which begins highlighting results on the “dial” as you type.

At this point, it’s tough to say if it will replace the iPod app itself, but it may give it a run for its $1.99.