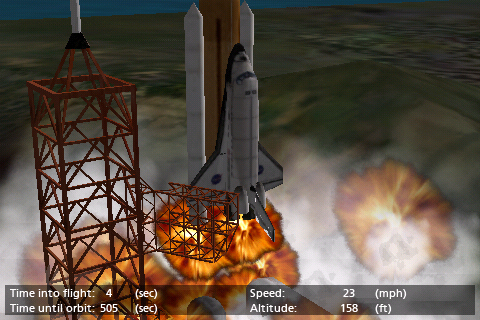 Laminar Research (developers of the popular X-Plane series for iPhone) has released another realistic iPhone app: Space Shuttle.  Space Shuttle is all about… you guessed it, the space shuttle.

OK so a little bit of more details. When you open up the app, a live, automatic launch is going on. It’s not a video. Though it would be cool to launch yourself, it’s pretty cool to watch this launch and let go of the tanks. It takes about 8 minutes if you want to watch the whole launch process. It’s fun to watch, and you have control of the camara. So you can pinch in and out, zoom in and out. Turn it around as you want, pretty cool. 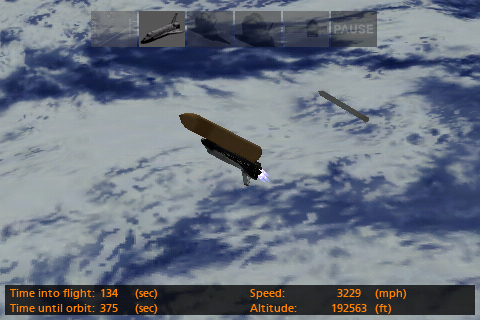 The launch might be fun to watch and all but let’s move on to the rest of the app.

The first “mission” you have to choose from is to dock with the ISS. That is really dam cool. On the page of the mission (as well as for every other mission) are instructions of what you have to do. In this case, you have to use the translation-rockets at the right to move the green disc into the green circle. While doing this you must use the throttle on the left to move towards the stations. Try to maintain your device still! Your accelerometer controls the shuttle. It’s pretty challenging! I’ve been trying and have come real close, but sneeze or something right at the end and I mess up. I know, totally lame. 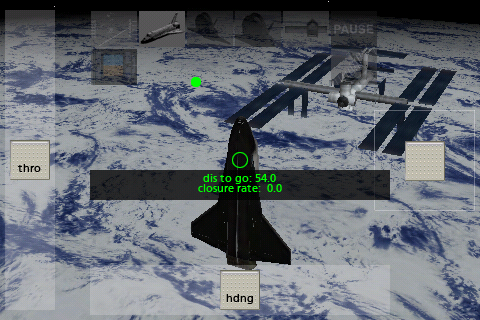 Next up on the mission list is Final Re-entry, the hardest mission of all in this app, and possibly in all iPhone apps. You start off 591 miles downrange at 197,000 feet. It is a total re-entry into earth. This is the final 12-minute glide to Edwards and is a good challenge. A cool effect added in the first update is that if you change views to external view during this mission, you will see the Orbiter cooking in it’s own plasma. Pretty cool. 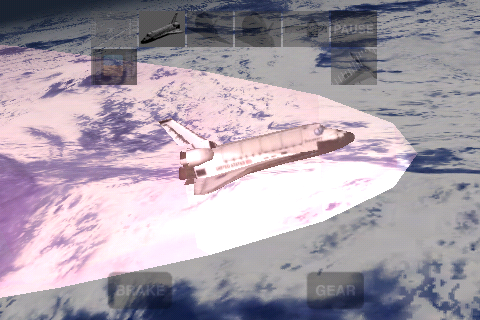 Next up is Full Approach. This is the 2nd hardest mission, not as hard as final re-entry. But it’s a little tricky. You must fly over and past Edwards at 60,000 feet, then do a left 230-degree turn to bring it back to Edwards for a landing. It’s pretty tricky maintaining speed and altitude. But not as hard as the other mission I mentioned. A real neat challenge. And yes, I managed to (somehow) land it!

And if Final Re-entry or Full Approach is too hard for you, the last mission is the one for you. Final Approach. Edwards is right in front of you. Just slow down yet maintain your speed and land it. It’s pretty simple and I recommend people to start off here. 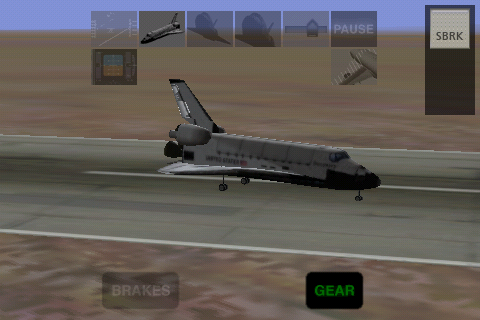 So in total you might ask, is it worth it?  Space Shuttle is priced at $1.99 . It offers realism like no other on iPhone. And as far as I know, it is currently the only space shuttle simulator out there.  I’d say it’s well worth it. So go pick-up your copy of Space Shuttle. It’s awesome.

A few notes to users, they are important. Make sure to check out the settings page inside the app. It is where you choose the missions. Make sure to go into “set” and set the current tilt your iPhone is having. This is almost mandatory if you want to use the app, cause if not you won’t be able to control it.  And also, turn up the volume while you are on that page.

More instructions on the missions (if needed) can be found here.