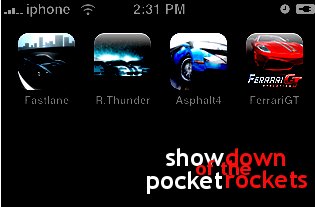 Now, I keep trying to put this review off until after Need For Speed is released, but as much as this game keeps getting pushed back, it seems I’ve got a better chance of seeing a black man become president than I do of getting to speed past NFS cops on my iPhone anytime soon.  And now that I’ve made that comment, I want you set your facial expressions to ‘awesome’, and get ready for this super fast, super awesome, super ultimate, iPhone 3D racing review. Join me, long time iPhone modder/blogger, as I weave in and out of traffic and human skulls on my quest to find the ultimate 3D racer. After all, everyone has to have at least one good racer on their iPhone, right?

Now I must make a few things clear before we get started. I decided on the four games chosen for this review based on popularity at the App Store, realistic 3D style and graphics, multiple racing modes, and then probably just personal preference. I am aware that there are more racing games for the iPhone, and feel free to chime in on the comments section about your personal favorites, but for all intents and purposes of this article, these are the games I chose.

We have a quick game on our hands. So quick that you can launch the game and be racing within 9 seconds (I timed it!) It seems like Polarbit had the best intentions of this game, but a lot of aspects seemed to fall short. Let me tell you the things I like about it before I tell you the things I don’t.

I like that it has a multiplayer mode, but it seems like I’m never close enough to someone else with an iPhone and this game, wanting to play multiplayer, to try it out. I also like that it lets you save player profiles. The quickness is also very important to me. I can’t stand when, say, your waiting at the dentist office to be called. You wanna kill some time with a little iPhone gaming. You launch a game, and after 3 splash screens, a demo video, and a handful of settings, you might get to race around the first corner before you hear your name called out. This is definately not the case here, as the quick play mode picks your car and track, and starts almost instantly.

Now for the things I didn’t quite enjoy. The auto accelerator (so you don’t have to do anything to make the car go) is a neat idea, and really gives the game an arcade feel, and adds to the overall “pick-up-and-play-ability” of this game, but I’m just not a fan. I like that its an option, as I’m definitely more of a speed up, slow down type of person, especially around corners. And finally, the steering seemed a bit too sensitive, which made for a very jerky driving experience when mixed in with the auto accelerator. It seemed as though a small tilt in either direction resulted in immediate detours off the track. The graphics, I can’t say yay or nay about. Of course they’re stunning for a cell phone game, but didn’t seem as sharp as the other racers in the review. Raging Thunder [iTunes Link] is overall a descent game, and could be a great game with some fine tuning. If you can get a handle on the racing controls, it is definitely worth your $2.99.

The first thing you’ll notice is that it loads in seconds. No cool 3D rendered videos, no clicking through several developer splash screens, just straight to the game and the main menu. The user interface in FastLane [iTunes Link] is extremely simple and easy to use.

Menu hopping has never been such a breeze as you switch from either easy or hard, pick what type of race you’d like to run, and then pick your car. You can choose from arcade, challenge, and time trial races. The absence of multiplayer and career modes are noticeable, but not devestating, as you’ll be plenty busy racing and completing challenges, trying to unlock more beautiful tracks and cars. Which brings us to the next element of the game, the graphics. Everything from the landscapes, to the shine of the cars you catch during replays, look great, and will easily impress your friends who are now embarrased of their 2D versions of Bejewled on their Blackberrys.

Finally, and most importantly, the gameplay. You can make a game look good, but if playing it makes you want to throw your iPhone in the Potomac, theres probably something wrong. Controls in FastLane, are handled by a gas pedal by your right thumb, and a brake by your left (landscape style), and of course the accelerometer deals with the twist in turns. This method actually works very well, as the pedals are large enough where I never miss them, and the accelerometer is sensitive enough where small tilts in either direction are enough to turn your vehicle. With no big name licenses for the cars and the absence of a full career mode, don’t expect this to rival Forza. But for those of you looking for an easy to use 3D racer that you can pick up and play anywhere, this might just be your cup of tea.

You’ll notice a gorgeous 3D rendered video again at startup. You’ll see similar load times and then a very similar main menu. You still have career, mulitplayer, and quick race options. You also have an ‘options’ option which contains way more options than it’s twin brother Asphalt. Auto accelerator can be turned off and steering sensitivity can be adjusted which makes for a much more realistic and pleasant driving experience. You are limited to Ferrari brand only cars, but there is a whopping 32 of them and they are all gorgeous. I haven’t yet seen the ability to upgrade car parts, or customize any further than the color, but I may be missing something.

For me, it’s mostly about the game play anyway, that kinda stuff gets tedious after a while. Game play is great! With the welcome edition of sensitivity control and auto accelerator off, the steering wheel by the left thumb and gas and brake by the right thumb work surprisingly well. Mix that in with a color coded path your car should follow that is green when your on track and turns red when you’ve veered to far away from it make for a very realistic racing experience. The graphics are just as gorgeous as our #1 pick and at times might look even better. The menu system seems to have been tightened up since Asphalt, as things do seem quicker and smoother, but it may be because there are not as many features in this game.

With longer load times, and tons of options to tweak, if you are looking for a quick pick up game, this may not be the one for you. But if you are going for ultimate mobile racing experience, this one, also, will not dissapoint. At $5.99, you may have a hard time deciding which Gameloft game to go with, and even though Asphalt is taking home the trophy, I might recommend you try this one if your torn, it just seems a little more refined.

If girls were impressed by how sweet games looked on your iPhone, you’d probably want to show them Asphalt 4: Elite Racing [iTunes Link]. This thing screams adrenaline, as launching the application opens a gorgeously rendered 3D video of a Buggatti Veyron, a Ferrari Enzo, and several other cars racing through New York, and you realize this ain’t no ordinary racing game (bad grammar intended for effect).

After a bit of loading time (that’s right, loading time), a menu fit for a console game opens up. You can scroll through an insane amount of high end, brand name cars (licensed!) including Ferrari, Buggatti, Nissan, BMW, etc, even motorcycles! Next, check out which city you want to race in, New York, Paris, L.A., the world is your playground. Tweak your car if you’ve earned some money racing, by switching up wheels, changing paint jobs, upgrading engine parts, almost everything on the car is customizable. Play in or host a mulitplayer game, or start a career on the racing circuit, and see if you can earn enough money to buy an Aston Martin or a Ferrari Enzo.

Sounds like a lot to take in, hopefully its got a good, easy to use interface. Well, the menus are great looking but at times feel sluggish and disorganized, definately needs a good lesson from the FastLane folks. The in-game graphics look great, and animations are nice and smooth (loading times weren’t for nothin’). You have 3 choices when it comes to gameplay. You can use the accelerometer to tilt left and right, you can use a small steering wheel, operated by your thumb, or you can touch left or right of the car when you want it to turn. The accelerometer choice would be nice, but I found myself tilting it so far over it’d go into portrait mode out of landscape mode, and that was rather frustrating. I’ll be honest, I didn’t give the touch steering method much of a chance, it just felt wrong. The steering wheel was cool, but was very sensitive, and I could not find an option to tweak that.

Overall, I wasn’t fond of their controls, but like all racing games, it takes a while to get used to, and before long I was constantly coming in top 3. This game is definitely the mammoth of the 4 and almost the winner by default. It just offers too much content, even at $5.99, it’s a steal. If you are looking for the ultimate racer, I’d have to say this will not disappoint.

That’s my story and I’m sticking to it. Hope I didn’t blow your minds too much with that crazy review. Let me know about your ifs, ands, and buts in the comments.