I thought it was funny that Warner Bros. came out with an iPhone app that could draw the Joker’s signature logo from “The Dark Knight” over people’s faces.  “The Dark Knight: HaHaHa” [iTunes Link] was a small way to keep a mega-popular film in the back of people’s minds.  Little did we know that other studios would be seriously considering iPhone applications as a way to market films. 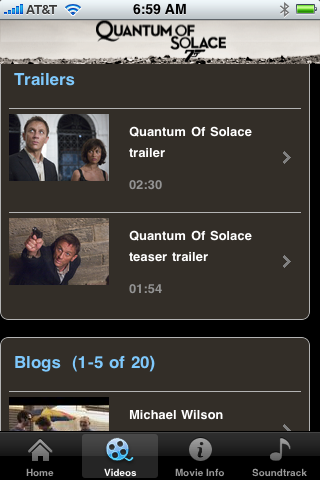 Next, came the Columbia Pictures app “James Bond – 007.” [iTunes Link] It features everything you’d want to know about the film “Quantum Of Solace,” not unlike the content you’d find on the official movie site.  I think it’s brilliant.  Only the ultimate Bond fans would sit at home at their desktops watching production videos.  But when you’re on the go and need to kill time, this app would come in handy.

Warner Bros. struck back with an app directed at fans of another recent movie “Sex And The City.”  Although “Sex And The City: Carrie’s Closet” [iTunes Link] is a bit late to promote for the big screen showings, there is no doubt the studio is trying to up its DVD sales.

The most curious movie-tie in, however, is the “School Of Rock” [iTunes Link] app.  Why would Paramount Pictures go through the trouble of making a $6.99 app based on a movie that is five years old and been out on DVD for years?  Well, there have been rumblings that a “School Of Rock” sequel is in the works.  But, an article from aceshowbiz.com last month says that the director of the film is not sure he will do it.  My guess is the studio made the app to see how much interest there really is in a “School Of Rock” sequel.  I am downloading the 114 MB app as I write this blog, and I will post my findings in a future article.

And, at least one television show is getting into iPhone marketing.  “South Park” will have an app on the App Store that will stream clips on your iPhone among other features.  Boingboing.net has some screenshots of the upcoming app.