In a series of Tweets shared Monday afternoon, @pod2g who is now with Vigilant Labs echoed the idea of Todesco’s presentation: that hacking iPhones has gotten tougher and that Apple’s security team is taking this stuff more seriously than ever before.

Quick summary of my perception of the iOS world after Hexacon. Apple’s SEAR team has done a tremendous work over the last couple of years, to the point that many of my iOS fellow senior researchers have moved to Android (for this reason).

This is unprecedented and tells how much iOS security has improved. For those unaware of the situation, please take a look at @qwertyoruiop‘s presentation. It is very informative on the pain inflicted to the offense side of InfoSec. In French we say, “Cela sent le vécu.”

I can confirm that the people I have been working with have been suffering from the difficulty as well. The situation doesn’t mean iOS is unbreakable, though, and for me, it makes the challenge even more interesting for the ones that are keeping their positions.

In his statement, @pod2g mentions how many of his fellow security researchers have taken the path of least resistance to try attacking the Android platform instead.

Why? Because it’s easier; iOS security has been hardened all around, making it more burdensome to attempt. Even seasoned jailbreak creator CoolStar of the Odyssey Team says that making jailbreaks today has gotten too stressful for her.

On a more positive note, however, @pod2g conceded that despite the unprecedented improvements to iOS’ security, the mobile operating system is far from unbreakable. It merely makes the effort to hack it more challenging.

But it’s this very challenge that appeared to fuel motivation from other seasoned hackers. A name that might sound familiar if you’ve been jailbreaking as long as I have also joined the conversation: @p0sixninja, A.K.A. Joshua Hill: 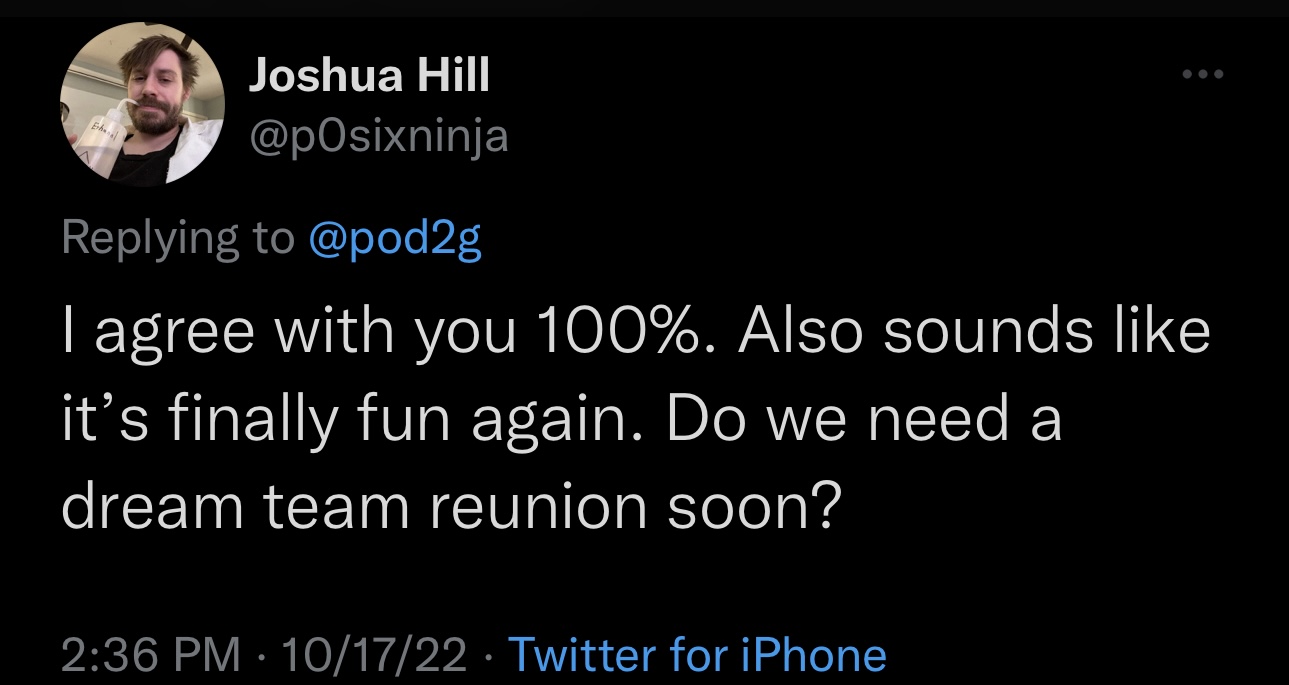 In his comment, Hill even suggested the idea of a Dream Team reunion after saying that the challenge sounded “fun again.” Such a talented hacking team would absolutely leave Apple with something to quake in its boots about.

The jailbreak community still doesn’t have access to a public iOS 15 jailbreak despite the fact that iOS 16 just launched last month (unless you count palera1n, which is really only intended for developers and only supports older devices susceptible to the checkm8 bootrom exploit).

Currently, a number of teams are working on iOS 15 jailbreaks, however a release timeframe remains unclear as iOS 15 jailbreaks are rootless and the dependencies used for tweak development and tweak injection need to be updated to support this new dynamic before a jailbreak can be ready for the general public.

In another glimmer of hope, Todesco showcased a jailbreak on an iOS 16 device at his Hexacon presentation, however this was likely a private effort intended as a proof of concept that won’t be released publicly.

It’s always great to hear from veteran iPhone hackers, we only wish it could have been under happier circumstances. In any case, the wait for a jailbreak continues…