Apple finally gave us a reinstated battery percentage for notched iPhones running iOS 16 after initially mixing it when the iPhone X launched, but at least one jailbreak tweak developer appears to have a completely different battery level indicator in mind. 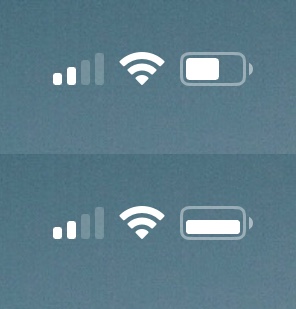 As you can see for yourself in the before (top) and after (bottom) screenshot examples above, VerticalBatteryDrain makes the battery fill drain in a vertical top-to-bottom motion rather than a horizontal right-to-left motion.

The effect, as you might come to expect, is purely aesthetic and doesn’t affect the battery level indicator’s primary function in any way, but it’s one of those general jailbreak tweaks that’s captivating enough to get someone who has never jailbroken an iPhone before to ask how you did that.

Obviously, you’ll want to respond with something like, “Oh, this? It’s just a jailbreak tweak. You could do this too if you use [insert jailbreak tool name here].” Conversations like these help the jailbreak community grow by finding common interests and spreading the word about what you can do with a pwned device.

If you’re interested in giving the new VerticalBatteryDrain jailbreak tweak a try, then you can download it for free from Andrew Grant’s personal repository via your favorite package manager app. The tweak supports jailbroken iOS 14 devices and is open source on the developer’s GitHub page.

If you’re not already using Andrew Grant’s personal repository, and we suspect you aren’t because it’s rather new, then you can add it to your package manager app of choice by adding the following URL:

What are your thoughts on a vertical battery drain versus a traditional horizontal battery drain? Be sure to let us know in the comments section down below.