A Virtual Private Network (VPN) adds a middleman between you and the end server in an internet connection, acting as a relay that helps enhance your privacy. It does this by cloaking your real location, and in many cases, encrypting your internet traffic to prevent snoopers from seeing what you’re doing as you browse the web. 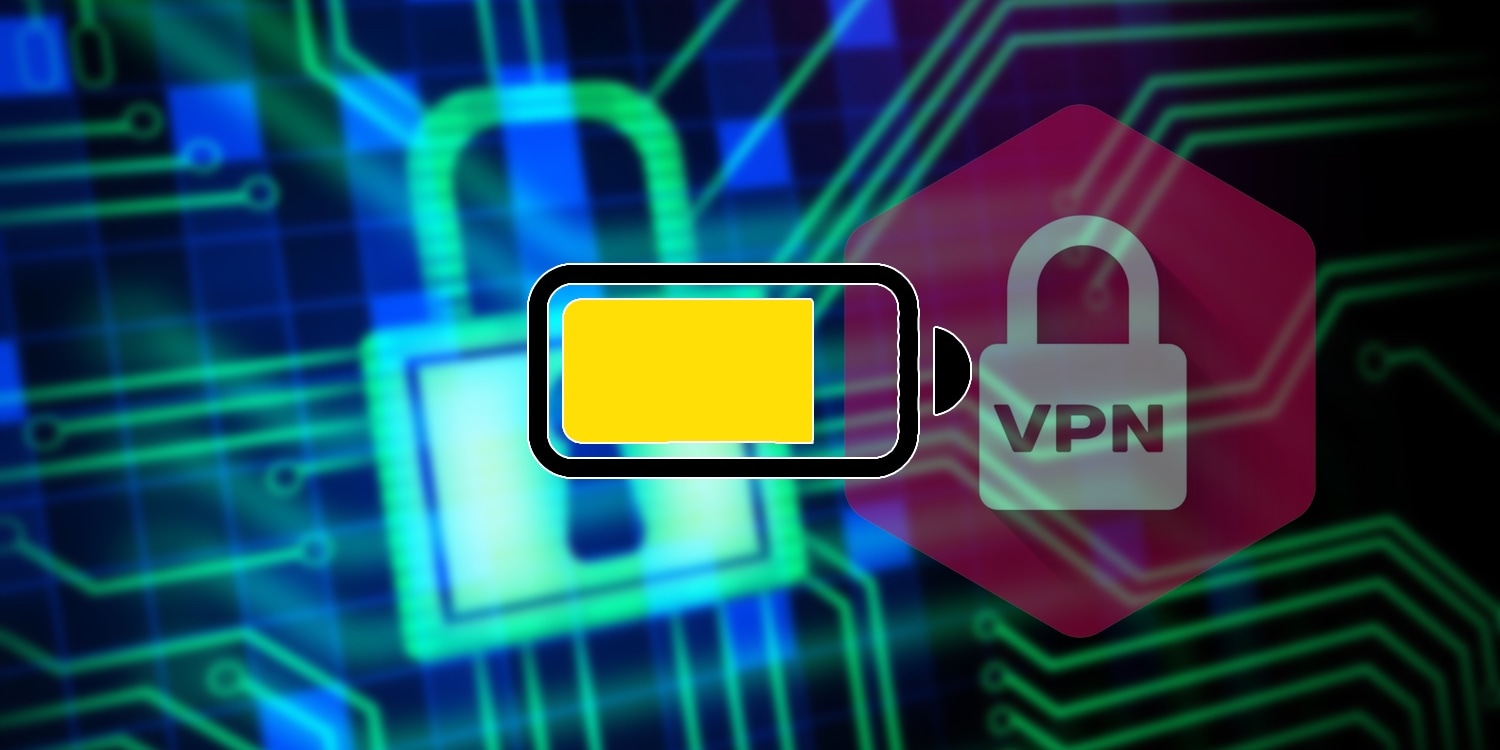 VPNs are infinitely useful for a wide variety of circumstances, however if you use one on your mobile device while connecting to the internet all the time, then you may find that your battery doesn’t last quite as long as it would if you had used the internet with the VPN switched off.

If you’ve ever wondered why, then you’ve come to the right place…

While good VPNs do enhance your privacy as you browse the web, they tend to tax mobile devices’ battery life, at least, they do when they’re being used in some of the most common ways.

Estimates of the actual impact of VPNs vary, but there’s a consensus that the impact adds around 10-15% of additional battery drain to what would otherwise be considered your typical battery drain, on average.

Several variables are responsible for the level of strain on your device’s battery life while using a VPN. Among some of the most significant are:

With so many factors to take into consideration, we’d understand if it seems confusing at first glance. Fortunately, we’re here to break everything down for you, which is what we’ll be doing for you down below:

Starting with encryption – one of the primary selling points of a VPN – it’s important to remember that encrypting stuff increases the size of information being leaving and entering your device. Right off the bat, this means your device’s wireless radios are working harder to move larger chunks of information between the device and your access point – whether it’s Wi-Fi or cellular.

But perhaps even more important is the fact that your device’s onboard CPU is responsible for decrypting encrypted information so that you can make reasonable sense of it. If your CPU didn’t decrypt that information, then you wouldn’t be able to read the text on a website or make sense of the images. In its encrypted form, this data would instead appear as gibberish, and this is intentional. It’s what keeps snoopers from being able to see what you’re doing.

So not only is your wireless radio working overtime to move larger chunks of information when your VPN is turned on, but your CPU is running more processes to keep up with your workflow, and both require energy, which comes directly from the little fuel cell packed tightly inside of your device – the coveted battery.

Another factor is your handset’s signal strength, and this will be the case whether you use Wi-Fi or cellular. Each of these require energy to use, and as we discussed earlier, sending larger chunks of data over a wireless connection means more sustained power usage.

This happens even when you don’t turn your VPN on, but when you do, you increase the amount of sustained usage your hardware contends with to transmit larger chunks of data over a potentially less-reliable connection. This can mean that your hardware spends more time re-receiving and re-transmitting signals that otherwise fall through the cracks as packet loss.

The way your VPN maintains its connection is also plays a role in the amount of battery it uses. For example, some VPNs run constantly in the background, while others connect on-demand.

Most VPNs are on-demand and only establish a connection when necessary. They may activate only when connecting to certain Wi-Fi or cellular networks, when using certain apps, or with respect to other fringe cases. These VPNs are the most power efficient since they can be configured to not connect when using trusted networks — these are the networks you likely spend most of your time around, such as your secured Wi-Fi at home.

Since on-demand VPNs aren’t active 100% of the time, this means your hardware gets breaks from the constant data transfers and encryption/decryption processes that typically keep your CPU and wireless radios busier than they need to be.

Always-on VPNs, on the other hand, are exactly what they sound like — a VPN that never relents from encrypting your data and making your hardware work overtime to keep your data secure, regardless of the type of internet connection you’re using and the apps you use. Consequently, they’re always hammering your battery.

The final factor to consider when taking a VPN’s battery footprint into account is your hardware setup. While most people just download an app and let all the encryption and decryption happen on-device, it turns out that this is perhaps the most inefficient way to do things, as it taxes the hardware of your battery-powered device.

Obviously, battery life is no object if you’re connected to a power outlet all day long, which is the case if you’re using a desktop computer; but it also applies to VPNs configured via your router instead of on the device itself.

You read that right — many modern routers support the ability to configure VPN connections in the router’s settings, which means the device that stays plugged in to the wall at all times can do all the heavy lifting while your mobile device(s) go about business as usual with no additional toll on their battery life.

People rarely use the above method, however it’s worth checking into if your router supports it. Keep in mind that VPNs configured via your home router will only shield your privacy when connected to your home Wi-Fi network. So while you may save battery when using your home Wi-Fi, you won’t have privacy abroad unless you configure an on-demand VPN on your mobile device for taking over when you leave the doorstep.

Tips for boosting battery life while using a VPN

While using a VPN will impact your mobile device’s battery life one way or another, there are some steps you can take to mitigate the effect. We’ll go over some of those below:

Limit VPN connectivity to when you need it most

You might be one of those privacy sticklers, and that’s okay; but chances are, you don’t need to be using a VPN 24/7. For example, if you’re at home on a well-secured Wi-Fi network, you probably aren’t being snooped on by outsiders.

The only reasons you might use a VPN at home is to spoof your location or hide internet activity from your internet service provider (ISP). Otherwise, you would only be using one to preserve your privacy on public networks, especially unsecured ones such as the password-free Wi-Fi networks you find at public locations.

Cellular networks are already battery-hungry, and your data is already encrypted when you use a 4G, LTE, or 5G cellular connection. Having said that, you can save some battery by configuring VPNs not to activate when you’re connected to a cellular network.

Of course, you may still want to use a VPN if you’re trying to spoof your location over cellular or hide internet activity from your ISP.

Taking advantage of these configurations can help you prevent unwanted battery drain by limiting it to unique circumstances as opposed to applying a VPN connection to every bit of your internet traffic.

Sometimes it’s unavoidable, but if you can avoid sitting somewhere with poor reception, be it Wi-Fi or cellular, then you should do it, especially when connected to a VPN.

If you have access to a room closer to the wireless router, then consider using it instead of the farthest room with the comfy sofa. Furthermore, try to be in range of nearby cellular towers, if possible, especially when a cellular network applies to your situation.

Set up a router-based VPN

If you can’t live without a VPN at home, then a great way to avoid eating up unnecessary battery life is to configure a VPN directly on the router itself.

This prevents your mobile device from doing all the heavy lifting to encrypt and decrypt data, and instead passes that responsibility to a device that’s hard-wired to a power source. Just keep in mind that you won’t be able to bring your VPN with you in this case.

Use a good VPN

When we say to use a “good” VPN, we mean to take advantage of one with a solid reputation. No-name VPNs are risky to use because you may or may not be able to trust the entity handling all your private data, and to make matters worse, they may not be as well optimized as a VPN from a trusted brand.

Optimization can reduce the battery footprint on your mobile device, so make sure to do your research before subscribing to a VPN service and read all the reviews you can.

Battery drain as a result of using VPNs is unavoidable because of how they work, but that doesn’t mean you can’t mitigate the effect.

By understanding how VPNs work, the different ways they impact battery life, and making choices about how, when, and where to use them, you can maximize battery life even while remaining private and secure as you connect to the internet with one.