AltServer is one of the most convenient ways to effortlessly sideload apps on your iPhone or iPad, and it’s also one of the easiest ways to install jailbreak apps like Odyssey, Taurine, and unc0ver. But perhaps not if you’ve installed today’s macOS Monterey 12.1 software update… 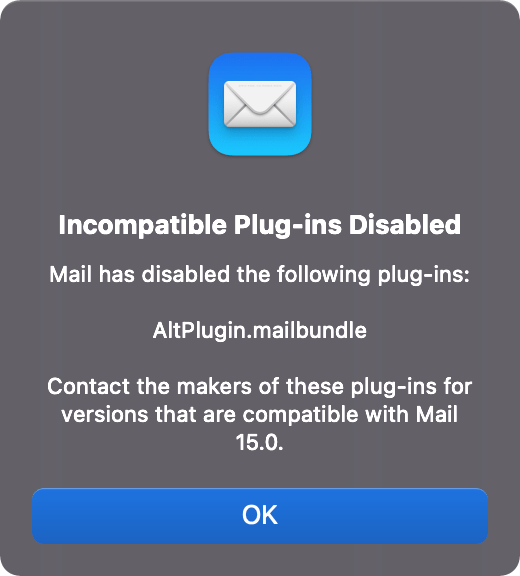 Indeed, it seems like Apple’s updated Mail app has once again broken the AltServer Mail plug-in, which means that users who upgrade to the latest version of macOS starting today will find themselves unable to utilize AltServer to sideload or re-sign apps with their Apple ID.

First spotted by /r/jailbreak users, and later confirmed by yours truly, updating to macOS Monterey 12.1 results in the prompt depicted above after trying to open and use AltServer to sideload apps.

This wouldn’t be the first time that a software update tampered with AltServer’s functionality, and it most certainly won’t be the last. The last time involved iOS & iPadOS 15.1, which required an update to properly support.

Users will be prompted with the above error whenever they try to toggle the AltServer plug-in from macOS’ native Mail app, and it essentially says that the plug-in is incompatible with Mail 15.0 and has been disabled until the developer can update it.

There’s no doubt that the AltServer developer is already well aware of this issue, and they’re probably looking into a fix as you’re reading this. Despite that, it could take some time before an official update rolls out, as AltServer updates typically endure a beta testing phase before being unleashed unto the masses.

If you haven’t already updated to macOS Monterey 12.1, and you depend on AltServer for your emulators, jailbreaking, or simple sideloading of apps, then you might want to steer clear until AltServer’s Mail plugin receives an update to resolve the incompatibility.

Those who’ve already updated are advised to be patient.

Are you upset that macOS Monterey 12.1 has broken the current version of the AltServer Mail plugin? Be sure to let us know your thoughts on the matter in the comments section down below.