In a rather unfortunate turn of events, it would appear that the popular Dynastic Repo repository, which has been commonly used for hosting jailbreak tweaks and other third-party add-ons, will be shutting down in the near future.

The announcement, shared in a blog post this Wednesday afternoon and echoed across the internet via Dynastic Repo’s official Twitter account, notes that the shutdown will happen next year. It also touches on what existing customers should expect in a post-Dynastic Repo world.

Fortunately, anyone who owns jailbreak tweaks or other packages purchased from the Dynastic Repo repository won’t lose access to their purchases. Those in charge of the repository say they’re working on an archival program that will ensure future access to those purchases for at least the next seven years:

Dynastic Repo goes on to explain that free packages will be automatically enrolled in the archival program, and that paid packages will need to be enrolled manually by the developer via an opt-in mechanism.

Developers and customers alike will soon receive correspondence in some form or another that alerts them to the upcoming changes, and as for users, the Dynastic Repo repository will continue business-as-usual operations up until 2022, at the very least.

It’s important to note that the Dynastic Repo repository is one of the largest repositories in use by the jailbreak community today, standing right alongside those such as Packix, Chariz, and even Twickd. In fact, it wasn’t long after today’s announcement that some competing repositories initiated attempts to lure both buyers and sellers from Dynastic Repo to their platform — here is one example of the Packix repository doing just that: 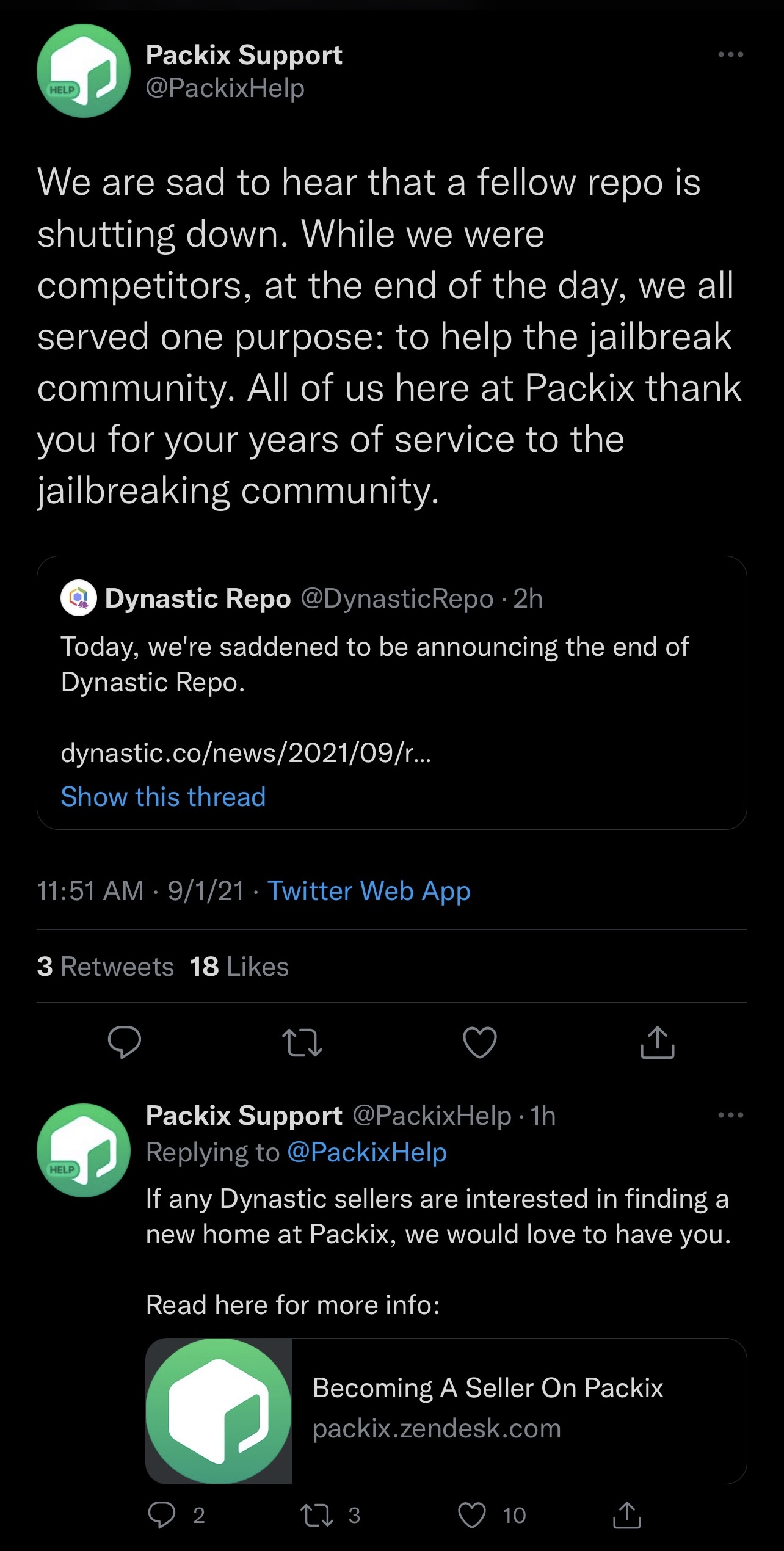 It’s not a bad thing that competing repositories are opening their arms to packages currently or previously hosted via Dynastic Repo; in fact, we’d argue quite the opposite. It just means they’re putting a contingency plan in place for buyers and sellers alike to prevent service interruptions for the community as one repository prepares to close its doors.

Dynastic Repo is far from the only repository to close its doors, but it’s noteworthy because it’s a large and popular repository. Previously, much larger repositories like ModMyi and ZodTTD/MacCiti had also shut down, but archives of packages previously hosted there are still available.

The closure of a big repository like Dynastic Repo is a sad day indeed, but it’s far from the end of the world — or jailbreaking. In fact, an increasing number of developers are opting to host packages on their own personal repositories as it offers more freedom to them as opposed to accepting the costs and terms and conditions of another larger repository.

Third-party repositories are easy to find while browsing online databases such as iOS Repo Updates or Parcility.

Are you sad to see the Dynastic Repo repository go? Discuss in the comments section down below.