If you’ve ever noticed the name of an application on the left side of your iPhone or iPad’s Status Bar after being jolted from one app to another, then you’ve witnessed what Apple calls a Breadcrumb link. This handy link lets you get right back to the app you were just using when you’re finishing in the app you were just jolted to.

I really like the concept behind Breadcrumb links, but if there’s anything that really grinds my gears about them, it would be the fact that they can sometimes remain in the Status Bar even after you’ve forcefully closed the origin app. Tapping on the Breadcrumb link is often the only way to get rid of it, and then this would would re-launch that app whether it was needed or not.

This tiny inconvenience compels a love/hate relationship between Breadcrumb links and I, and with that in mind, I’m particularly excited about a new and free jailbreak tweak release called ByeBackgroundBreadcrumbs by iOS developer PopsicleTreehouse, as it appears to solve at least one of my primary complaints with the feature.

Once installed, if I forcefully close the origin app from the App Store and then continue using the subsequent app, the Breadcrumb link goes away. This effectively prevents me from having to tap on the Breadcrumb link to make it go away, which would otherwise needlessly launch an app that I may or may not need to use.

ByeBackgroundBreadcrumbs adds a dedicated preference pane to the Settings app where users can toggle the tweak on or off on demand and choose individual apps that they wish to disable the tweak’s functionality for: 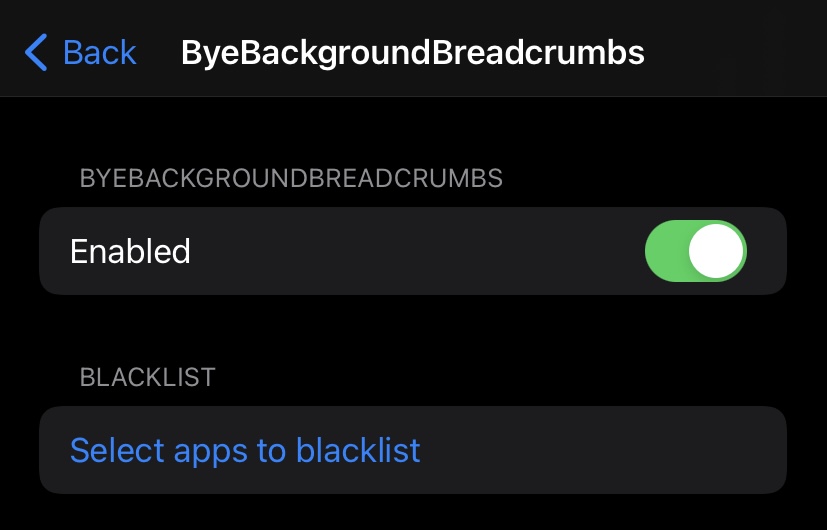 ByeBackgroundBreadcrumbs is certainly a niche tweak, but if you can’t stand the rough edge described in the fringe use case above, then this tweak is for you.

If you’re interested in giving ByeBackgroundBreadcrumbs a try, it’s available for free from the Packix repository via your preferred package manager and appears to support jailbroken installations of iOS 13 and 14. What’s more is the tweak is open source on the developer’s GitHub page.

Do you think ByeBackgroundBreadcrumbs will benefit your iPhone or iPad usage? Let us know in the comments section down below.