On Monday, we reported on Apple’s point update release of iOS 12.5.1 for older devices which cannot run iOS 13 and higher. The only stated change in the update was a fix for a bug in the COVID-19 exposure notifications feature, which Apple had previously added to older firmwares to allow more device owners to make use of it.

Although the release notes didn’t mention any other changes, it would not have been unusual for Apple to have taken the opportunity to patch the vulnerabilities used by iOS 12.x jailbreaks, such as the Chimera jailbreak for iOS 12-12.5. The update could also have rendered the jailbreak tool unusable accidentally. Unrelated changes in the firmware, or hard-coded firmware support in the Chimera app itself, could also have required an update to the tool for it to work again.

With this in mind, we cracked out our agèd pensioner of an iPhone 5s, which had been jailbroken on iOS 12.5 with Chimera, and DFU restored it to iOS 12.5.1 to put the matter to an empirical test. The results are in, and I’m sure our legacy jailbreakers will be happy to hear that Chimera 12-12.5 works out of the box on the new firmware, with no changes required. 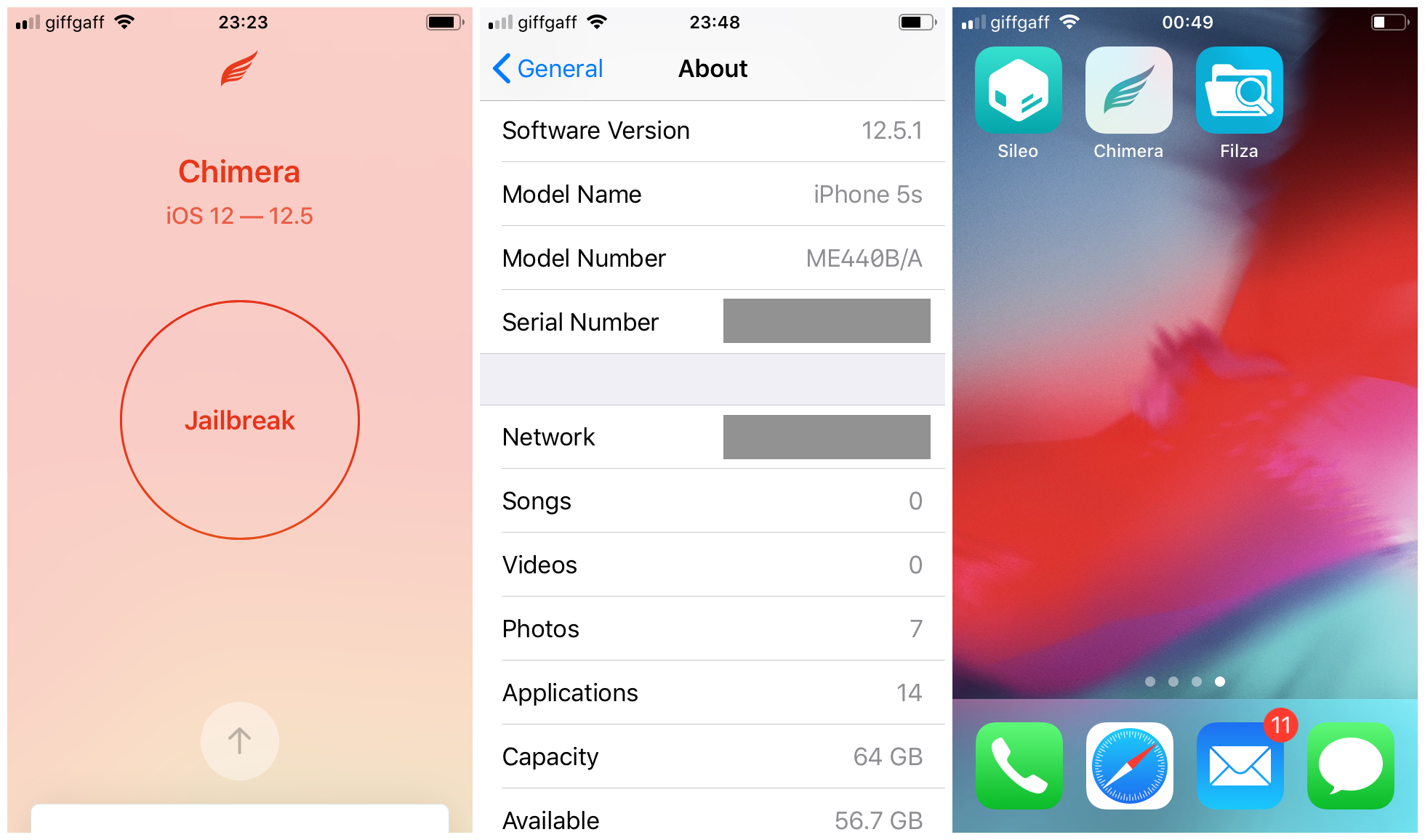 As you can see from my screenshots above, the device jailbroke successfully on iOS 12.5.1, and the Chimera app, Sileo package manager, jailbreak apps such as Filza File Manager, and tweak injection, all work as before.

At the time of writing, the Chimera website still lists only the firmware range iOS 12-12.5 as compatible, but iOS 12.5.1 can be safely added to that list. If you’d like to update your iOS 12.5 devices, be sure to grab the latest version of Chimera (1.6.0 at the time of writing) from the official website:

It’s generally good practice to keep your device on the newest firmware, for security reasons. For jailbreakers, that rule tends to be amended:

Keep your devices on the newest firmware which you can jailbreak.

Although in this case the need is less urgent, given that there don’t appear to be any further bug fixes or features in iOS 12.5.1, it is still nice to know that you can take advantage of the COVID-19 exposure notifications bug fix, without sacrificing your jailbreak for it.

Chimera creator Coolstar has posted a message on his Discord server, confirming the iOS 12.5.1 support, and may update the website to reflect it at some point in the future.

We couldn’t find any examples of people who had personally tested jailbreaking iOS 12.5.1 in the wake of his statement, so we decided to confirm the support ourselves as a matter of practicality. You can now update legacy devices at your leisure without worrying about any unpleasant surprises on the other side.

As iOS 12.5.1 may very well be the last update which iOS 12 and legacy devices receive, Chimera may now be safe from patching, and may be available as a permanent jailbreak for all iOS 12 devices for the duration of their lifespan. Users on iOS 12.0.x, 12.1.x, 12.2.x, 12.3.x, and 12.4.x should all consider making one final upgrade to iOS 12.5.1, to reap all the iOS 12 bug fixes and feature updates in one go, before re-jailbreaking on iOS 12.5.1 and letting their devices enjoy their retirement.