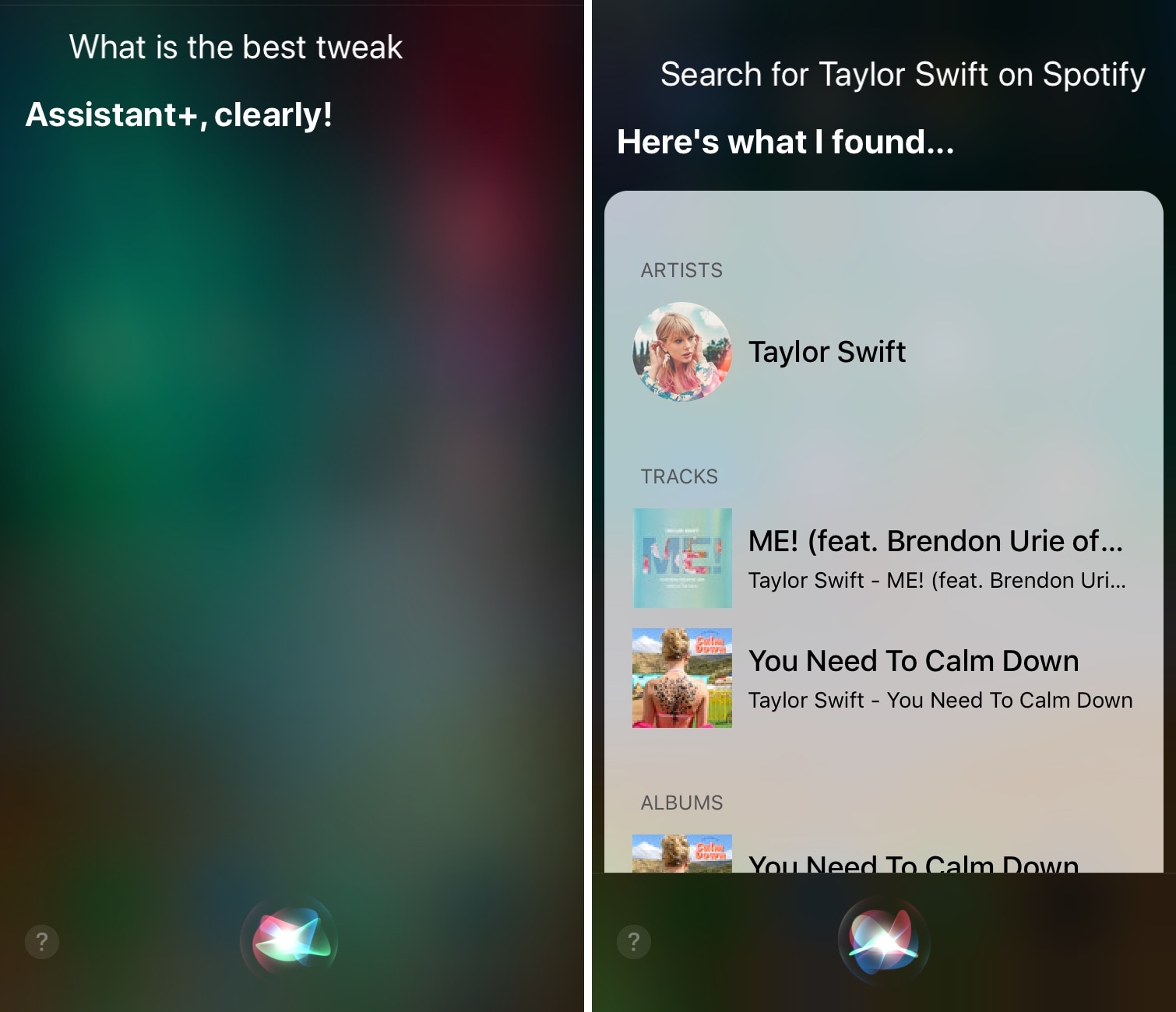 If you have a jailbroken handset at your disposal and you feel like Siri is a bit underpowered out of the box, then you just might come to appreciate a newly-released jailbreak tweak called Assistant+ by iOS developer Zaid Elkurdi.

From what we can gather, this tweak brings a plethora of personalization options to the Siri voice assistant, empowering users to assign custom actions and responses to almost any query they can think of.

Citing the tweak’s depiction, users could use Assistant+ to do any of the following:

– Integrate with apps that don’t natively support Siri. For example, you can launch into Yelp with a search, or open a bookmark in Chrome
– Want to automate something complex? You can execute a Shell script and dynamically pass in parameters based on what you say
– Send any command you want to a web server, or even send a Wake On Lan “magic packet” to your computer when you say, “Wake up my computer”
– Use Siri in the car? You can create an Activator listener to turn off Wi-Fi, turn on Bluetooth, turn up the volume, and open Spotify when you say, “Start car mode”
– Unlock your phone with a custom phrase
– Have a smart home or smart devices? You can create far more advanced commands to control your devices, or even control devices that aren’t Siri-compatible, like smart TVs
– Have a routine you’d like to simplify? You can do things like turn on Do Not Disturb, lower your brightness, and open your sleep tracker when you say “I’m going to bed”
– Translate the text in your clipboard using Google Translate, or shorten a link with Bitly
– Annoyed that Siri doesn’t dismiss itself? You can set up an Activator listener to automatically dismiss Siri after certain commands.
In addition, all triggers support wildcards so, for example, (.*)start car mode(.*) will match “Hey Siri start car mode please”, “Please start car mode”, “Start car mode Siri”, etc.

It’s worth noting that Assistant+ integrates with Ryan Petrich’s powerful Activator extension, which permits users to assign Siri queries to specific Activator actions of their choosing. Additionally, Assistant+ works with Shell scripts and can understand dynamic parameters, which provides oodles of flexibility for the more advanced power-users who demand more from the Siri experience. 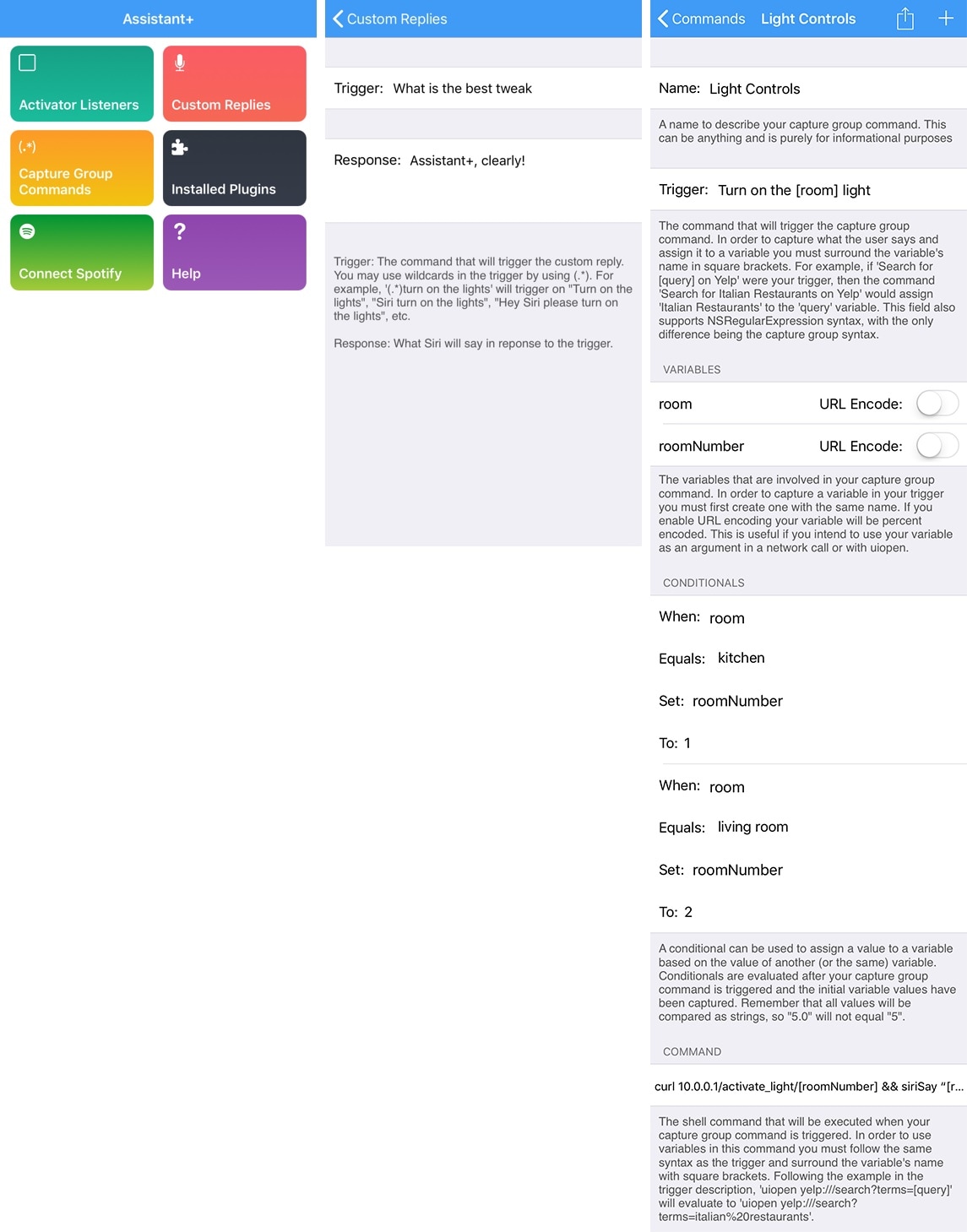 You’ll notice just how in-depth the tweak gets in the latter screenshot examples, permitting comprehensive configurations that go as far as to follow conditional statements and execute Shell commands.

Whether you’re a novice or a power user, Assistant+ brings useful new features to the table. Those interested in trying it out can download it from the Packix repository in Cydia or Sileo for just $2.99.

Assistant+ does plenty out of the box, but jailbreak developers will be able to create custom extensions for the tweak that can expand its functionality, and as a power user myself, I find this to be particularly interesting to say the very least.

Will you be adding Assistant+ to your jailbreak tweak arsenal? Let us know in the comments section below.