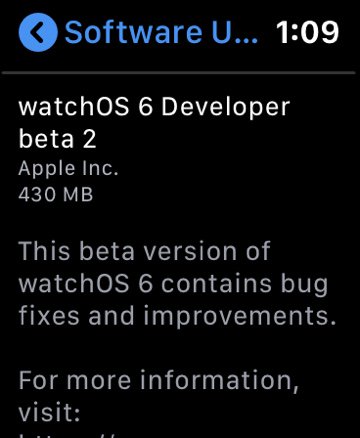 Recently, Apple seeded the latest beta of watchOS 6. As is par for the course, many of the new features Apple included were unpacked after its release, including a pretty big addition that’s still, unfortunately, limited for now.

Jeremy Horwitz took to Twitter after the latest beta of watchOS 6 was seeded to developers, sharing some screenshots of what appears to be an over-the-air software update mechanism coming to the smartwatch’s operating system. As Horwitz puts it, it looks like Apple is setting the building blocks in place to offer direct-to-Apple Watch software updates, which could see the feature launch with watchOS 6 later this year.

Sure seems like the stage is being set for direct-to-Apple Watch software updates in watchOS 6, though it hasn’t been fully freed quite yet from the need to approve things on the iPhone. pic.twitter.com/pf3wBC3vU5

With this in place, Apple Watch owners will be able to go to into the Settings app on the Watch itself and then choose General –> Software Update. When checking, it works like it does on the iPhone, which means the Apple Watch will check for any available software updates on its own, and download them if available.

However, as noted by Horwitz, folks will still need to review and accept the updated terms and conditions on their iPhone to actually get the new software completely installed on the smartwatch. It’s possible that this step in the process is just a part of the beta, and Apple could remove it for the public watchOS 6 launch this fall.

What do you think? Is this a feature the Apple Watch needs? Does the smartwatch need to be untethered to better handle software updates? Let us know in the comments.