Key Apple suppliers—TSMC, the sole supplier of Apple-designed mobile chips, and Foxconn, which assembles iPhones—today reported strong November revenue, but that didn’t stop Bloomberg from pushing its narrative that the latest lineup is “falling flat with global consumers” as “iPhone concerns persist”.

The trick is in the conjunction “as”, which click-hungry bloggers resort to whenever they wanna combine two unrelated stories into a single, speculative narrative that might drive clicks.

TSMC and Foxconn have recorded a healthy six percent jump in November revenue, helping assuage investor fears about iPhone performance because growth in the smartphone sector has been virtually flat for a couple of quarters now.

Foxconn’s November revenue of NT$601.4 billion, or $19.5 billion, was their record for the month. It is this rise in revenue that has taken their January-November sales growth to almost sixteen percent, marking the fastest pace of annual growth for Foxconn in years.

Earlier stories by the likes of The Wall Street Journal and Bloomberg, predominantly based on comically inaccurate reporting by Japan’s Nikkei, have spelled doom for Apple because a handful of suppliers did report weaker-than-expected results but disregarded the fact that Apple sources components from multiple suppliers.

PLEASE BUY OUR PHONE WE REALLY DON’T WANT TO ADD ANOTHER LINE OF TEXT TO OUR HOMEPAGE pic.twitter.com/MwXffUN0ZW

Things are different with Foxconn and TSMC. Foxconn assembles the vast majority of iOS devices while TSMC is Apple’s exclusive manufacturer of chips. While both companies count other technology giants as their clients, Apple is their #1 source of revenue. Therefore, TSMC’s and Foxconn’s rise in November revenue most likely points to strong iPhone sales.

The “bad news is piling up for Apple” media narrative has been coined and relentlessly advanced by Bloomberg reporter Mark Gurman, who took stories of alleged production cuts and supplier woes as the basis for portraying Apple as a technology company on the decline. 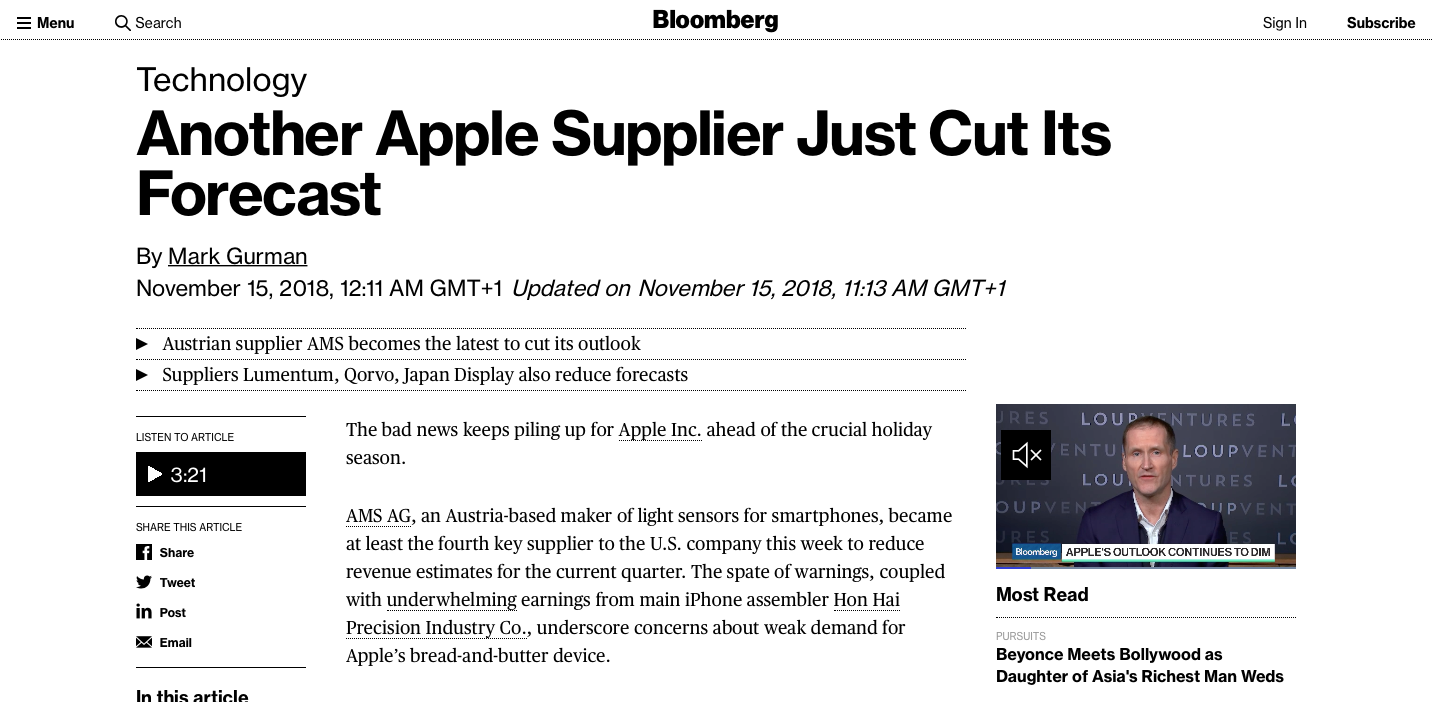 Last week, Gurman published another iPhone panic mongering piece, framing Apple’s Give Back trade-in program which it’s been using to boost sales as being a “fire drill” and “a possible admission” that the new iPhone XS and iPhone XR modes “may have been selling below some expectations,” which is an incredibly speculative reporting style for a news gathering organization of Bloomberg’s caliber.

The entire front page of Apple’s homepage is now the $449 XR and $699 XS trade in pricing deal – all other products that are usually below are removed. pic.twitter.com/1rV500AkoH

For the sake of completeness, AppleInsider did that story the right way.

After reaching out to its sources within Apple, the publication has learned that Apple’s marketing moves are a “normal seasonal response to expected consumer trends” and not at all a “fire drill” as described by Gurman. If you’ve been following Apple for a while, you’ll recall this isn’t the first time Apple has resorted to aggressive marketing tactics and promotions to stimulate iPhone sales.

Gurman ought to know better than to quote Gene Munster.

In response to pundits who insist that Apple has never resorted to such aggressive marketing promotions for new iPhone models which have been on sale for just a few short weeks, wasn’t it Steve Jobs himself who in 2007, in an effort to help the phone take off in a meaningful way, ordered that the handset drop to $400 from $600 only two months after it first went on sale?

I rest my case.