Apple this afternoon disclosed its [fiscal] Q4 earnings report, offering a look at its performance over the past 3 months. During the period, the company sold nearly 47 million iPhones and earned just under $63 billion in revenue. Here’s a full breakdown of the numbers.

Here are this quarter’s numbers compared to those from Q4 2017:

And here are comments from Tim Cook and Apple CFO Luca Maestri:

“We’re thrilled to report another record-breaking quarter that caps a tremendous fiscal 2018, the year in which we shipped our 2 billionth iOS device, celebrated the 10th anniversary of the App Store and achieved the strongest revenue and earnings in Apple’s history,” said Tim Cook, Apple’s CEO. “Over the past two months, we’ve delivered huge advancements for our customers through new versions of iPhone, Apple Watch, iPad and Mac as well as our four operating systems, and we enter the holiday season with our strongest lineup of products and services ever.”

“We concluded a record year with our best September quarter ever, growing double digits in every geographic segment. We set September quarter revenue records for iPhone and Wearables and all-time quarterly records for Services and Mac,” said Luca Maestri, Apple’s CFO. “We generated $19.5 billion in operating cash flow and returned over $23 billion to shareholders in dividends and share repurchases in the September quarter, bringing total capital returned in fiscal 2018 to almost $90 billion.”

And finally, here’s an overview of the numbers: 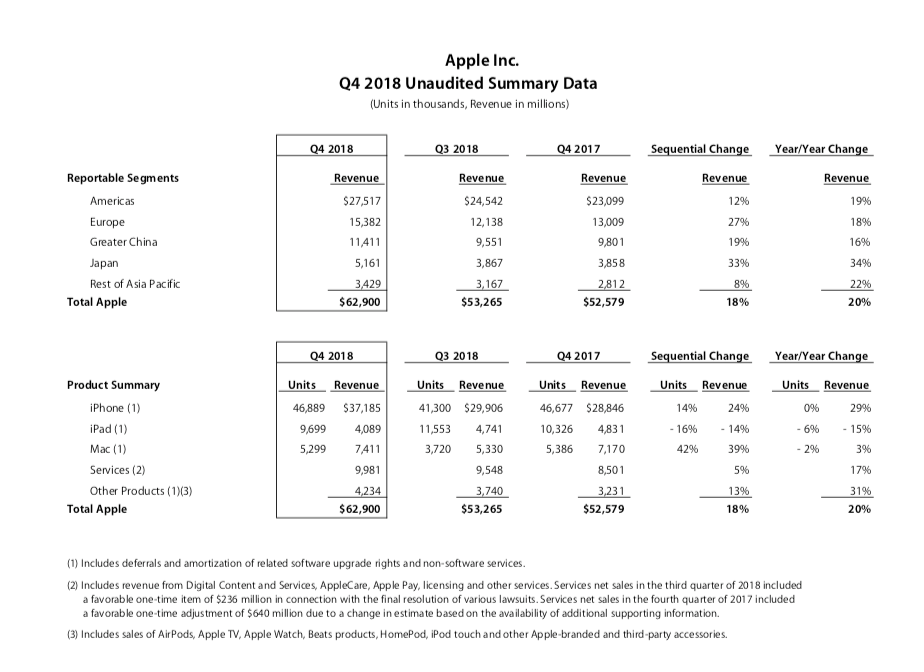 For the most part, Apple met or exceeded Wall Street expectations, but a lower than anticipated revenue forecast for the upcoming holiday quarter has investors a bit worried. AAPL shares were down 4% at the time of publishing. The company’s conference call begins shortly.