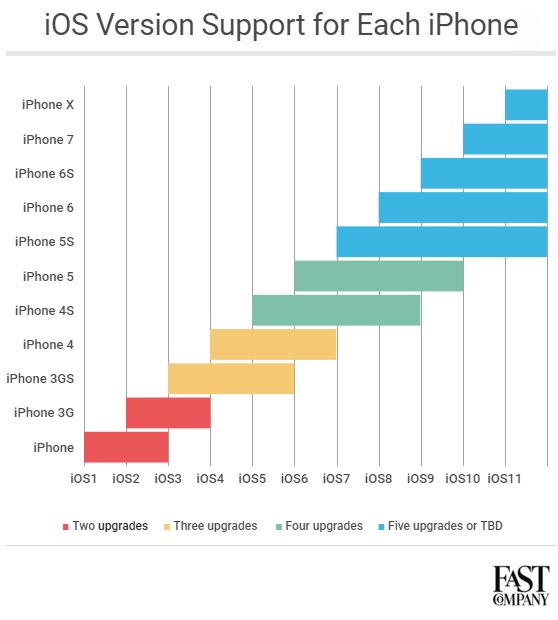 Lots of ink has been spilled criticizing Apple’s supposed planned obsolescence, a conspiracy theory claiming iOS updates deliberately slow down older iPhones as a way of nudging people to buy the latest model. This chart by Fast Company’s Jared Newman proves the opposite.

“I didn’t realize this until charting it, but the number of iOS upgrades that each iPhone gets has increased every two years since the original launch,” he commented on Twitter.

As you can see for yourself, the original iPhone and its successor, iPhone 3G, received two major operating system updates each. iPhone 3GS and iPhone 4 got three updates each: iPhone 3GS ran iOS 3, iOS 4 and iOS 5. Its successor supported iOS 4, iOS 5 and iOS 6.

iOS version support for each model has been steadily increasing as Apple continued refreshing iPhone hardware with faster, speedier internals. This has been especially true since iPhone 5s, the industry’s first smartphone which came outfitted with a 64-bit chip, called A7.

Apple A7, the industry-first 64-bit mobile chip, debuted in iPhone 5s 5 year ago

A7 sported Apple’s custom CPU core based on the ARM instruction set rather than use off-the-shelf ARM designs like the previous iPhones. As this integration between Apple’s software, hardware and silicon teams tightened, iOS started supported even older models.

iOS 12 is the perfect example.

“For iOS 12, we’re doubling down on performance,” Apple’s senior VP of Software Engineering Craig Frederighi said in June. According to Apple, iOS 12 launches apps 40% faster. The keyboard comes up 50% faster, and swiping to Camera from the Lock screen happens 70% faster on older devices with iOS 12 over iOS 11.

From the onset, iOS 12 was designed to improve performance on older Phones and iPads, and it clearly shows: the hardware requirements for iOS 12 are exactly the same like those for iOS 11—iOS 12 runs on hardware dating as far back as iPhone 5s and iPad mini 2.

ROUNDUP: All then new features in iOS 12 & how to use them

iOS version support for each iPhone even benefits from so-called “S” upgrades, like iPhone 5s, iPhone 6s and iPhone XS. These retain the industrial design of the previous generation while focusing on internal improvements in terms of the CPU, GPU and so forth.

No matter how you look at it, a 2018 mobile OS supporting a five-year-old smartphone is unheard-of in this industry. No other company supports their phones in software for that long. This is virtually non-existent in the Android world where vendors would have you rather buy a brand-new phone than bother giving you extra features by way of free software updates.

And I think Apple isn’t getting nearly enough recognition that it deserves for supporting what in the Android world would have been classed as hopelessly outdated hardware.

What are your thoughts on this chart and planned obsolescence in general?