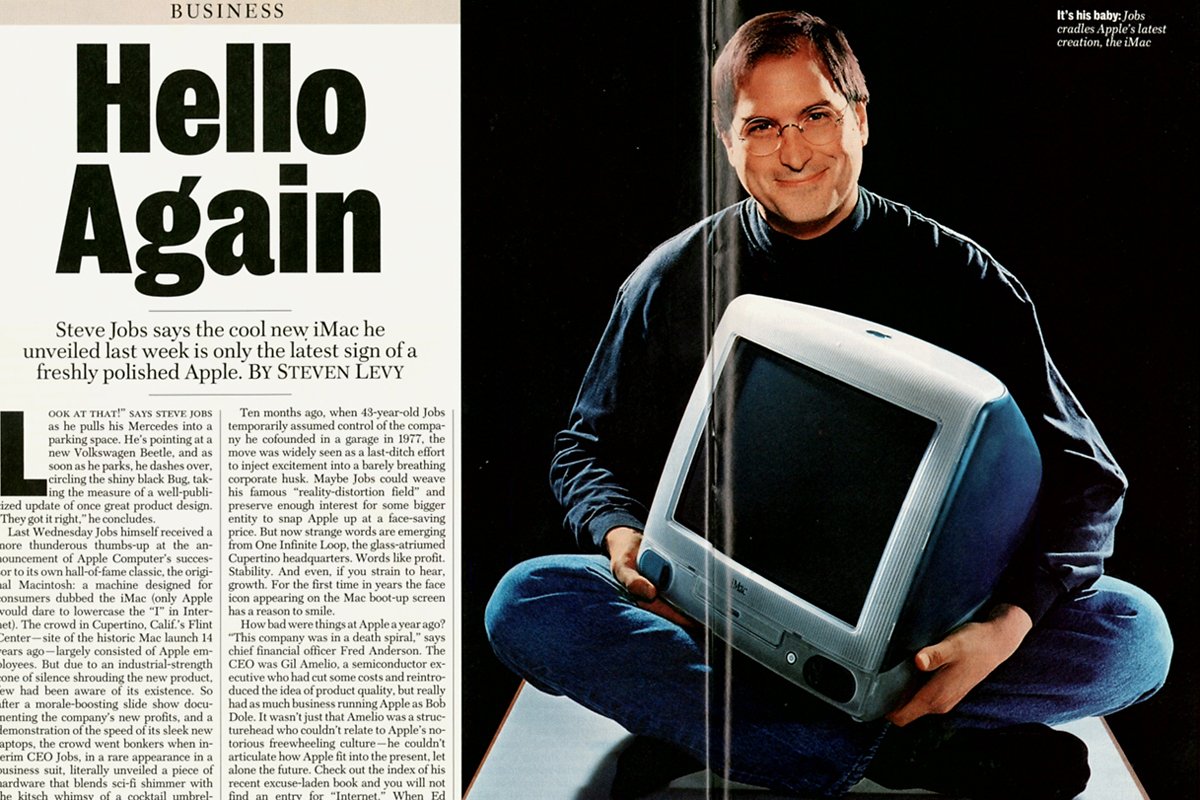 20 years ago today, Steve introduced the world to iMac. It set Apple on a new course and forever changed the way people look at computers.

Those are not my words. This is what Apple CEO Tim Cook tweeted out this morning in celebration of the twentieth anniversary of the original iMac, an all-in-one computer that has been key to Apple’s consumer desktop offerings since its debut in August 1998.

When 43-year-old Jobs returned to Apple back in 1997, the firm was in a death spiral. Having assumed control of the company he co-founded in a garage, Jobs went on to nix many projects but an all-in-one computer for the then emerging Internet thing wasn’t one of them.

Here’s how Jobs pitched iMac at the unveiling:

This is iMac. The whole thing is translucent. You can see into it. It’s so cool. We’ve got stereo speakers on the front. We’ve got infrared right up here. We’ve got the CD-ROM drive right in the middle. We’ve got dual stereo headphone jacks.

We’ve got the coolest mouse on the planet right here. All of the connectors are inside one beautiful little door here—the Ethernet, the USB stuff. Around the back, we’ve got a really great handle here. The back of this thing looks better than the front of the other guys, by the way.

Here’s the original iMac announcement at the Flint Center, which is the same theater where Jobs unveiled the original Macintosh back in 1984.

The computer would go on to become a hit with consumers with its distinct, friendly design and colorful appearances. It is widely credited with helping save Apple—despite ditching the then ubiquitous floppy drive and switching to an all-new I/O technology, called USB.

The iMac design has since evolved through seven distinct forms.

Ken Segall, an employee at an LA ad agency handling Apple’s account, originally came up with the name “iMac” and pitched it to Steve Jobs, who wanted to brand the desktop computer as “MacMan.” The “i” in the iMac name stands for “Internet” because the computer was originally designed to make it easy for customers to get on the Internet right out of the box.

Here are some ads for the original iMac that stuck with me.

The “i” prefix would be adopted later across Apple’s many hardware and software products, like iBook, iPod, iTunes, iPad, iPhone and more. To me, the original iMac has not only saved the company from oblivion, but changed the way consumers think about personal technology, leading up to the iPhone and iPad devices being the clearest expressions of that.

20 years ago today, Steve introduced the world to iMac. It set Apple on a new course and forever changed the way people look at computers. pic.twitter.com/GbKno7YBHl

Have you owned an iMac?

If so, can you describe your experience using an all-in-one computer for the first time?