Apple this afternoon disclosed its [fiscal] Q2 2018 earnings report, offering a look at its performance over the last 3 months. The company beat Wall Street expectations in just about every category, selling 52.2 million iPhones and earning $61.1 billion in revenue. Here’s a full breakdown of the numbers.

Here are this quarter’s numbers compared to those from Q2 2017:

And here are some comments on the numbers from Tim Cook and Apple CFO Luca Maestri:

“We’re thrilled to report our best March quarter ever, with strong revenue growth in iPhone, Services and Wearables,” said Tim Cook, Apple’s CEO. “Customers chose iPhone X more than any other iPhone each week in the March quarter, just as they did following its launch in the December quarter. We also grew revenue in all of our geographic segments, with over 20% growth in Greater China and Japan.”

“Our business performed extremely well during the March quarter, as we grew earnings per share by 30 percent and generated over $15 billion in operating cash flow,” said Luca Maestri, Apple’s CFO. “With the greater flexibility we now have from access to our global cash, we can more efficiently invest in our US operations and work toward a more optimal capital structure. Given our confidence in Apple’s future, we are very happy to announce that our Board has approved a new $100 billion share repurchase authorization and a 16 percent increase in our quarterly dividend.” 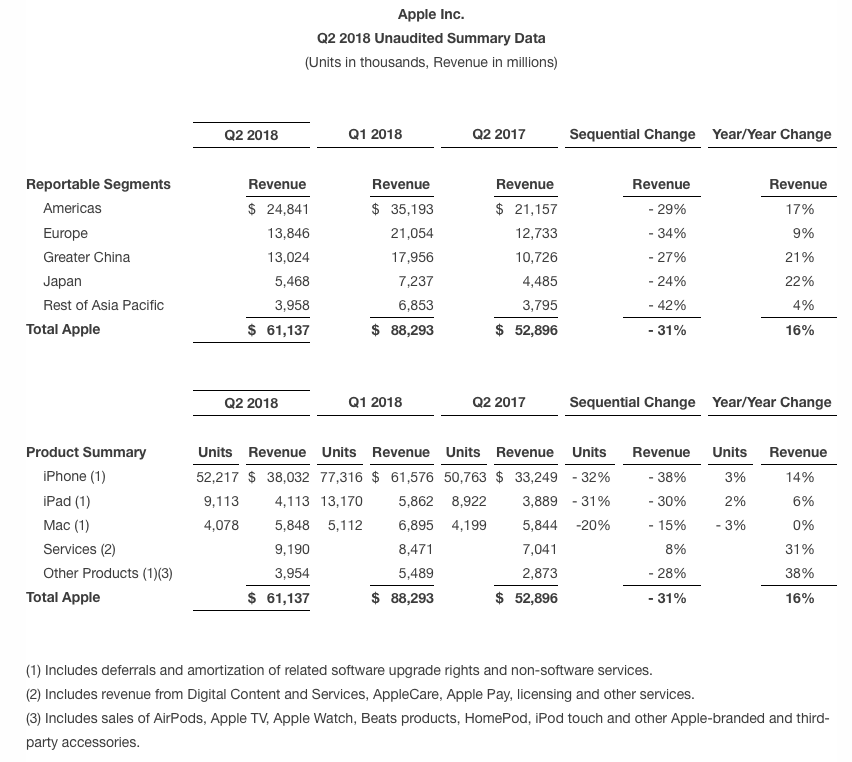 This was just a monster quarter for Apple. Not only did it beat Wall Street expectations across the board, it also announced another $100 billion in stock buybacks and a 16% increase in dividends, and gave strong guidance for Q3. At the time of writing, the stock was up 3% in after hours trading.

Stay tuned for our roundup of highlights from Apple’s earnings conference call.