Apple on Thursday reported its [fiscal] Q1 2018 earnings, offering a look at its performance over the last 3 months. The company beat expectations in revenue, earning $88.3 billion, but fell short on iPhone sales at 77.3 million. Here’s a full breakdown of the numbers.

Here are this quarter’s numbers compared to those from Q1 2017:

“We’re thrilled to report the biggest quarter in Apple’s history, with broad-based growth that included the highest revenue ever from a new iPhone lineup. iPhone X surpassed our expectations and has been our top-selling iPhone every week since it shipped in November,” said Tim Cook, Apple’s CEO. “We’ve also achieved a significant milestone with our active installed base of devices reaching 1.3 billion in January. That’s an increase of 30 percent in just two years, which is a testament to the popularity of our products and the loyalty and satisfaction of our customers.”

“Thanks to great operational and business performance, we achieved all-time record profitability during the quarter, with EPS up 16 percent,” said Luca Maestri, Apple’s CFO. “Cash flow from operations was very strong at $28.3 billion, and we returned $14.5 billion to investors through our capital return program.” 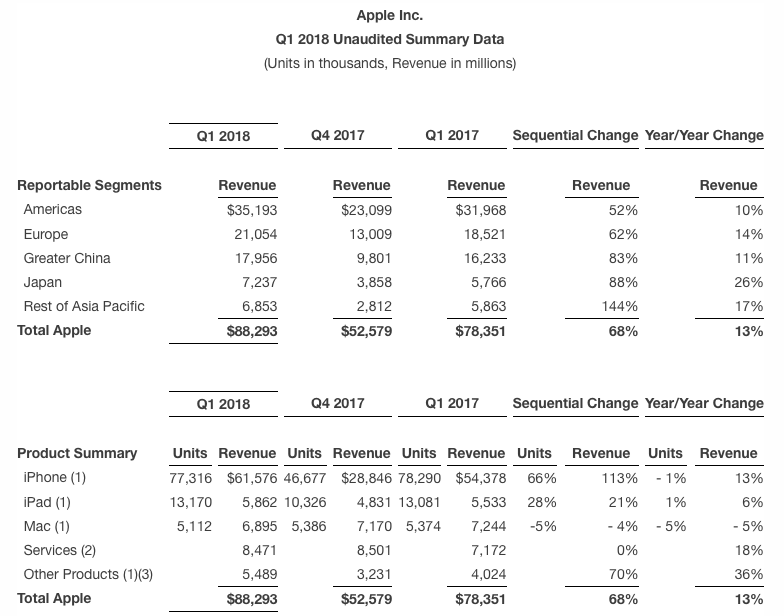 Apple is providing the following guidance for its fiscal 2018 second quarter:

That forecast is well below what analysts were expecting for Apple’s Q2 2018 guidance, so get ready for a rocky couple of months. For now, Apple should be starting its conference call shortly, so stay tuned to iDB for more highlights from its Q1 earnings.