Tracking and mapping your runs to a T is something most of us runners do, mainly because it provides valuable insights into your training progress. At the same time, there is something to be said about archiving runs for posterity and having the ability to review and show off older running tracks. The likes of Nike+ or Runtastic – i.e. the big players in the game – have recognised the immense potential of route tracking years ago and beefed up their apps accordingly.

A key caveat with those behemoth apps is the coerced reliance on them: in order to map and share your routes, any major app will insist you use their interface during the actual run as well. D’oh! you might think, and to some, this is not a massive sacrifice. To others however it’s a trade-off decision they grudgingly make.

Personally, I have grown fond of the simplicity of Apple’s Workout app on my Apple Watch and am content with its GPS tracking – but find myself wishing for a feature to share routes with fellow sports.

Runners Maps sets out to abstract the battle of the running platforms by separating the two key features major apps typically conflate: the running companion itself and the subsequent mapping and sharing.

In simpler terms, Runners Maps gives you the freedom to use whichever app you love the most during your workout, then grabs the data and feeds it into its own, bipartisan map. The third-party app deftly leverages iOS 11’s newly granted access to its HealthKit data, which enables the collection on neutral grounds. Runners Maps makes a point proclaiming that no sensitive data is being accessed or uploaded during the process.

Now that we have warmed up, time to get to the nitty gritty. What – and perhaps more crucially who – is this thing good for?

First and foremost, it’s an uncomplicated place to save and size up your own workout routes. Runners Map extracts recorded runs from any running app (provided they sport HealthKit integration themselves) after the fact and lets you ‘favorite’ your longest or best outdoor adventures. The second on-screen button, upload, really brings us to the heart of the matter, which is likewise accessed via the Discover tab. No matter if the most recent run or an older route, Runners Maps facilitates one-touch sharing of your routes with the community and runners worldwide. 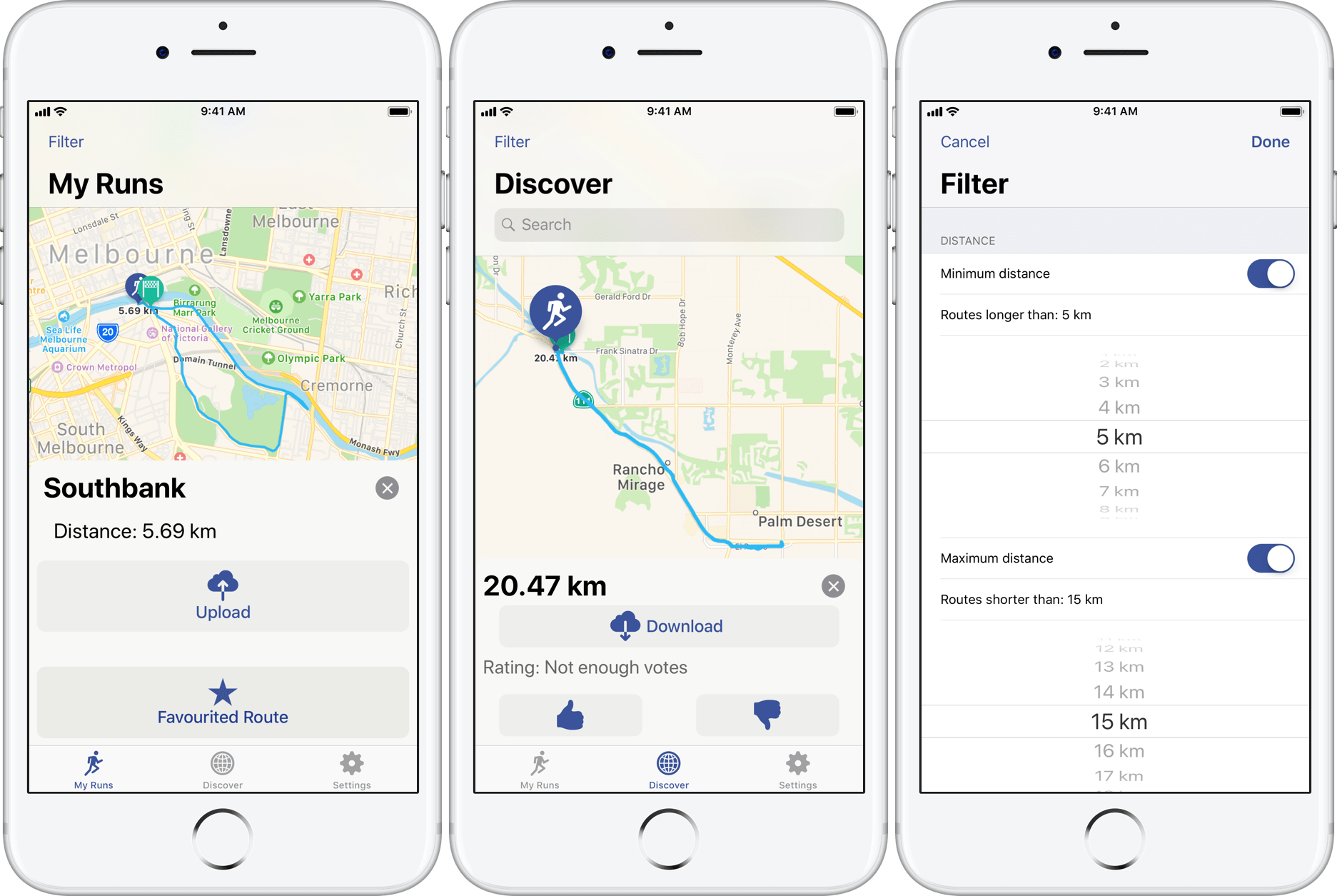 While the idea to learn of the most popular running locations in a place otherwise unbeknown to you is not without precedence, Runners Map’s bloat-free, and above all unaffiliated approach certainly is. Filters to apply to the map are still few and far between, but the most important one – running distance – can be toggled on to define lower and upper distance limits. Another upside with Runners Map is that the app can be used retroactively and you do not need the presence of mind to hit a button before you start your jog.

Who should consider giving this app a crack? At this point in time, I can think of two and a half good use cases for it. Everyone enjoys a good scratch map and if you love to leave a visible mark on locations you have conquered in your trainers, this is an easy way of doing it. Next, there’s the altruistic motive to let fellow runners in on your favorite tracks. If you know some mean routes and want to help others discover them, uploading them through Runners Map is a breeze.

Reason two and a half should naturally be number three, however owing to the app’s young age its database of run entries still comes up a little too short to sincerely plug it as such to you. Especially in the US, you’re basically looking at a clean slate with a few exception depending on your location. This is bound to change quickly – and already has in Europe – when the app picks up steam, but for now there remains a lot of route data collection to be done for all US runners out there.

Challenge accepted? In that case grab your trainers and get started on populating the map. A pro upgrade is available for $1.99, which at present purges the app from ads, but moreover promises functional enhancements and new features down the road. On an editorial note, here’s to hoping that tidbits like elevation information on tracks will be amongst said features in a future update.

If you want to give Runners Map a shake, download it on the App Store for free.