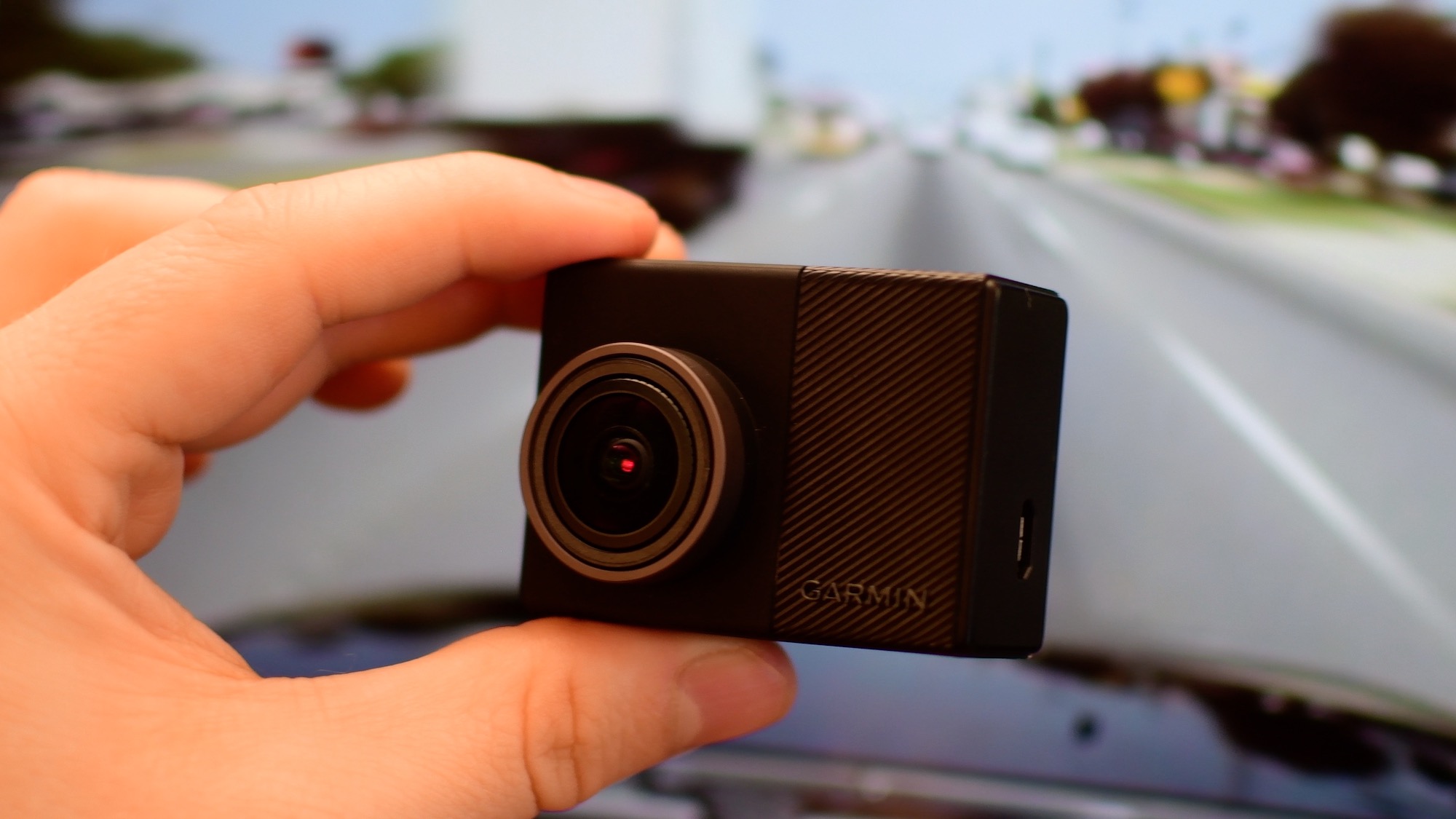 The dash cam market has been taking off in recent years.

In countries like India and Russia, these things are almost a necessity for drives. Dash cams definitely give you a piece of mind—in case you were ever in an accident, there is always video evidence of what happened.

This can help prove you aren’t at fault in some auto altercation and save plenty of money with your insurance. Garmin’s dash cams easily help with that, but they offer much more than the competition.

We took the Garmin 65W out on the road for some real world testing, so be sure to check out our hands-on video to see it in action, as well as some high-definition footage we captured using the accessory.

In the box you will find your camera, a power cord and an additional mount—a fairly straightforward affair.

The camera itself is small, roughly the size of a GoPro. The front is predominantly occupied by a large 180-degree lens. On the left side, you have a micro USB port for charging the camera. On the back, there is a large LED display and a small light that signifies when the camera is recording. The bottom houses a micro SD card slot, and then on the right hand side is a quartet of buttons to control the camera.

I do have a small problem with the included power cord though it’s more of a minor annoyance than anything. You see, the micro USB cord is actually connected to the power adapter (the part that plugs into your cars cigarette lighter/DC power outlet) so you have a single cord + power adapter combo. 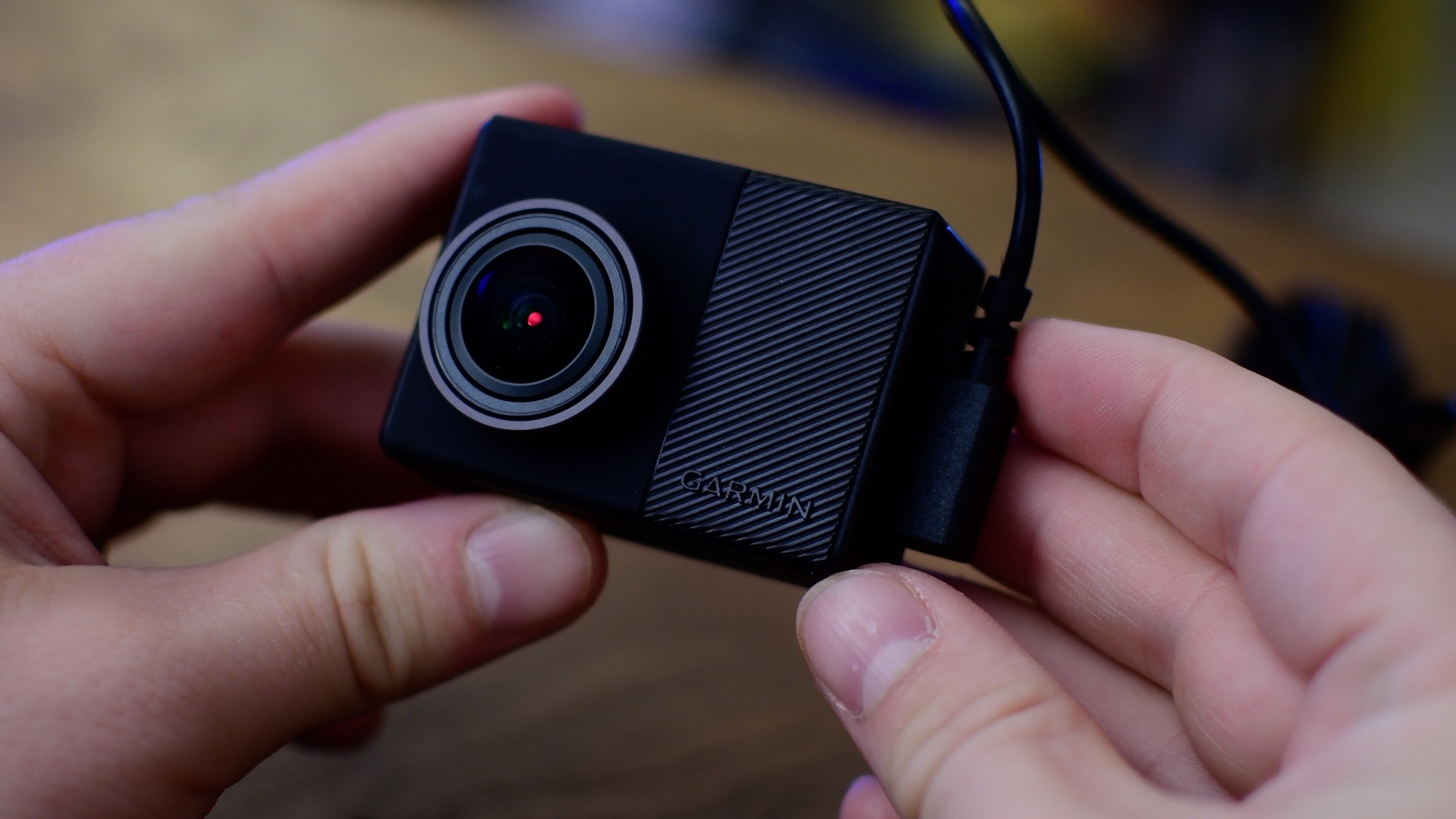 The reason that is an issue, is many people already use that outlet.

For instance, I have a 2-port USB auto charger—one could go to the dash cam and the other can go to my phone. Since these are connected together, that isn’t an option. Sure, you can just get another micro USB cable, but the included one is long and has a 90-degree end to it, which makes it perfect for your camera and harder to find an acceptable aftermarket solution.

The menu system is exceptionally easy to navigate on the camera, which I very much appreciate. Upon first boot, you’ll need to make a few selections such as tall/short vehicle and left/center/right placement on your car. The four buttons on the right let you go back, forward, up and down.

The menus are very shallow so you don’t have to dig too much to find what you’re looking for.

A dash cam is useless if it doesn’t handle the basics well. The 180-degree field of view is exceptional and requires that you place the camera quite a bit forward in your dash in order to prevent catching the edges of your car in the recording.

All the footage is automatically saved to the micro SD card, and will loop and delete the oldest footage as it fills up. At any point, you can hit the save video/photo option, or even use voice control to prevent certain clips from being erased. 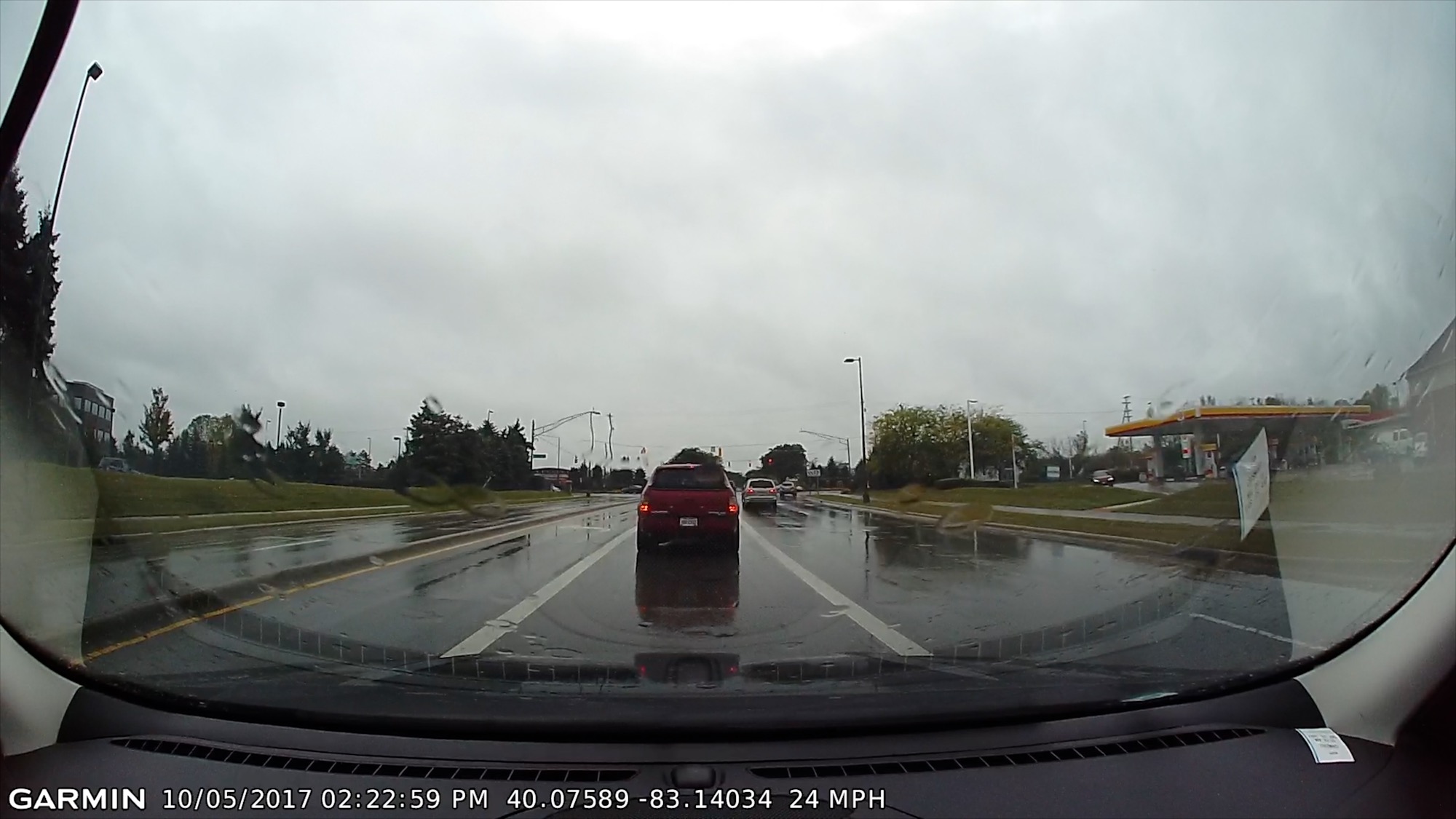 You can access the content from the gallery, straight from the memory card, or using the Wi-Fi share feature. Thanks to the built-in accelerometer, the camera will automatically save any footage from collisions it detects automatically.

I was very surprised how stable and clear the footage looked out of the camera. It excelled during both day and night. In fact, these were probably the best looking recordings from the half dozen dash cameras I’ve tested. Garmin also adds optional info along the bottom of the video with date/time, lat/long and current speed.

Garmin also includes a medley of smart features that are fairly handy for distracted drivers. There are alerts for lane departure, collision warning and continuing traffic. I was actually surprised at how fast these alerts were. I assumed they would have quite a bit of delay, but I was wrong.

They still had their downsides. 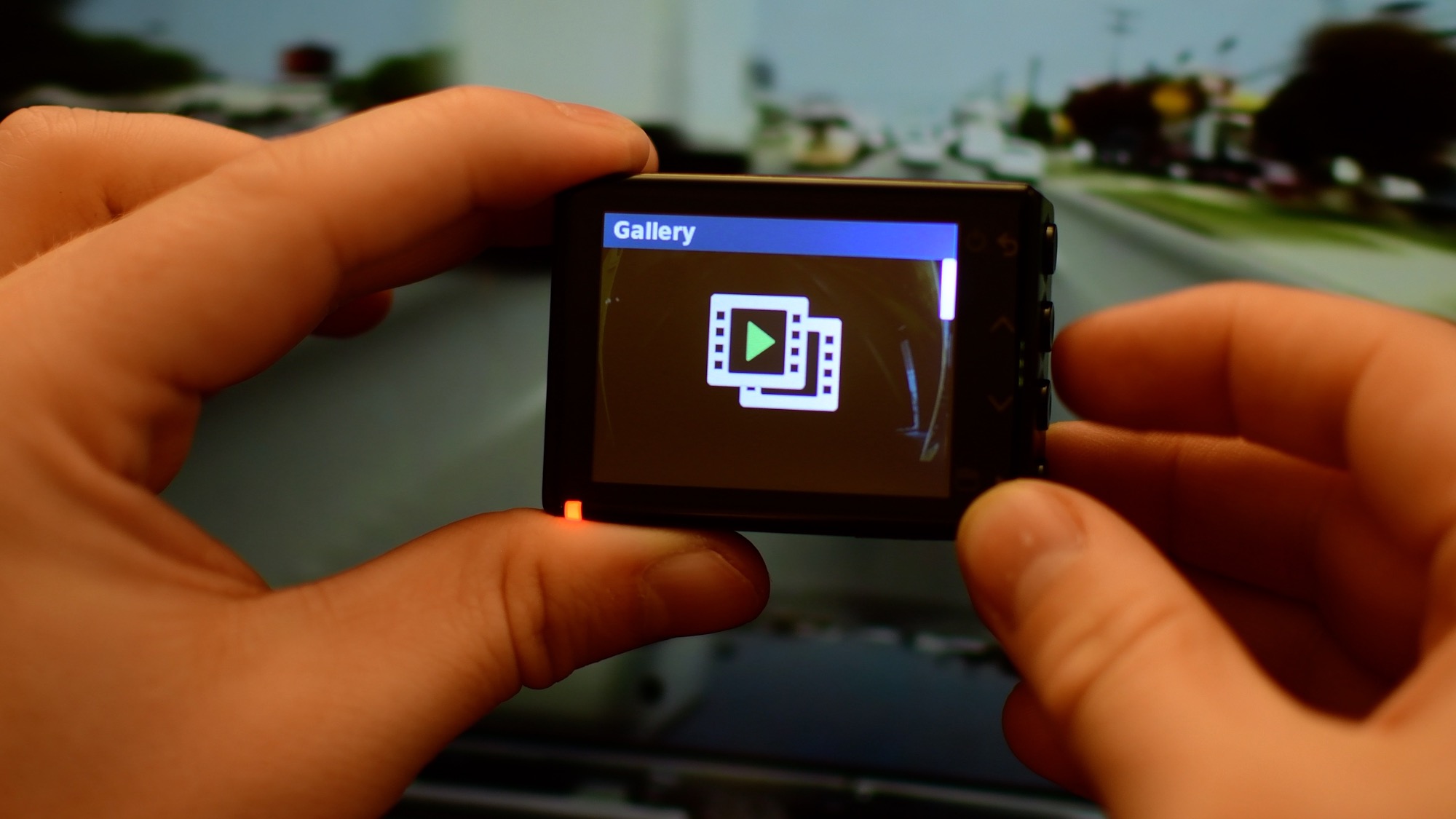 I found them less than reliable in the rain, often not triggering at all. I also noticed that the collision warning and lane departure were triggered frequently during regular city driving when you’re usually close to cars and switching lanes frequently.

I ended up turning off lane departure and collision warning, but I did leave on the traffic alert. It was the most useful of the three, especially as many new cars have the other alerts built-in. The traffic alert is great for when you are at a stop light, or stop and go traffic, and you don’t pay enough attention.

Garmin will beep and let you know the car in front of you is moving again so you don’t hold anyone up.

The device also features voice control. Just say “Hey Garmin” and it will give you a list of voice controls to choose from. These were very handy and by far one of my favorite features.

This optional feature lets you use your dash cam as a security camera while the car is parked although it requires a special power cord that can keep it running while the car is powered off. The camera will film any time anyone moves around your vehicle. This is especially handy if you’re parked in front of your house, or in a busy parking lot where someone could back into the front of your car.

Travelapse is another unique feature. The camera will record your trip, then automatically compile it into a useful time-lapse video. Of course, you have to tell it when to start and stop the travelapse to take full advantage of it. 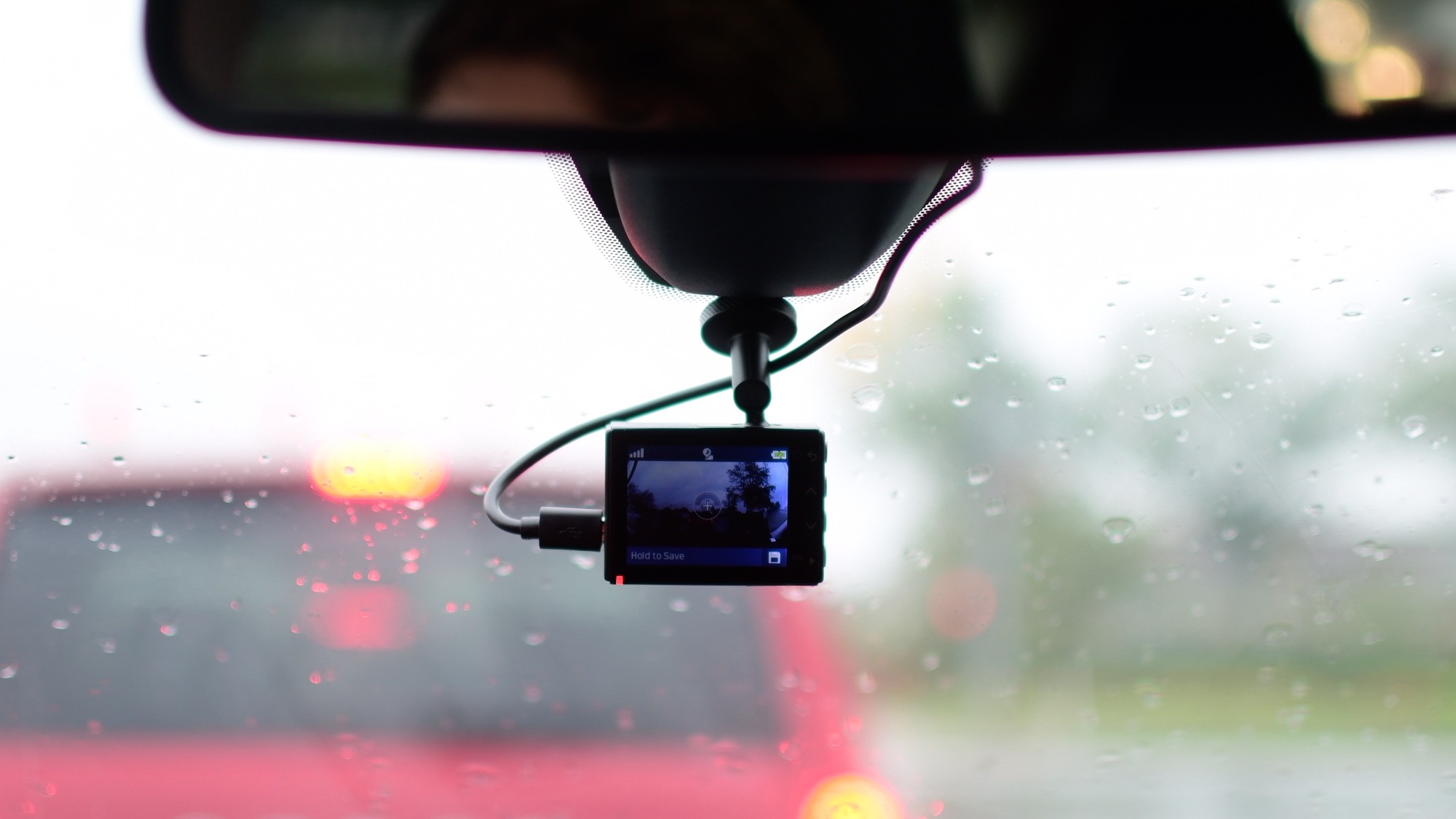 Since all the footage is saved, you could just make your own. That said, it’s pretty fun to have the camera do all the heavy lifting, and you just export the finished video from it.

I recently had to use some of my dash cam footage when a car veered to the right and hit the side of my car. That little micro SD card saved a lot of time, hassle and money by making it clear who was at fault and what really happened during the incident.

I think they can also be fun as well. For instance, travelapses are a great way to share long road trips with friends and family. Of course, clips of crazy drivers are also fun to share online and believe me—there are plenty of those.

Garmin makes a compelling option with an expansive feature set not seen in many other dash cams. If you’d like to pick one up for yourself, you can find it on Amazon for $249.

Let us know your thoughts below.