At a press event Wednesday, Google unveiled its new hardware lineup headlined by the new Pixel 2 and Pixel 2 XL smartphones boasting a new squeeze feature and no headphone jack.

Before we get to it, watch this promotional video for a quick overview of the few new things made by Google: the Pixel 2, Home Mini and Home Max, the Pixelbook touchscreen notebook, wireless Pixel Buds, a tiny Clips camera and an improved Daydream View VR headset.

Read on for a brief description of the new gadgets.

The second-generation Pixel lineup includes both a five-inch (1080p LCD screen) Pixel 2 and a six-inch (Quad HD OLED screen) Pixel 2 XL with the same features in each model, including Android 8.0 Oreo, a rear-mounted fingerprint sensor and a new Active Edge feature that requires users to squeeze the device to invoke Google Assistant or use other gestures to quickly access common features.

Rather than use Qualcomm’s Snapdragon 836 chip, the new Pixels use the same Snapdragon 835 chip found in Galaxy S8, LG V30 and OnePlus 5, and come outfitted with 4GB of RAM and 64GB of storage. For the first time, however, the Pixels are dust and water-resistant.

The new Google smartphones have their own portraiture photography mode that achieves Apple-like depth-of-field effect with just one camera lens, thanks to Dual Pixel technology (the effect is available on both rear and front camera). Google boasted the fact that the new Pixels achieve a higher score of 98 from DxO than Apple’s latest iPhones.

Other new features include a preview of Google Lens, the ability to recognize songs being played with on-device machine learning (no network connectivity needed whatsoever), always-on displays with 1000:1 contrast ratios and more.

In another dig at Apple, Google posted a video explaining how to switch from an iPhone.

Preorders for the $649 Pixel 2 and the $849 Pixel 2 XL start today. For a limited time, each Pixel 2 purchase will come with a free Google Home Mini, a $49 value, as well as free and unlimited Google Photos storage.

Pixelbook is a $999 hybrid notebook from Google running Chrome OS.

It features a 12.3-inch touchscreen, a ten-hour battery life, built-in Google Assistant an optional $99 stylus accessory and more. The convertible notebook can be folded into a tablet-only mode with the keyboard on the back.

With Fast Charge, a quick 15-minute charge gives you two hours of run time. The notebook is 10 millimeters thick and weighs in at 1kg. Preorders for the $999 device start today ahead of the October 31 launch.

The optional Pen stylus is an extra $99. Additional configurations with beefed up internals will be available soon.

This is Google’s answer to AirPods.

A quick ten-minute charge provides about one hour of listening time. 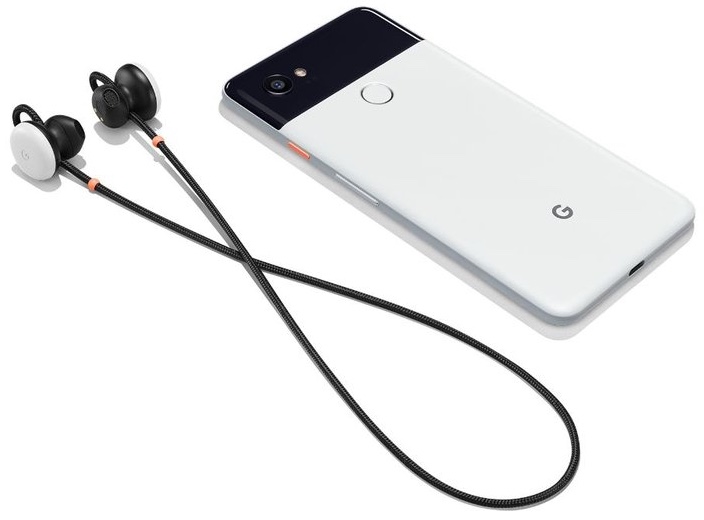 The Buds have a mic, an accelerometer sensor and a capacitive touchpad to invoke Google Assistant with a tap. There’s also a built-in translator feature that requires a Pixel phone. 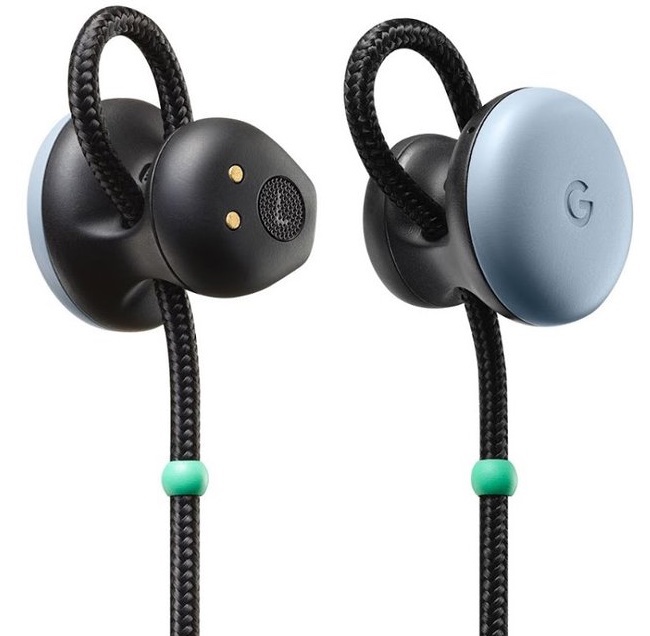 Available in Black, White and Blue, the Pixel Buds are priced at $159 and are available today.

Covered in semi-transparent cloth, the budget-priced Home Mini is only $49 and has a touch surface, LED lights in “Google listening” colors and layout, plus a microphone switch.

The premium $399 Home Max has a speaker system twenty times more powerful than the regular Home with two 4.5-inch high-excursion woofers, a pair of 0.7-inch tweeters and a new SmartSound technology that dynamically adapts the speaker to the room it is in.

It can be used horizontally or vertically. It works with other Google Home speakers and Chromecast devices, supports Google Cast, Bluetooth and auxiliary input and lets you stream music from YouTube Music, Spotify, Google Play Music, Pandora and iHeartRadio.

You can pair two Home Max speakers together for more powerful sound. Each Home Max purchase will come with a free 12-month subscription to YouTube Red, which includes an ad-free YouTube Music subscription.

You can join the waitlist today as the speaker won’t arrive before December.

Powered by machine learning and artificial intelligence, this hands-free camera is aimed at parents and families who want to capture their kids’ and pets’ best moments. It constantly records and analyzes footage for seven-second moments to record, sending the clips to a phone while editing and curating them for you.

You activate the camera by twisting the lens and putting it down (a blinking light indicates it’s recording). Taking advantage of machine learning, it learns faces and even pets over time.

With premium two-toned fabric and custom-designed lenses, Google’s enhanced virtual reality headset gives you the widest field of view yet. It provides robust tracking even in low-light conditions, and 60 frames per second rendering of augmented reality objects.

Other perks include photo/video capture with playful emojis, dubbed AR Stickers (a Pixel-exclusive feature), branded content such as “Stranger Things” characters, the “Star Wars: The Last Jedi” pack, the NBA Stars pack and the cast of “Saturday Night Live”.

Available in Fog, Charcoal and Coral finishes, the new Daydream View headset is available for preorder today at $99 ahead of its launch “later this year” in the US, UK, Canada, Germany, Australia, India, Italy, France, Spain, Japan and Korea.

From now until the end of the year, every purchase of Daydream View will come with a bundle of top games (US, UK and Korea only).

Google is really invested in making its hardware as compelling as it can possibly be. What do you say, boys and girls? What new Google gadgets are you most impressed with, and why?

Plan on buying any of these?

Sound off in the comments below!