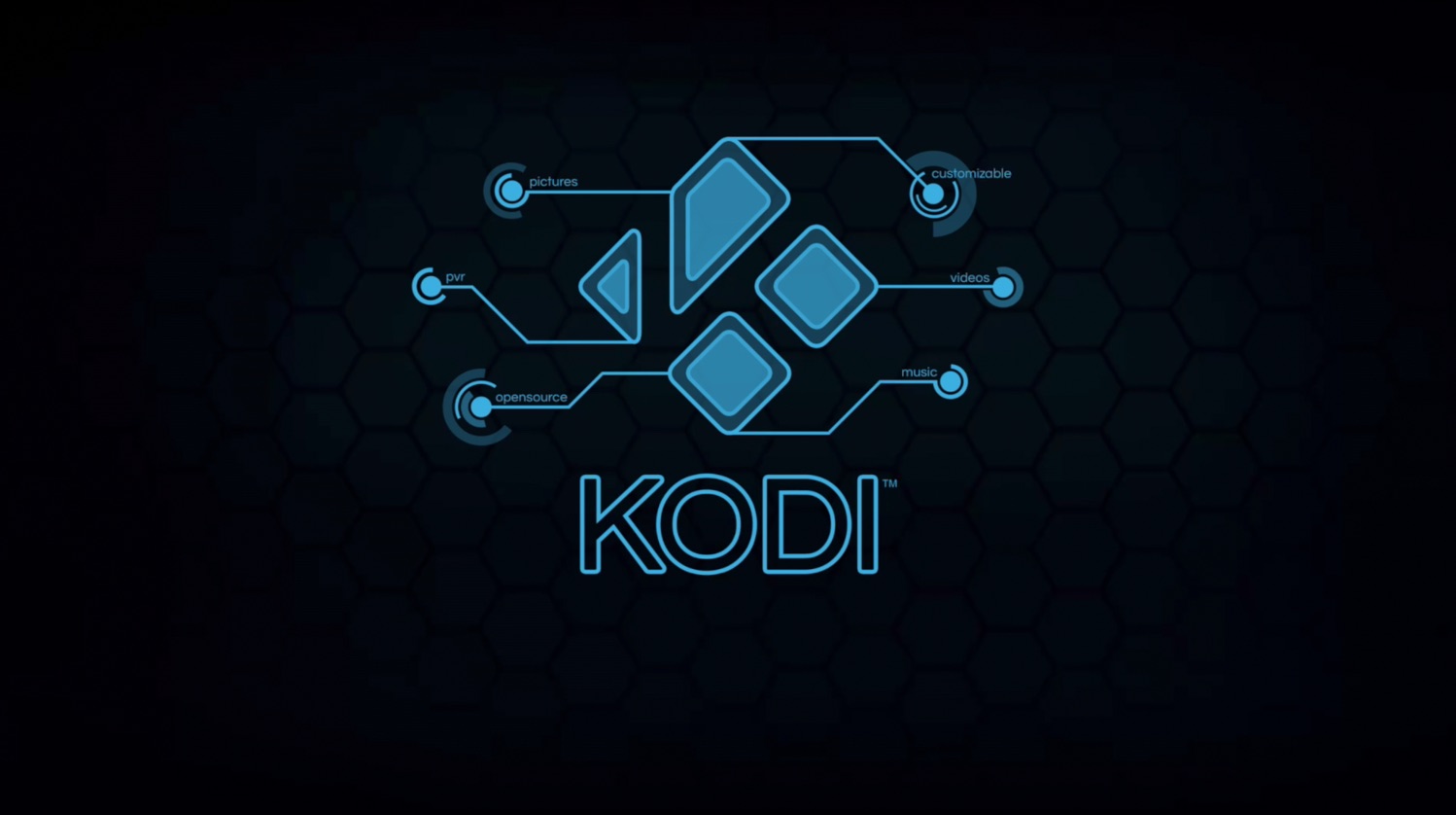 Kodi, previously known as XBMC, is an open source media player, and a veritable one-stop shop for all your media needs. Whilst it has been a favourite of Apple TV users for a long time, there is not always a recent tvOS release, and the process to install it has been complex at times. This guide gives the simplest process, without recourse to unofficial distributions.

It doesn’t require a jailbreak, and should work on both tvOS 10 and tvOS 9.

Before beginning, we give the standard disclaimer that we do not endorse piracy or copyright infringement, and we advise the use of Kodi only to play media to which you have a right. As Kodi themselves say:

“The official Kodi version does not contain any content whatsoever. This means that you should provide your own content from a local or remote storage location, DVD, Blu-Ray or any other media carrier that you own. Additionally Kodi allows you to install third-party plugins that may provide access to content that is freely available on the official content provider website. The watching or listening of illegal or pirated content which would otherwise need to be paid for is not endorsed or approved by Team Kodi.”

How to install Kodi on Apple TV 4

1) First, download the most recent build of Kodi from the official source.

2) Now download The Unarchiver for free from the Mac App Store. This little app can unarchive nearly all filetypes you might come across.

3) Once downloaded, double-click the Kodi.deb to unarchive it to a folder. If it’s opening as a text document instead, make sure you’re opening the .deb with The Unarchiver.

4) Look in the resulting folder for the file called data.tar.lzma. Double click it to unarchive it to a folder called data. 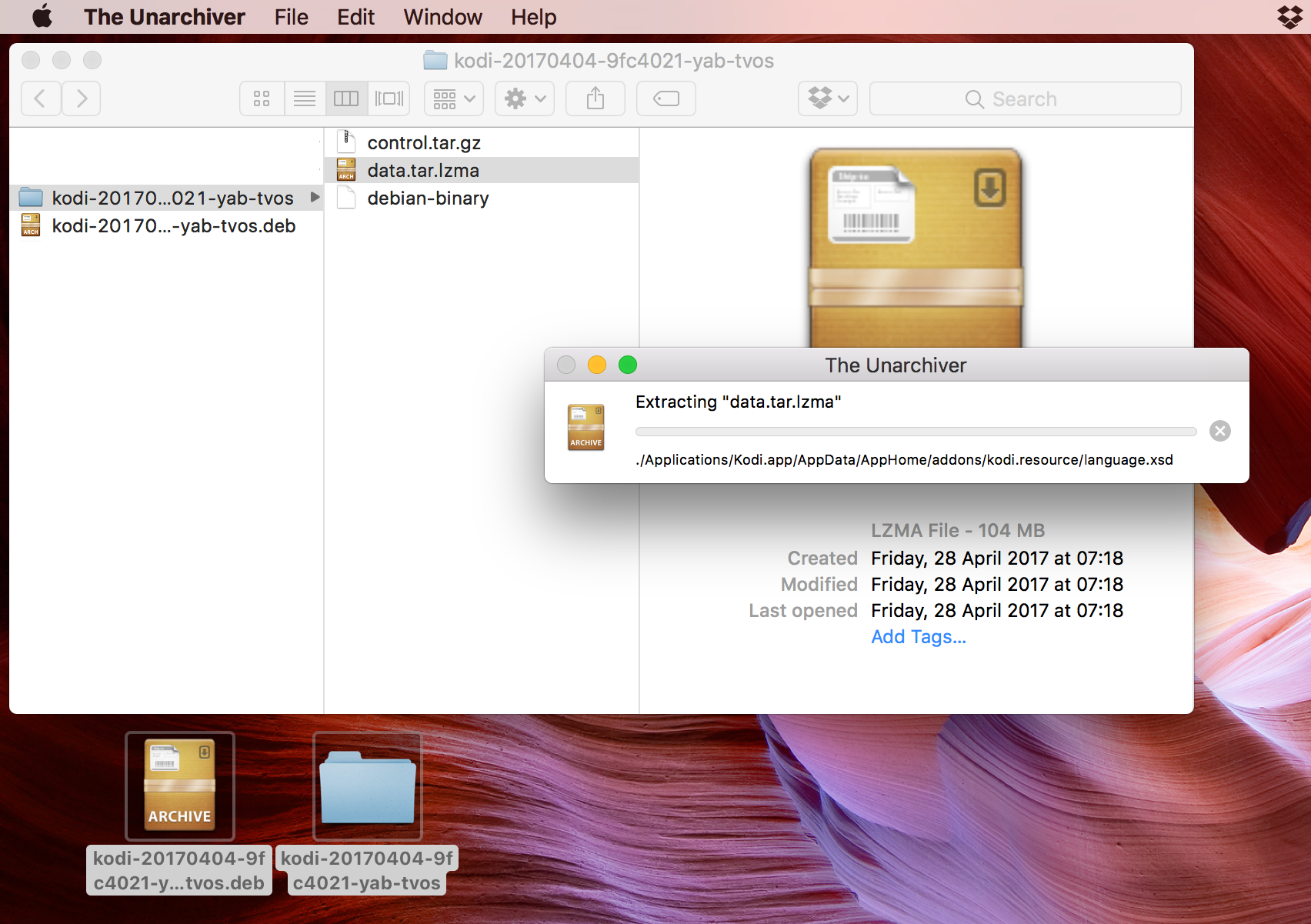 5) Look in data for the folder called Applications, then inside that for the file called Kodi(.app).

6) Make a new folder in the Applications folder, next to the Kodi.app, and call it Payload.

7) Drag Kodi.app into the Payload folder. 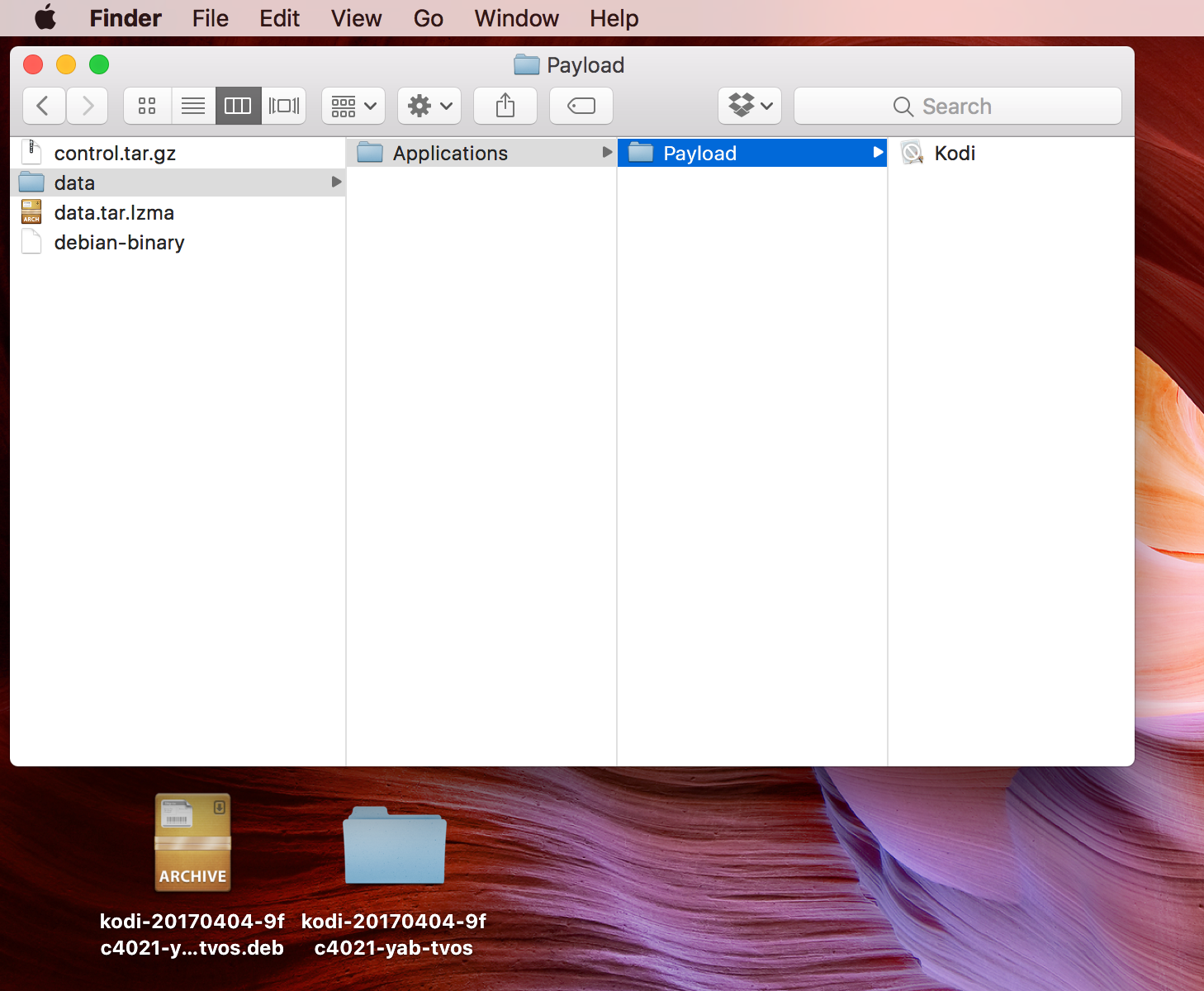 8) Right-click the Payload folder which now has Kodi.app inside it, and select the option Compress “Payload” to zip it up. 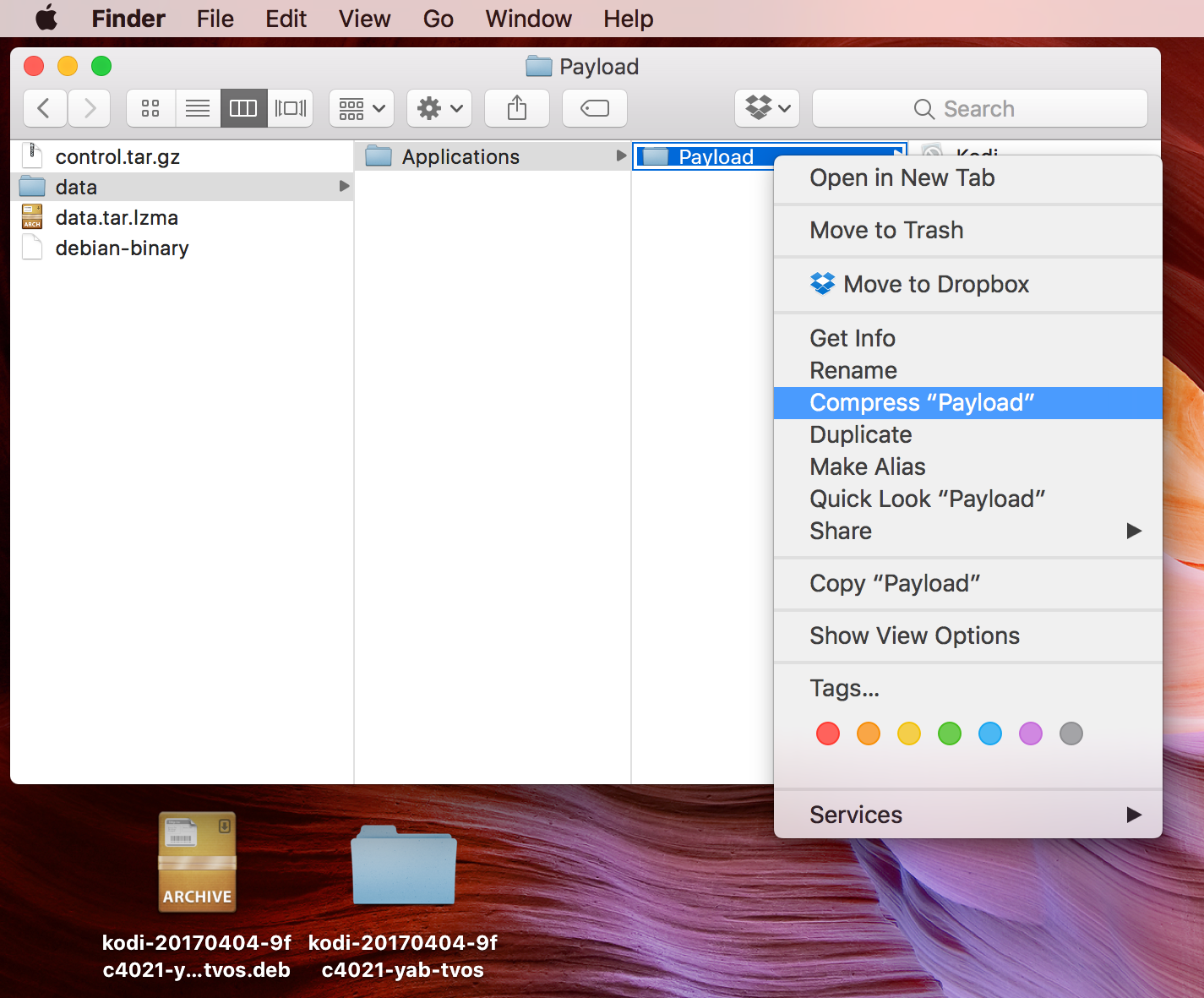 9) Once Payload has been successfully compressed into a .zip called Payload.zip, rename it to Kodi.ipa, or whatever name you prefer. Note, the filetype must be changed to .ipa instead of .zip regardless of what name you choose. 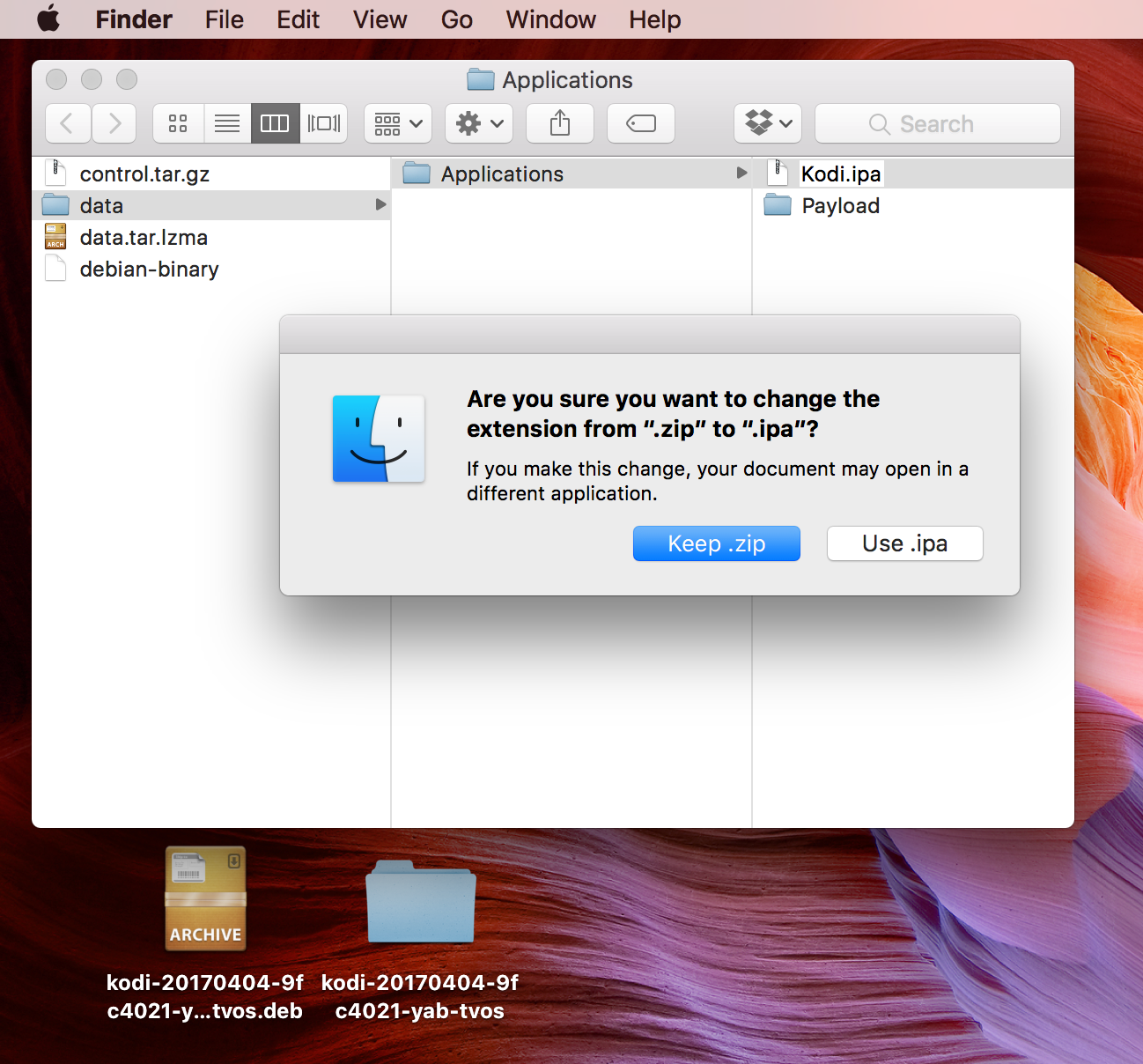 10) Now open up Cydia Impactor and use it to sideload your new version of Kodi to your Apple TV. If you don’t already know how to do this, follow Steps 1-6 of our guide to sideload an app to Apple TV. Replace any mentions of libertv.ipa in the linked guide with the Kodi.ipa that we want to install instead.

11) Keep the Kodi.ipa you’ve made somewhere safe! You can now use it as many times as you want without redoing this whole guide. In future, simply do Step 10 only to sideload the app you’ve made back onto your devices.

Once you’ve sideloaded the app, it will be valid on your Apple TV for 7 days if you have a free Apple account, and for a year if you have a paid Apple developer account. If a new version of Kodi is released and you want to update to it, download the updated build and follow this guide again to make a newer .ipa.

If you have any problems following the guide, let me know in the comments!