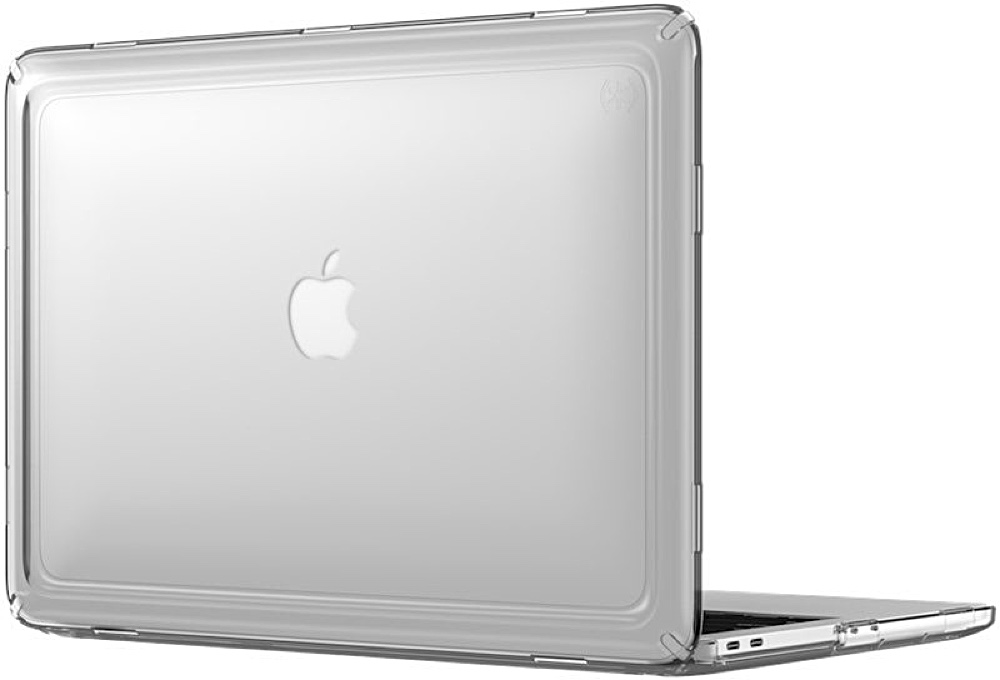 Apart from the colorful array of iPhone case offerings Speck is known for, they’re also fabled for their popular transparent MacBook Pro cases, which are built to prevent scuffing across your computer’s metallic surface while you travel with it.

Speck is now announcing a new breed of Presidio-based transparent cases for the all-new 2016 MacBook Pro at CES 2017, which for the first time, brings as much as four feet of drop protection to Apple’s premium notebook computers thanks to the company’s patented Impactium material.

Speck’s Presidio cases have been available for the iPhone for quite some time, and we went hands-on with the Grip series of the Presidio case lineup, but the transparent cases allow you to see through the case material to get a good view of the precision industrial engineering Apple is known for as it lurks inside the case.

Like all Speck MacBook Pro cases in the past, they will be of a two-piece snap-on design. One half covers the keyboard side of the notebook, while the other half covers the display side of the notebook. When closed, the case provides 360º protection of the computer, which keeps it safe in your bag, or if it accidentally gets knocked off your desk somehow… (rowdy kids?)

Presidio Clear for MacBook is made with Impactium Clear, a dynamic transparent material that absorbs and disperses shock upon impact and protects MacBooks from drops up to 4 feet. Impactium Clear is co-molded into a raised edge around the perimeter of the case that also provides a secure, no-slip grip, so you’re less likely to drop your device. The case’s dual-layer, two-piece design easily clips onto the MacBook.

Speck’s Presidio case for the 2016 MacBook Pro will come in both clear and onyx color options, with the latter being a darker ‘smoked’ option for those who aren’t much for the clear alternative. It will be available for the 13-inch variant of the computer beginning in February of this year for $99, and options for all other models of MacBook will be released throughout the calendar year for approximately the same or similar price.

Of course, it wouldn’t be a Speck case without the UV protection that it has built in, which resists the yellow colorization that can occur in similar cases due to aging and Sun exposure, so that’s a plus too.

In addition to the new cases for Apple’s 2016 MacBook Pro, Speck says updated Presidio Show cases are coming to the iPhone case lineup as well.

The black version of the Presidio Show is already available on Speck’s website and looks great with the Jet Black iPhone 7 or iPhone 7 Plus, but additional color options are coming in the future that compliment Apple’s other smartphone colors, including: Gold, Rose Gold, and Silver.

Thanks to the Impactium material, these cases are good for drops of up to 10 feet, all while giving you a clear window into the precision device being cradled within. Their UV protection, which is built into the transparent material, also helps them to resist yellowing over time.

Presidio Show was thoughtfully designed with the new iPhone 7 & 7 Plus in mind. The case features Speck’s Impactium Shock Barrier around the perimeter that provides 10-foot drop protection while the completely clear back shows off the phone’s design. Presidio Show comes in black, and will soon be available in gold, rose gold and silver, to perfectly match the different colors of the iPhone 7 & 7 Plus.

The iPhone 7 version of the case will set you back $40, but the bigger brother version for the iPhone 7 Plus will cost you $45.

Will you be picking up any of Speck’s new MacBook Pro or iPhone accessories this year? Share below!