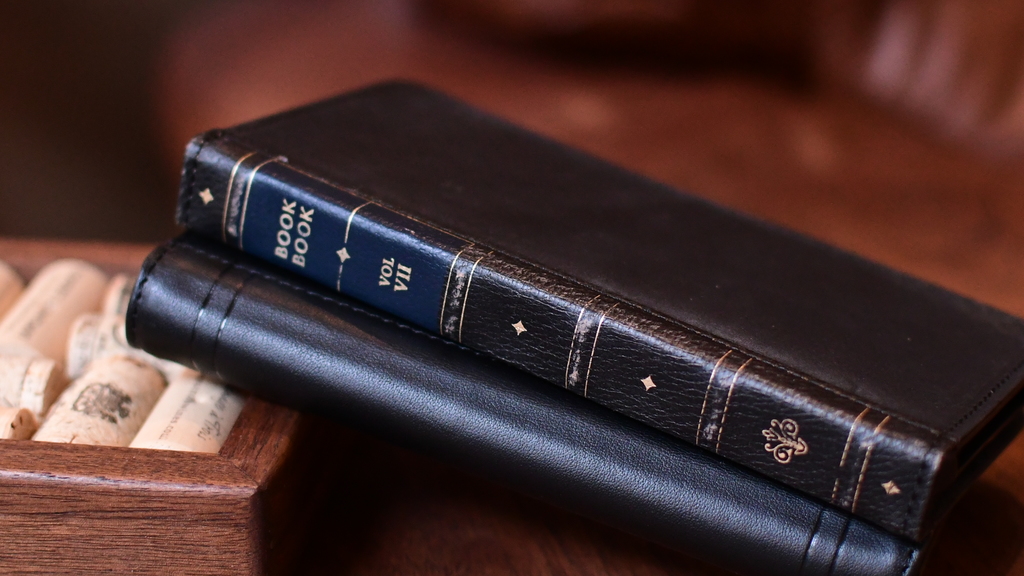 Just a couple of weeks ago, Twelve South announced the launch of two new cases for Apple’s latest handsets, the iPhone 7 and 7 Plus. One is an updated model of the popular BookBook case, which Twelve South is well-known for, while the other is a completely new case known as the Journal.

Both cases are crafted out of high-quality leather and include built-in wallets that let you store a number of credit cards, IDs, and cash. We’ll give you a hands-on look at both of them in this review.

Twelve South’s BookBook for iPhone 7 Plus

First we’ll take a look at the BookBook for the iPhone 7, a case Twelve South has been making for years. They’ve been updating it for the new iPhone on just about a bi-annual basis to account for ‘S’ models, which rarely have any cosmetic changes. 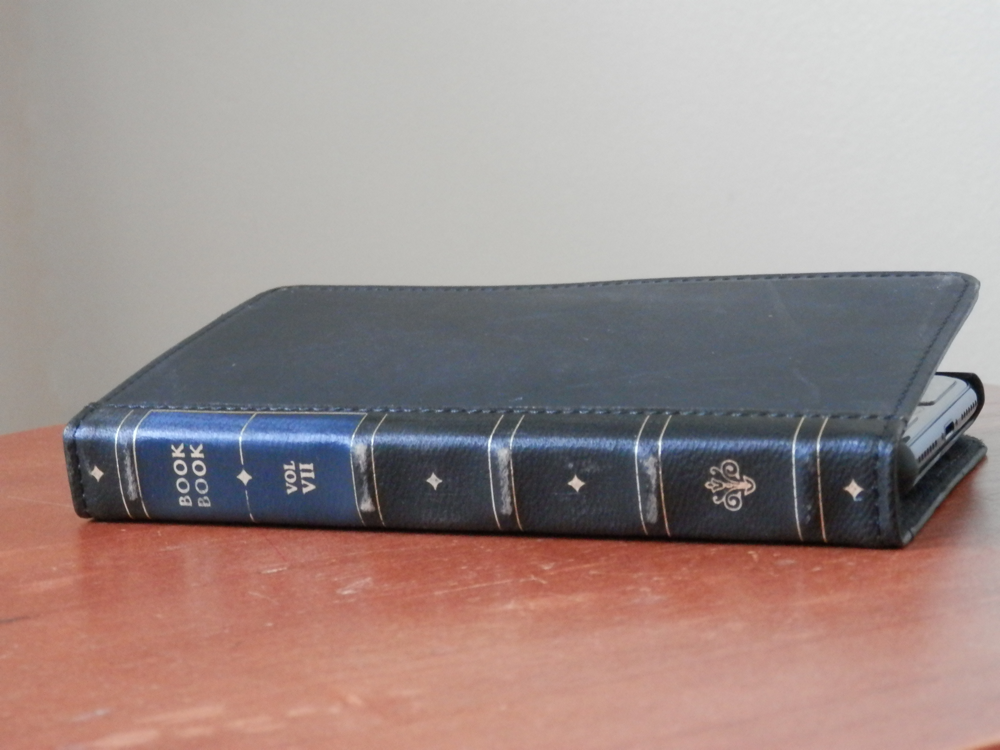 Right off the bat, you see that aged library book appearance the BookBook is famous for. The book spine has been given an updated look, helping it to stand out from any other BookBook cases you might have for your previous-generation iPhones.

When you open it up, you have access to 5 card slots; one has a clear window, which is perfect for a driver license or ID. The iPhone 7 model of the BookBook has 4 card slots instead, due to the smaller size. Behind everything, you’ll see a pocket, which allows you store cash. 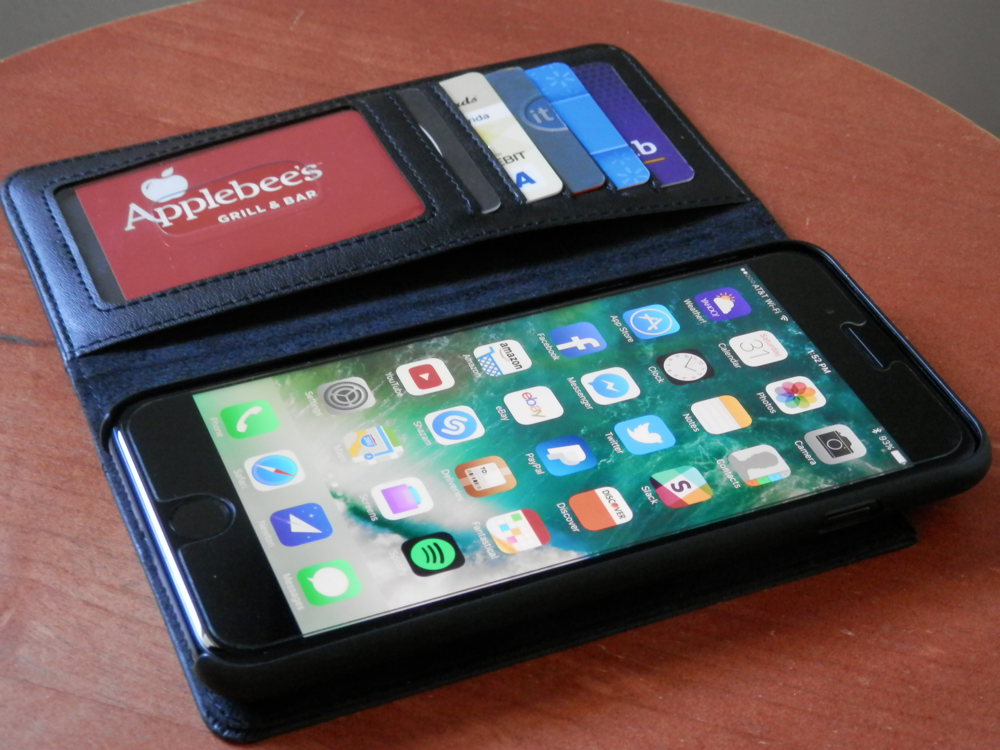 As far as fitment goes, the iPhone snaps right into the hard shell case and fits snugly. The hard shell case can even be removed from the wallet portion for whenever you don’t need to carry your wallet contents on your person. 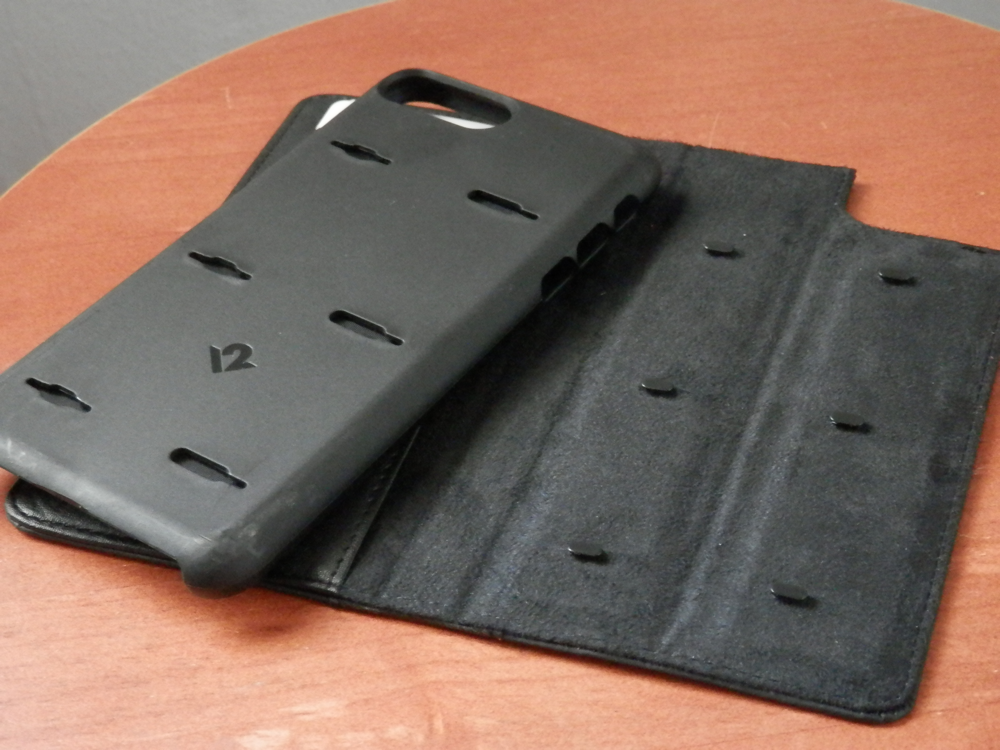 You’ll notice the slots on the back of the hard shell case, which act as anchors. You can attach just one side of the anchors to the wallet half to transform the BookBook into an iPhone stand, which is a useful feature for those who enjoy watching videos or taking FaceTime calls on their devices.

The inside of the hard shell case is very soft, so even if you have the Jet Black iPhone, you can rest assured that the finish is well protected inside this soft cradle and won’t get scratched up. 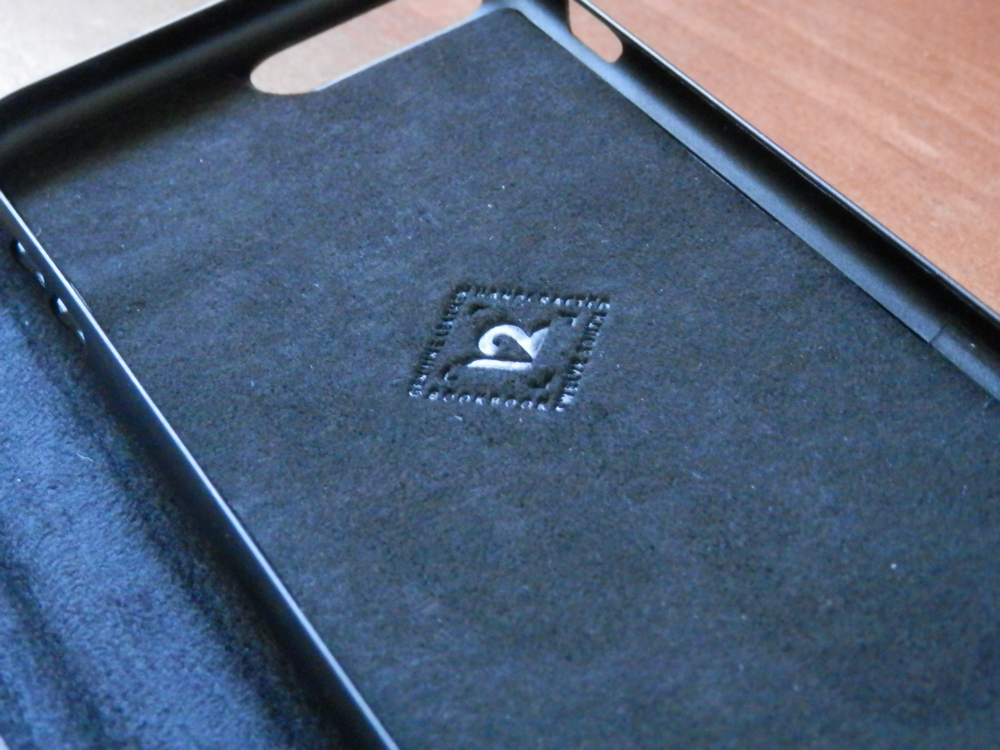 In terms of accessibility, the hard shell case provides excellent access to the power and volume buttons, as well as the ringer/silent switch. Decent sized cut-outs let you press buttons and flip switches with your fingertips whether you have nails or not. 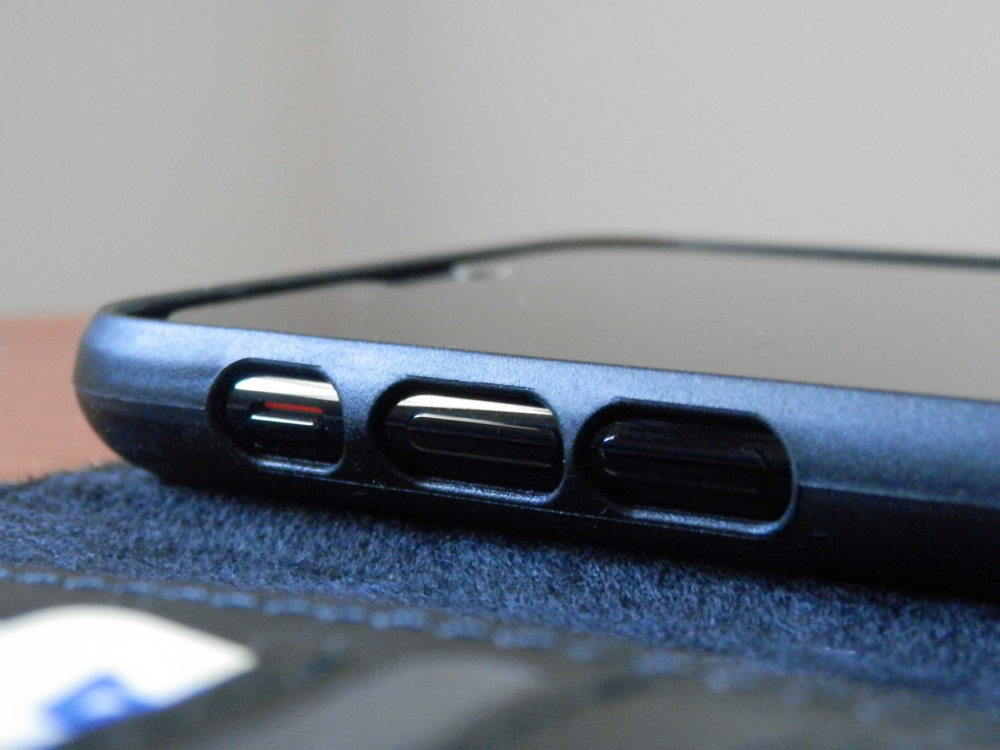 Photographers and videographers will also have no trouble using the camera, as a nice large cutout promises to leave the camera unobstructed. 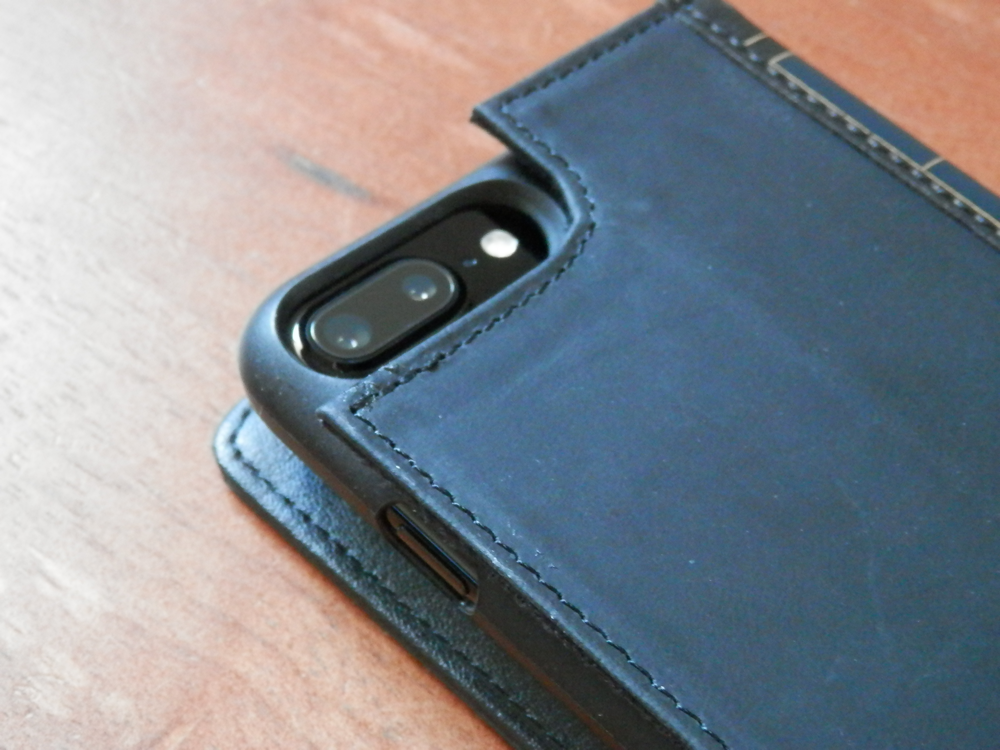 If you happen to be using an iPhone dock such as the HiRise 2, you can remove the hard shell case from the BookBook and use it with the dock easily thanks to the large cut-out for the Lightning port. 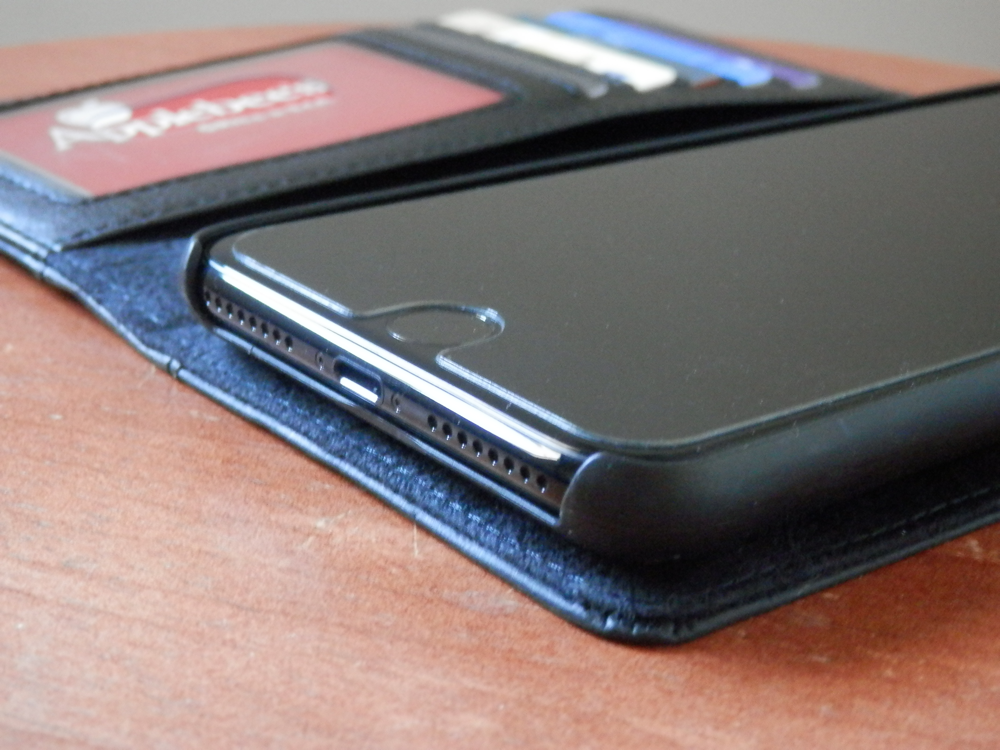 Scuffs and wrinkles? Great. Scratches and stains on your Book Book? Congrats! In fact, we actually like BookBook the older and more weathered it looks. Our advice on cleaning your BookBook for iPhone? Don’t!

This model will be no different, and built tougher than ever before, you can expect an even longer service life than previous models.

The BookBook is available on Amazon for $59.99 for each the iPhone 7 and iPhone 7 Plus, and is available in both black and brown color options. You can grab one for yourself by using the following links:

Twelve South’s Journal for iPhone 7 Plus

The Journal is a completely new case offering for the iPhone from Twelve South. It too is a leather wallet case for the iPhone, but rather than looking like a book, it’s a bit plainer and may fit alternative tastes. 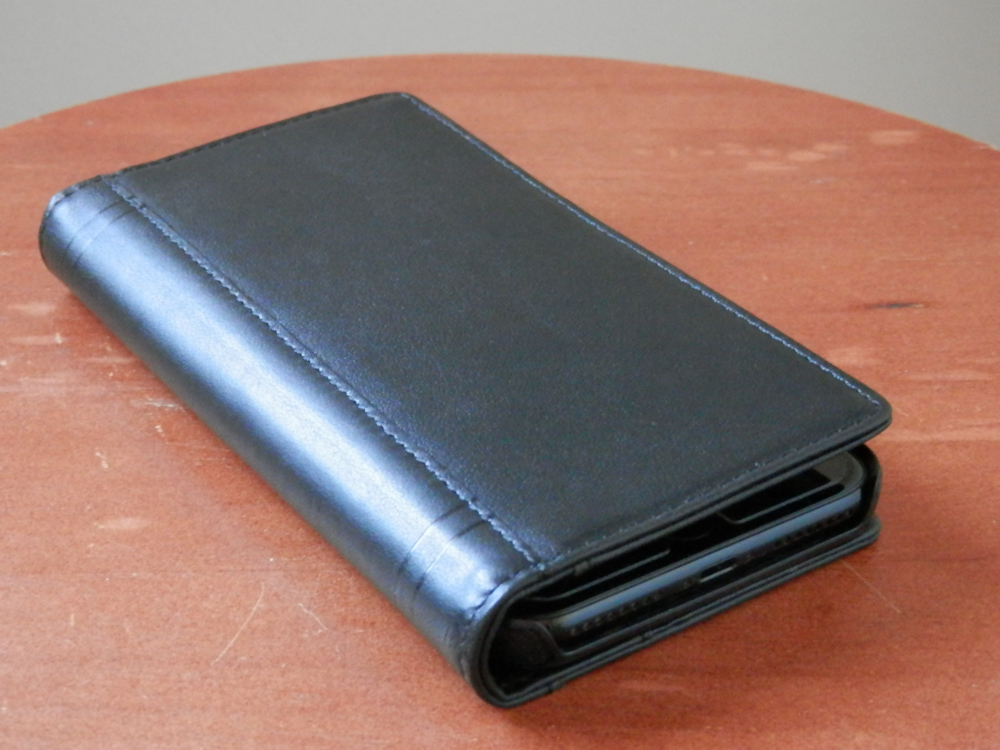 Journal holds one fewer credit card than the BookBook does, so the iPhone 7 case holds 3 cards and the iPhone 7 Plus case holds 4 cards, each with a single transparent ID slot. The Journal also has a cash pocket behind it all, just like the BookBook. 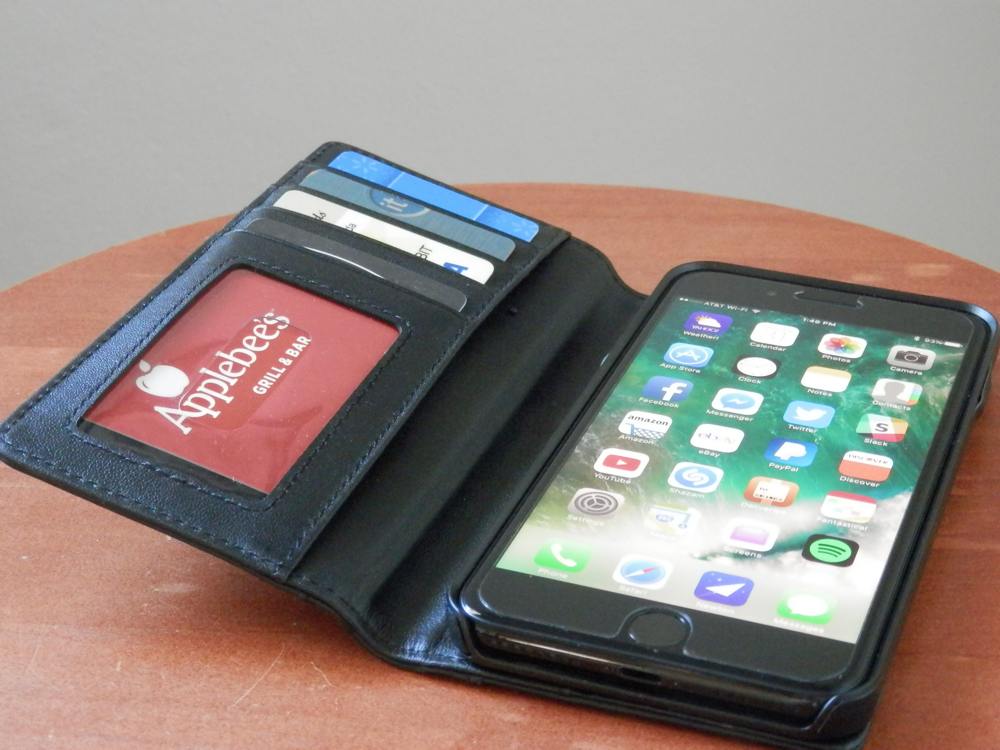 The exterior of the Journal features high-quality stitched leather, which offers good padding for your iPhone. The Twelve South logo is proudly embossed on the rear surface. 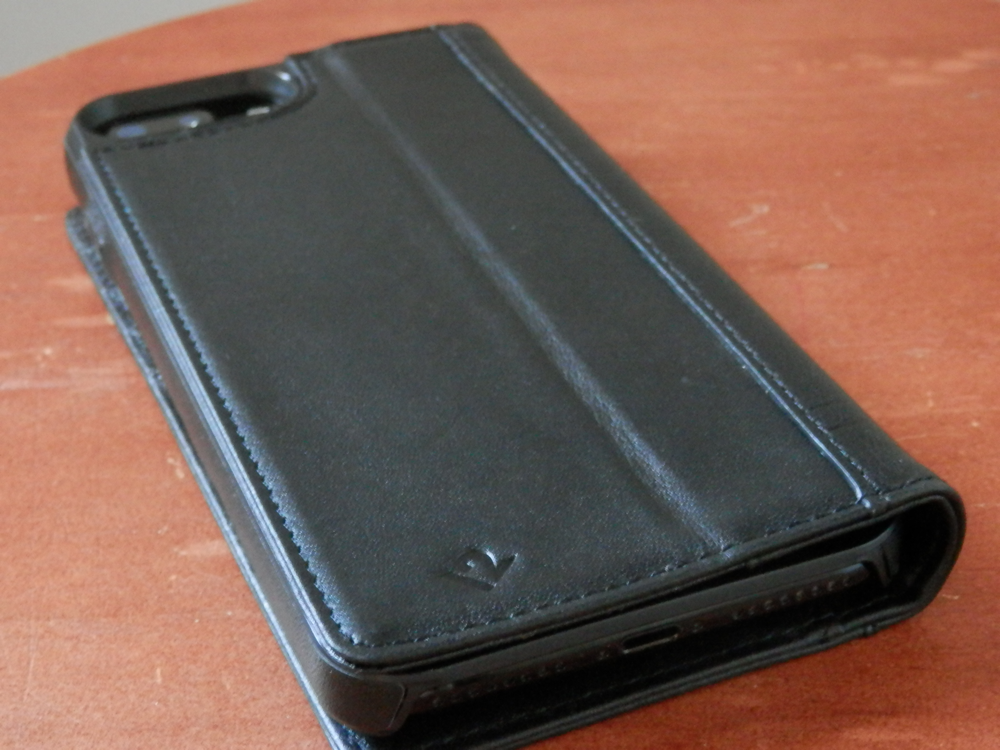 If photography is important to you, then you’ll also be happy to know that the camera cut-out is perfectly sized for the handsets’ larger cameras too. 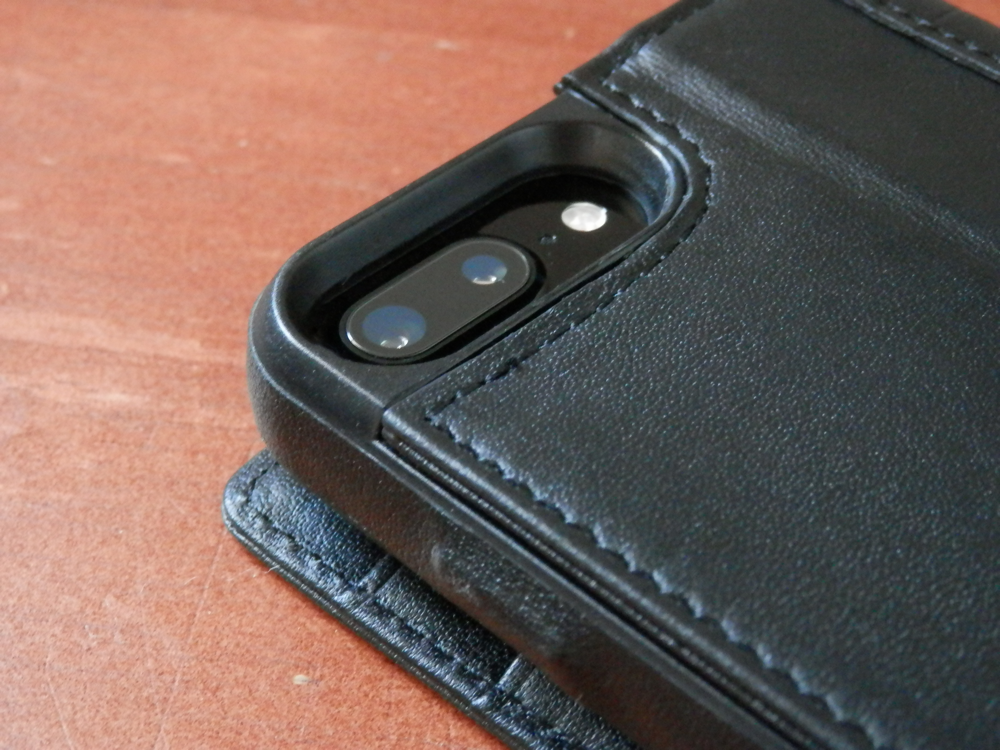 Unlike the BookBook, the case half of the Journal can’t be removed from the wallet half, which means you are stuck lugging around everything at once all the time, on the other hand, this also means that the case half is built with a higher-quality material, rather than out of plastic.

Just like the BookBook, you can sit the Journal in such a way that it stands up at a 45-degree angle to watch videos or take FaceTime calls, which is useful for a handful of people.

The interior of the snap-on case comes with the same soft feel that the BookBook has in order to cradle your device, so once again you won’t have to worry about ghost scuffs appearing for no reason. 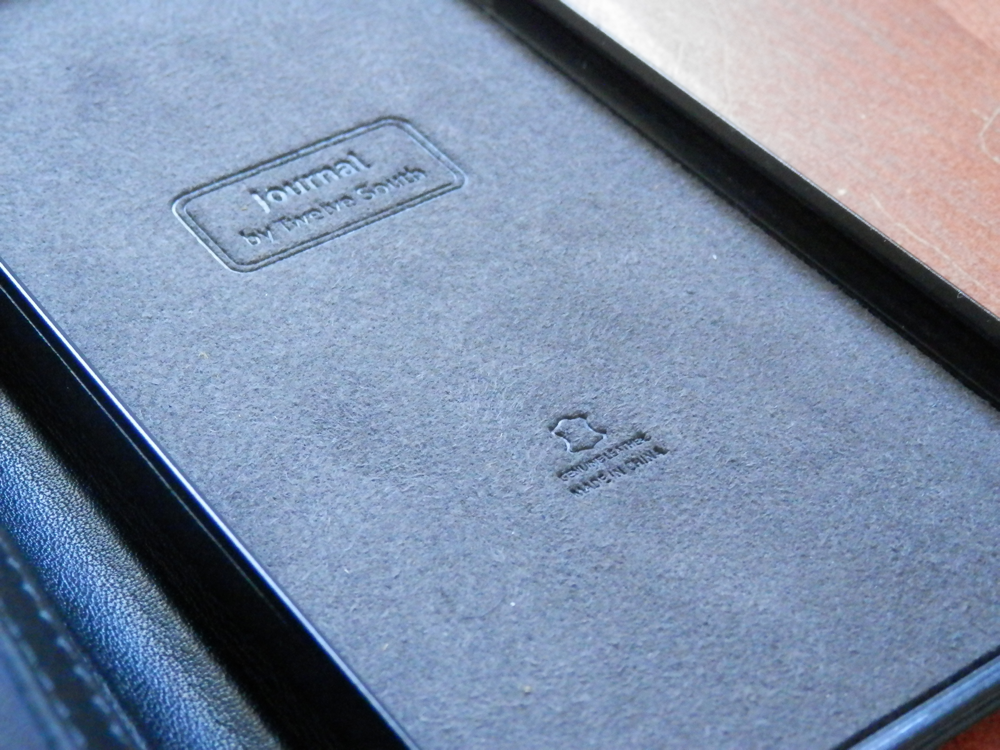 The exterior of the snap-on case features protection for the buttons, which are all covered by leather, which softens as it ages through use, while a cut-out for the ringer/silent switch is just big enough to stick a finger through. 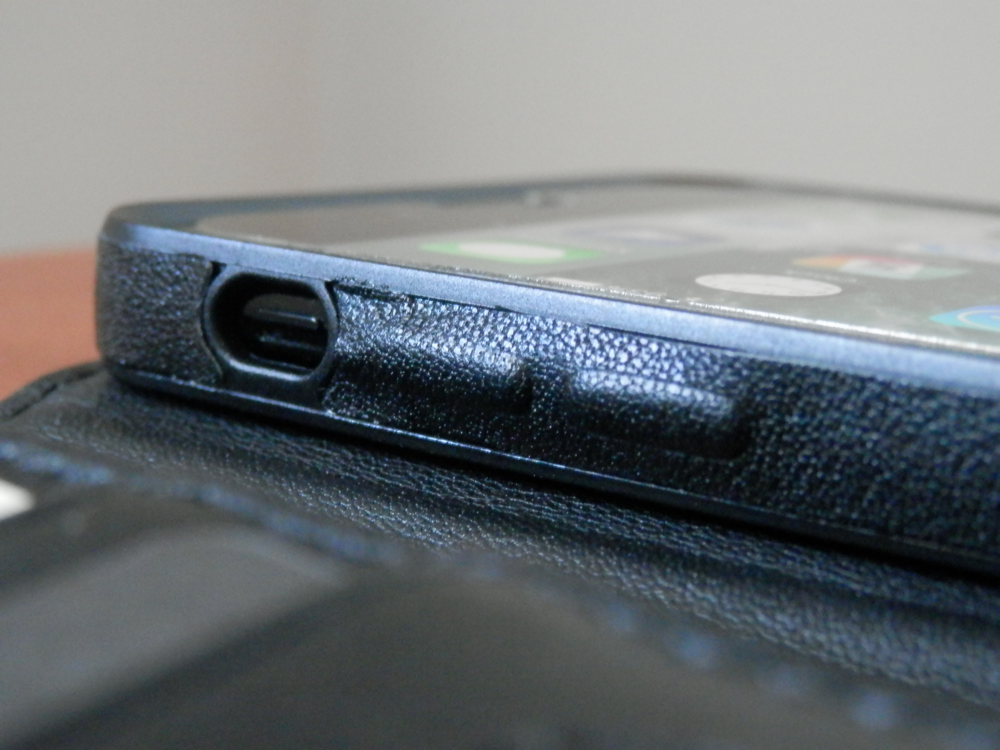 The bottom of the Journal has a large enough opening to charge with any of your Lightning accessories, however because of the design of the case, we don’t really recommend using it with a dock because it will admittedly feel awkward. 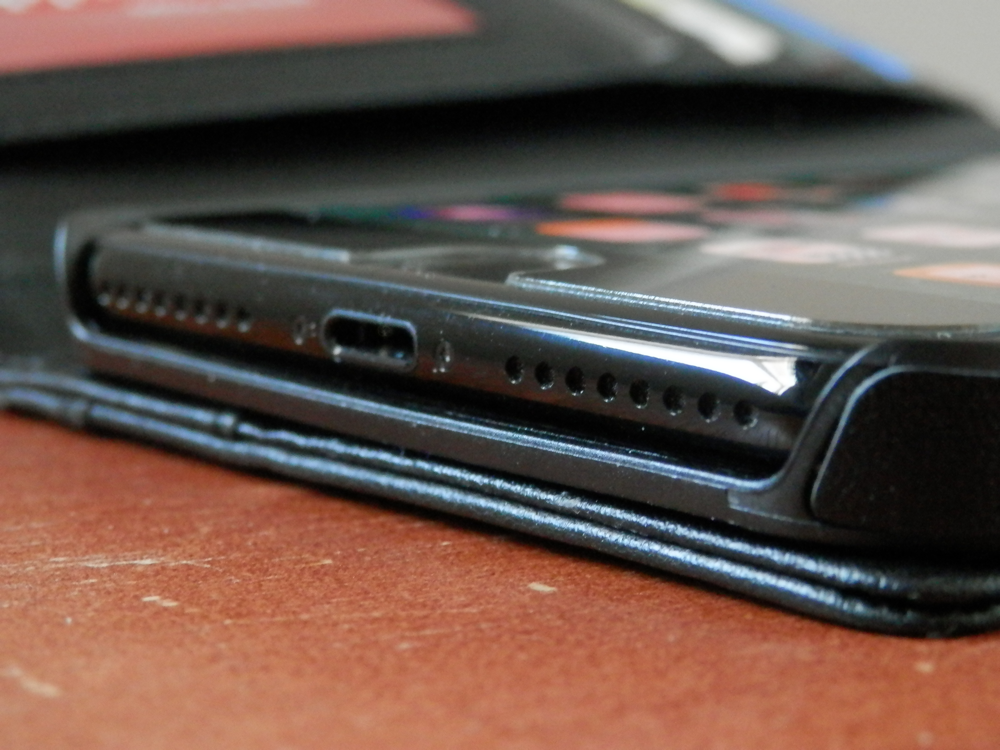 Unlike the BookBook, the Journal is exclusively made for the iPhone 7 and iPhone 7 Plus, but it will also fit iPhone 6 and 6s as well as their larger 5.5-inch counterparts. It can be had from Twelve South’s website for $69.99.

Which one is better?

Both cases are designed to be classy, but each case has different features setting it apart from the other. That said, it’s hard to say which one is better without knowing how you will use it, and everyone is different.

BookBook is great for someone who wants the utilitarian qualities of a wallet case in addition to the freedom of detaching the thinner hard-shell case when the wallet isn’t needed, such as when you’re just around the house. It also makes a great decoration around the house and camouflages well in a book case.

Journal, on the other hand, makes a good travel case, because it keeps everything together and there’s no chance the iPhone will detach from your wallet case. This means your phone and payment methods are securely tied together on your person, and even if a place doesn’t take Apple Pay, you’ve got your credit cards and cash as backups.

Because both are wallet cases, your iPhone and credit cards/IDs are all in one place either way you go. You need to be mindful of where you keep it at all times, otherwise you open yourself up to theft. On the other hand, those who care about their belongings won’t let their iPhone out of their sight, and doing so deters theft, so keep that in mind.

If you’re worried about losing everything, then a case like these probably isn’t for you, but tons of people love their wallet cases, and Twelve South is pretty much the top of the line when it comes to them.

Also read: Some great wallet cases for the iPhone 7 and iPhone 7 Plus