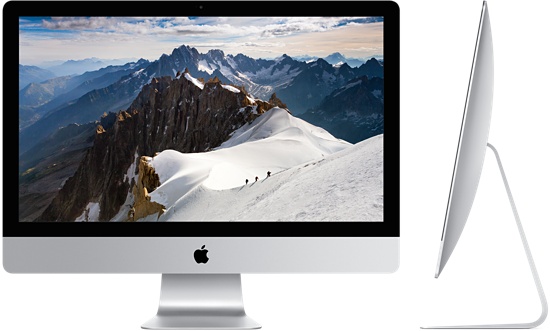 As first reviews of the new MacBook Pro hit the web this morning, Apple’s marketing boss Phil Schiller took to Backchannel to dispel some of the myths saying his company has been stubbornly dismissive of the idea of a touchscreen Mac for no apparent reason. Schiller reveals that Apple has actually spent years testing if touchscreens made sense on the Mac before realizing that touching things on a 27-inch screen quickly becomes “absurd”.

The Apple Watch, iPhone, iPad, MacBook and iMac are all distinctively designed computers, each one serving a specific purpose and providing a user experience optimized just for it. Apple came to this conclusion after years of testing if touchscreens might make sense on the Mac.

“Our instincts were that it didn’t, but, what the heck, we could be wrong—so our teams worked on that for a number of times over the years,” said Schiller. “We’ve absolutely come away with the belief that it isn’t the right thing to do. Our instincts were correct.”

From a technology standpoint, there’s absolutely nothing preventing Apple from adding a touchscreen to the Mac. But as soon as you begin to exercise the idea of a touchscreen Mac, you quickly realize that computers rely on mouse pointers and user interface elements that are designed with the precision of individual pixels in mind.

“If we were to do Multi-Touch on the screen of the notebook, that wouldn’t be enough” because simply adding a touchscreen and code to translate touches into mouse events would violate the very basic functionality that is intrinsic to the form of a notebook or desktop computer in the first place.

On mobile devices, however, touch targets are much larger. Applications are optimized for touch-based interactions and the operating system and the user interface are designed around the lack of menu bars you normally see in everyday Mac apps.

“Can you imagine a 27-inch iMac where you have to reach over the air to try to touch and do things?”, asked Schiller. “That becomes absurd.”

Fair enough. But then again, why not optimize and redesign macOS and the menu bars for finger-based input? That way, you could satisfy those who have been holding their fingers crossed for a touchscreen Mac, no?

As per Schiller, doing so would ruin the experience for people using the trackpad/mouse. “You can’t optimize for both,” he says. “It’s the lowest common denominator thinking.”

As for the new MacBook Pro with Touch Bar, Schiller said that having an interactive place where your hands are down on the keyboard is “celebrating what makes a notebook a great notebook.”

“This notebook design has been with us for 25 years and that fills a need for many people,” said Schiller, who is Vice President of Worldwide Marketing at Apple.

Okay, but what does Schiller make of the criticism leveled at the MacBook Pro’s adoption of USB-C/Thunderbolt 3 technology without providing a single USB-A port? In his mind, it’s a non-issue because most people won’t be needing dongles anyways.

“We’re absolutely more sure than ever that we’ve done the right thing.”

Still, Apple cut dongle prices on its web store—likely in an admission that some users out there are being sensitive to this issue. Addressing the pushback regarding the new MacBook Pro and responding to criticism that Apple has lost its innovative edge, the executive said this:

We work hard on these things and they are the best. We care about the feedback but we know that the fundamental difference on where their opinions are coming is between those who had a chance to use it and those who haven’t.

There are people who want us to innovate faster and when we do there’s people who say, ‘Whoa, whoa, you’re going too fast.’ That’s just a balance in the world.

There’s always something for a critic to beat up on anybody’s notebook, because you have to make choices. I know our team made very smart choices and this is the best notebook that can be made with the greatest technology.

Schiller underscored that Apple is building this new notebook for the future and added that in five years the nascent USB-C technology will be in its prime.