Apple on Tuesday posted its [fiscal] fourth quarter earnings for 2016, offering a look at its performance over the past 3 months. The Cupertino company came close to most of Wall Street’s expectations, selling 45.5 million iPhones, 9.3 million iPads and earning $46.9 billion in revenue. The numbers are still down year-over-year, however, as the struggle to find new growth continues.

Here are the comments from CEO Tim Cook and CFO Luca Maestri:

“Our strong September quarter results cap a very successful fiscal 2016 for Apple,” said Tim Cook, Apple’s CEO. “We’re thrilled with the customer response to iPhone 7, iPhone 7 Plus and Apple Watch Series 2, as well as the incredible momentum of our Services business, where revenue grew 24 percent to set another all-time record.”

“We are pleased to have generated $16.1 billion in operating cash flow, a new record for the September quarter,” said Luca Maestri, Apple’s CFO. “We also returned $9.3 billion to investors through dividends and share repurchases during the quarter and have now completed over $186 billion of our capital return program.”

And here is a look at all of the unaudited summary data: 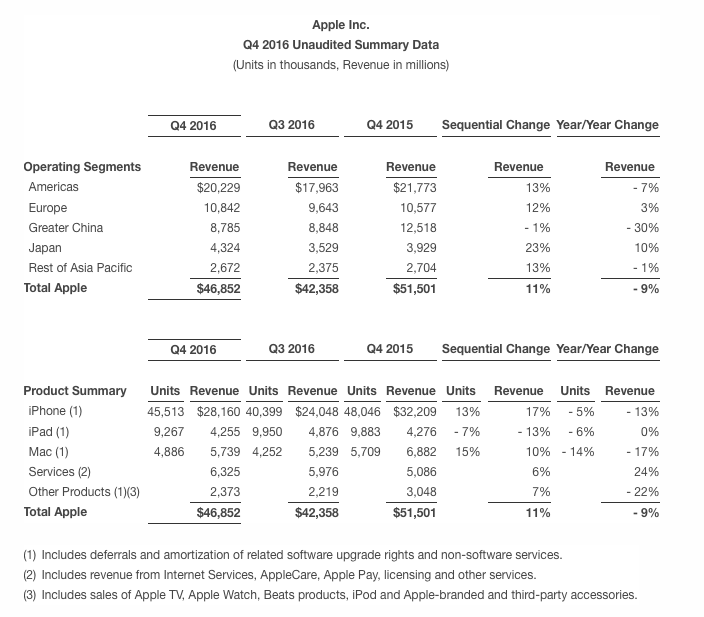 It’s not surprising that Mac sales are down quite about year-over-year, given that Apple has offered few hardware updates since then and is widely expected to unveil new laptops this week. And its forecasts for the upcoming holiday quarter are better than Wall Street’s estimates, on the back of strong iPhone 7 demand. AAPL is currently down 2.4% in after-hours trading.