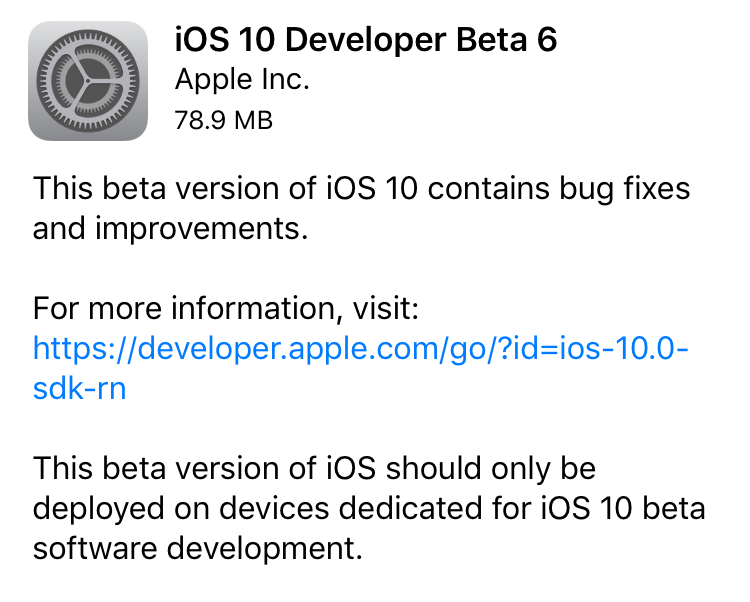 Apple has seeded the sixth beta of iOS 10, watchOS 3, macOS Sierra, and tvOS 10 to developers today. These new beta software versions come a week after the previous versions. Touting the usual bug fixes and improvements, these betas aren’t likely coming with new features, but rather with small adjustments to both the UI and existing features.

Additionally, Apple has also made available the fifth beta of iOS 10 to testers who have registered to be part of the Public beta program offered by Apple to non-developers.

iOS 10 includes new features like a completely redesigned Music application, extensions for the Messages app, a brand new Home application to control HomeKit-enabled devices, and more. Here are some of the updates that could be found in the previous beta release of iOS 10.

tvOS 10 comes with more subtle yet useful additions, such as single sign-on, a feature that will let users sign on once via their cable provider to automatically login to all supported TV apps on Apple TV.

watchOS 3 has also seen its fair share of new features. Maybe most notably, the Friends feature is now gone and replaced by a more useful Dock which can contain up to 10 applications that are refreshed in the background to offer an almost instant launch time. For reference, here is what was new in watchOS 3 beta 5:

Although there is no official release date for these new software versions, iOS 10, watchOS 3, and tvOS 10 are expected to launch in September, likely a couple days before the launch of the new iPhone, if history is any indication of the future.

We will be back later with a detailed post highlighting the new features in iOS 10 beta 6. In the meantime, feel free to let us know if you find anything newsworthy in any of these releases.