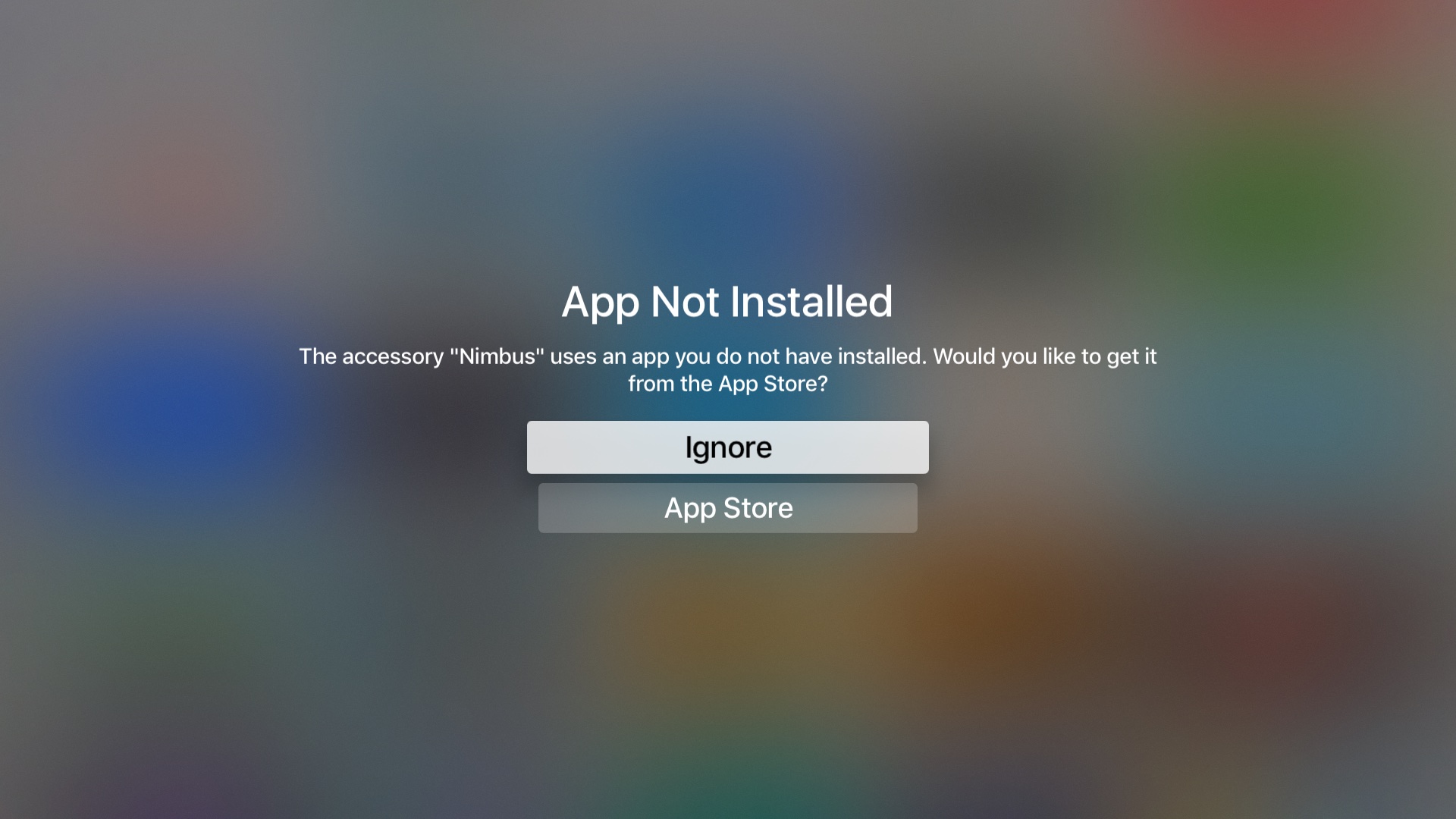 In addition to helping you manage your HomeKit accessories remotely through the fourth-generation Apple TV, tvOS 10 beta also packs in expanded support for a wider variety of Bluetooth accessories. It’s interesting that after connecting an accessory to the Apple TV, tvOS 10 puts up a prompt offering a user to download a companion App Store app.

The same hardware accessories download prompt first appeared on the iPhone, iPad and iPod touch following the iOS 3 software update back in September 2009, but this is the first time we’ve seen it implemented on tvOS.

After downloading and successfully installing tvOS 10 beta on my Apple TV, I went about testing my favorite apps and games to see if they would work without issues on the new OS. At one point, I fired up a game and turned on my MFi-certified SteelSeries Nimbus Wireless controller (which we reviewed here).

A second or so later, up popped a prompt, labeled App Not Installed and saying that the controller uses an app which I don’t have installed. I could click the Ignore button to dismiss the alert or try getting the app by clicking the App Store button.

I went ahead and selected App Store, which loaded the front page on the tvOS App Store. The Nimbus app, however, didn’t download simply because it does not exist yet for the Apple TV.

I know that the official SteelSeries Nimbus Companion App for the iPhone and iPad exists on the iOS App Store, but I don’t think is related in any way to the prompt I saw on my Apple TV. I’m also positive that I never saw this prompt on prior tvOS versions and neither has my colleague Andrew, who happens to own a Bluetooth controller as well.

Apple’s own release notes frame this prompt as a known issue in tvOS 10 beta.

“When connecting a game controller, you may see an ‘App Not Installed’ dialog appear,” Apple writes, advising beta testers to select Ignore to dismiss the dialog. But the very fact that tvOS shows the prompt suggests that the operating system, when it ships this fall, could make it easier for users to download official apps for Bluetooth-based accessories for the Apple TV.

On iOS, users are prompted to download a piece of software for their accessory if a companion App Store app is required for the device to function and the accessory has been MFi-certified. It would make sense for these existing rules to extend to tvOS and Bluetooth accessories for the Apple TV.

At any rate, it’s still unclear what new accessories tvOS will support going forward. By comparison, tvOS 9 has limited support for Bluetooth-based keyboards, game controllers and audio devices like speakers and headphones.