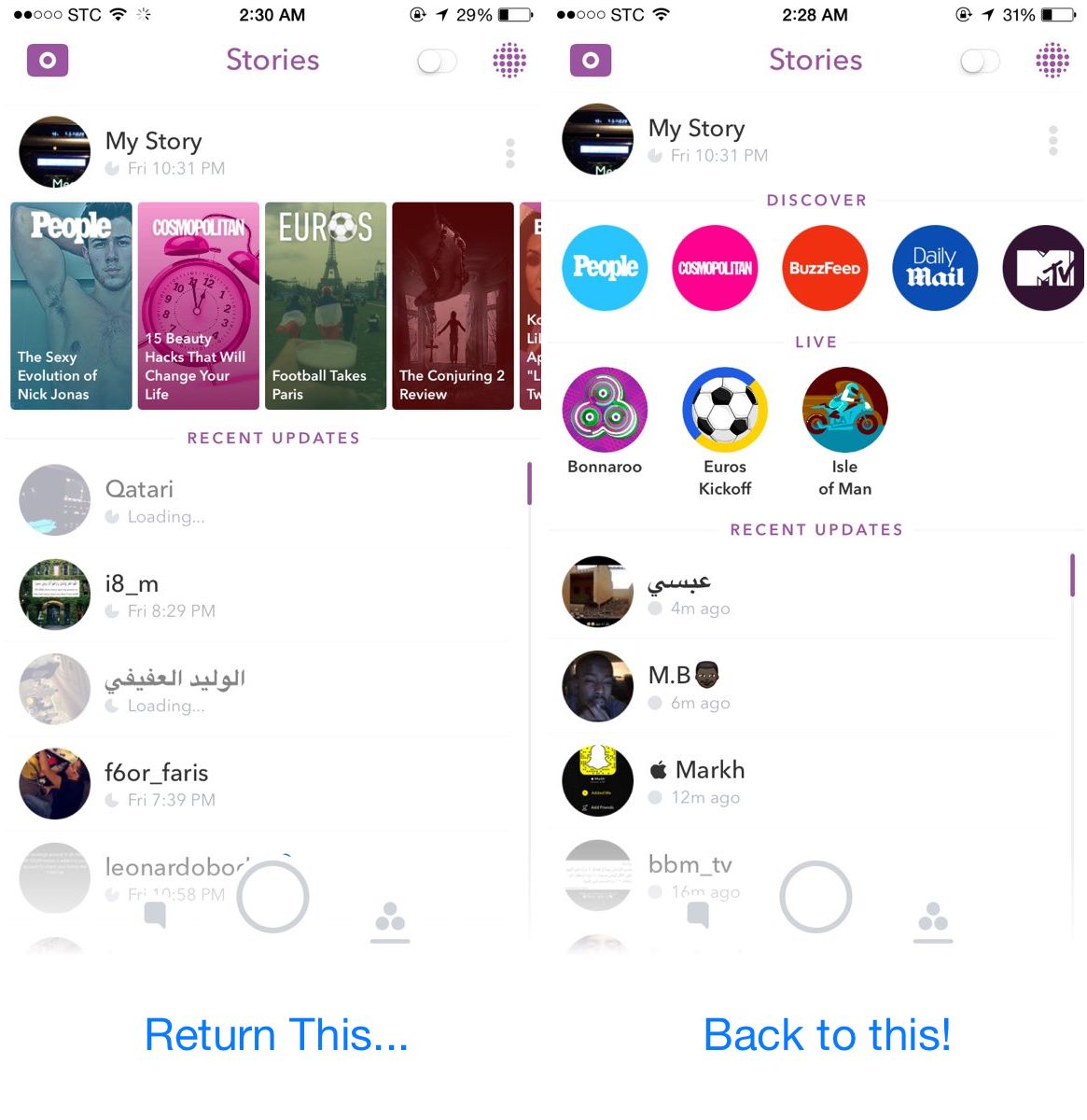 Not long ago, Snapchat released an app update for iOS that changed the way users interact with the Stories section of their app.

Not all users were happy with the changes, and so, an iOS developer in the jailbreak community made a new tweak called SnapOldStory that lets you revert back to the old Stories page style.

Going back to the good old days

For whatever reason, Snapchat decided that they were going to take something good from their free iOS app and change it up to something simpler in the latest app update (version number 9.32.2.0), which ironically doesn’t seem to make things any easier for the user.

Despite the fact that the Stories interface looks cleaner after the update, users now don’t get the separated Live and Discover sections because Snapchat has merged them together.

As the developer explained to me in a personal interview, most people don’t seem to prefer the updated Stories interface, and so he wanted to create a way for users to choose whether they had the updated interface or the older one in the app.

SnapOldStory gets rid of all the recent changes Snapchat made to their app and reverts everything in the Stories interface back to how it was prior to the recent app update. This way, those with nostalgia for the older Snapchat Stories interface can be have it back without much fuss; all you’re going to need is a jailbreak, so hopefully you still have one.

SnapOldStory is intended for those who don’t like the new changes to the Snapchat app, and after trying it, I would say it does a very good job of restoring old features to the latest version of the iOS app.

Personally, I really like tweaks like these, because these are the tweaks that give users more power over their devices and allow users to stick it to the companies who like to change things up when we really don’t want them to.

I’m not a heavy Snapchat user, but it doesn’t take a rocket scientist to see the changes that have been made in the update, and despite not using the app that often, I believe I’m going to have to side with the developer on this one. I think the older interface looked a lot nicer and provided the app user with more information at a glance.

The tweak is a free download from Cydia’s BigBoss repository, so you’re not going to lose anything from trying it out. If you use Snapchat a lot, and you miss the old look and feel of the app’s Stories page, then this is something you should consider downloading.

The tweak works with the current version of Snapchat for iOS (9.32.2.0), but it’s always possible that Snapchat could block the tweak from working in a future update, so this is something to keep in mind. If you happen to like this tweak, you might want to avoid future Snapchat updates unless the developer deems them safe.

SnapOldStory doesn’t have any options to configure, but it does solve a problem that many Snapchat users wish to solve: keeping their app experience from being degraded by disappointing app updates.

If you’re not already a Snapchat user, and want to try it out first, you can download the app for free from the App Store.

What are your thoughts on the new Stories page? Do you prefer the older one more? Share in the comments below!