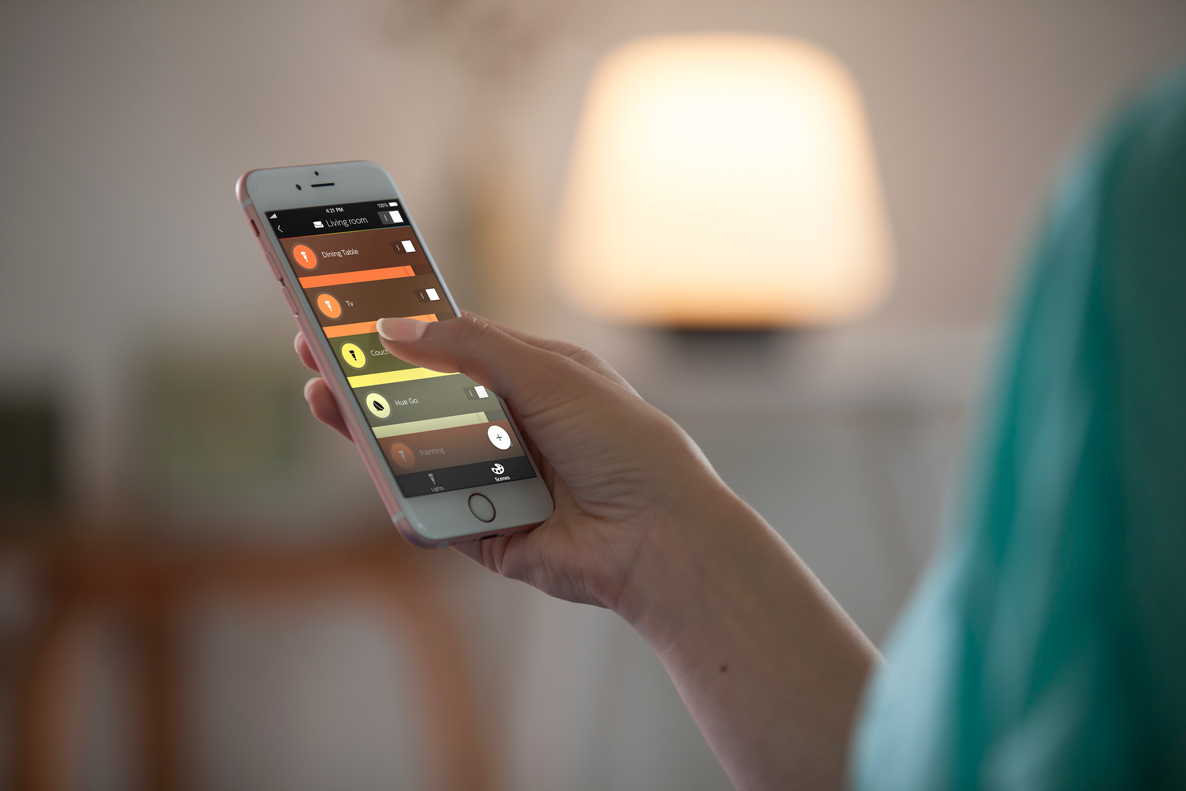 For decades it was a thing of science fiction. Books and movies have long depicted their protagonists speaking commands to inanimate objects and having orders carried out instantly. I think it’s safe to say that most everyone, including myself, used to daydream of being able to control lights simply by giving a voice command from anywhere in the room, no longer having to get up and walk over to flip a light switch on or off.

Then Philips introduced their Hue lightbulbs and companion API, moving traditional light switches a step closer to obsoleteness by introducing the ability to turn lights on and off with a smartphone app, bringing us one step closer to making voice controlled lights a reality. When the second generation Hue bridge was introduced with HomeKit support, Siri gained the ability to control Hue peripherals, creating the ultimate ease-of-use scenario.

There’s almost a magical property surrounding Philips Hue lights. A room can be lit or darkened by a spoken word, its walls repainted in an instant, or the atmosphere changed to anything from a tropical sunset to an Arctic aurora. There’s really no limit to what one can do with a few Hue lights and some creative inspiration.

The one drawback to Philips Hue since its launch, however, has been the mobile app. While it gets the job done on a basic level, it’s been an eyesore and simply painful to use, which is why many users have turned to third party options such as Huemote for managing their lights.

That all changes with the new Philips Hue app, a complete redesign that has kept me from even opening a third-party Hue app for the past few months. This has been a much-needed update for quite a while now, but even with its late arrival, the app is well worth considering for usage on a day-to-day basis.

The new Hue app introduces several new features, including the ability to assign lights to their respective rooms, an organizing of alarms and timers into routines, and new Siri commands for HomeKit-enabled bridges. Rooms and new Siri commands are what make having Hue across the house and sharing its functionality with family members so much better. Additionally, the interface throughout the app has been completely redone, and the new UI is most definitely an improvement. 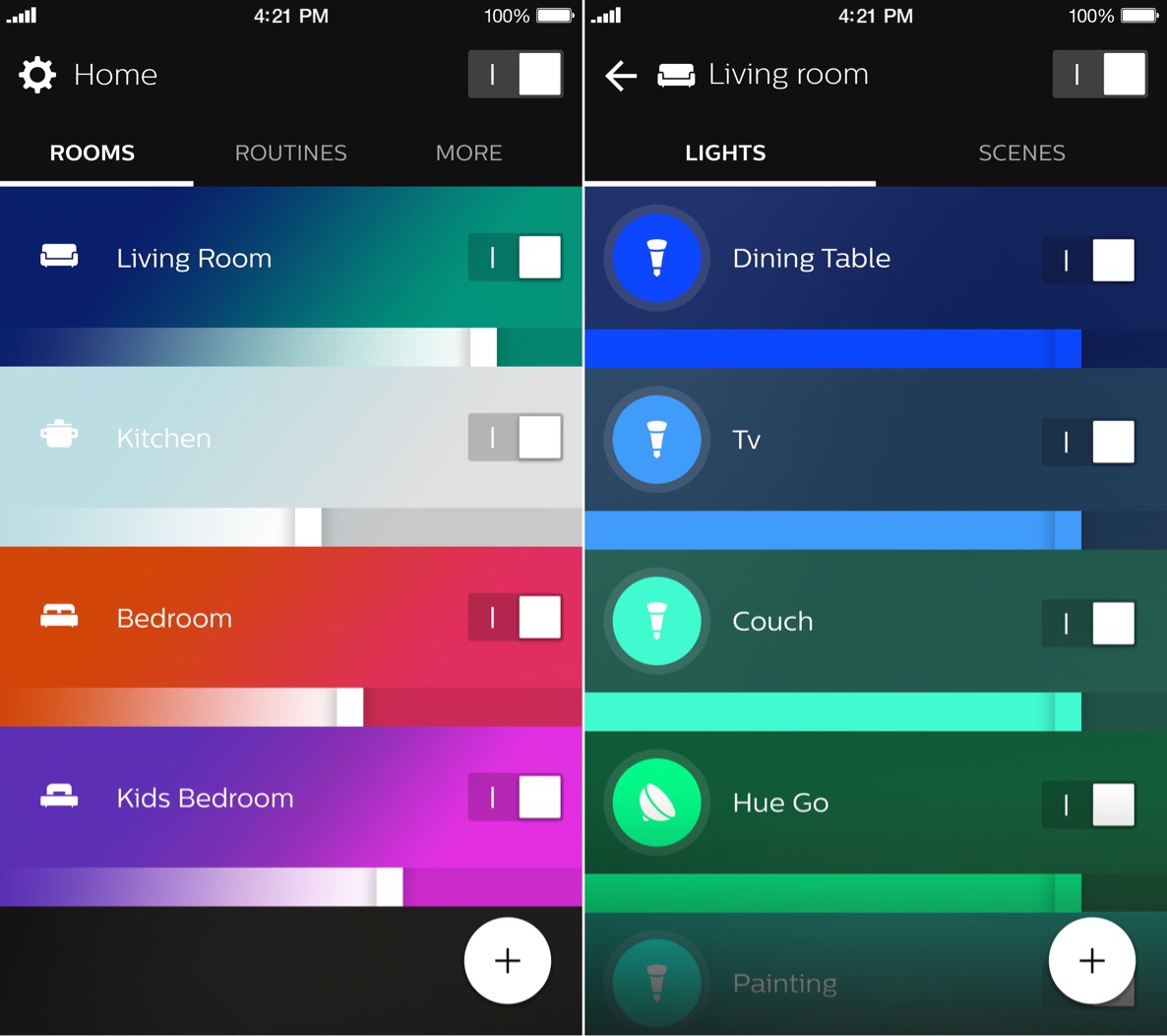 The first thing you’ll see after launching the app post-setup is no longer a Home screen-like collection of scenes that by default affect all your lights when activated. Instead, the Rooms screen lists all the rooms you’ve setup, with a brightness slider and an on/off toggle for each room, as well as a master switch at the top to toggle all lights connected to the Hue bridge.

When configuring rooms, users can select which lights belong to a room, and when turning a room on or off, changing its color, or setting a scene, only the lights in the room will be affected. This makes a world of difference when managing lights across the house, particularly with multiple Hue users in a house, as each individual can control the lights in their respective room without accidentally disturbing someone else by activating a scene that changes all the lights in the house, for example.

Tapping on a room from the main screen brings up two tabs, the first of which being for controlling individual lights. Here are listed all the lights assigned to the selected room, each with its own on/off switch and brightness slider, and selecting any of these opens the Hue color pickers for choosing the exact color or shade of white you want. Also available under this screen are the four most-used recipes, which, when tapped, only apply to the selected light. Switching to the second tab displays all the scenes in the app, and choosing one of these applies it to all the bulbs in the room.

For my personal use, the ability to group lights into rooms makes managing the lights in my part of the house far easier than in the previous Hue app, and as more and more houses gain Hue lights and as more and more lights fill each house, this type of light management is absolutely vital. The addition of rooms not only allows but encourages multi-room and multi-person setups in homes, and that’s exactly what Philips wants, and needs, for Hue to thrive. 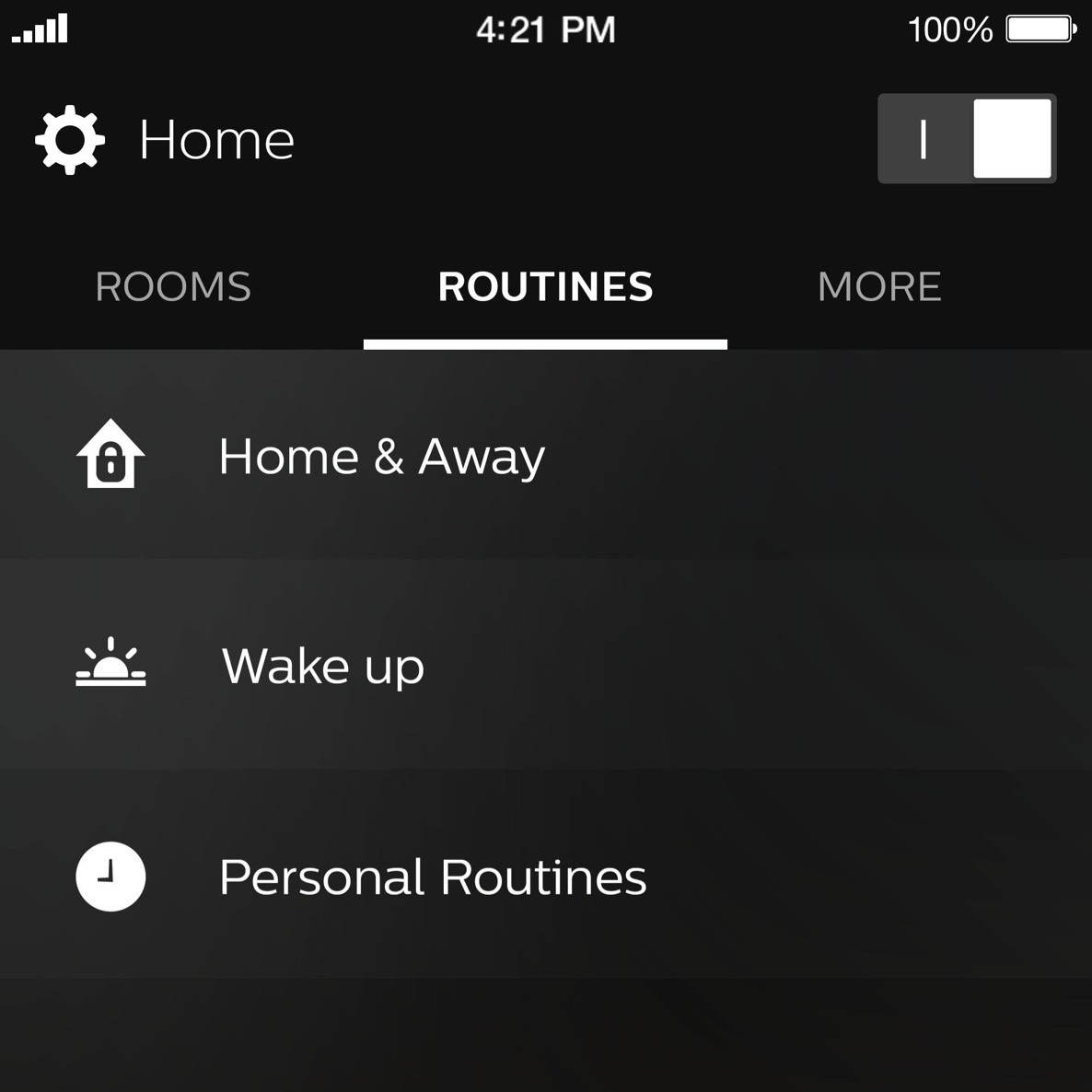 The previous of the Philips Hue mobile app had alarms and timers, which would activate a scene at a certain time or after a certain time. The redesign categorizes these as “routines”, which also includes the actions that’ll be carried out when you leave or arrive at the house.

By granting the app location permissions, it can turn off the lights in a certain room or all the lights in the house automatically when you leave the house – or turn on select lights to discourage burglars by giving the appearance that someone is home. Alternatively, it can also greet its owner by turning on the lights as he or she arrives home.

Wake up routines can also be set for using Philips Hue to slowly fade up the lights to simulate a sunrise each morning in order to provide a more gentle rousing than most alarms would give, and users can set multiple wakeup routines for certain days or groups of days of the week, meaning a different routine can be set for the weekend than work days. This is similar in concept to Sleep Cycle, an app that tracks your sleeping patterns through movement or sounds and wakes you up when you’re sleeping the lightest. The app can also tie into the Philips Hue API to use a “sunrise” to wake its users more gently.

Finally, users can configure additional routines which have verbatim functionality as wake up routines, but are placed under a different category, I assume for organization’s sake. These can be used to trigger a scene or to turn the lights off at any specified time of any day or days the users desires, such as an evening “lights out” or automatically changing the lights’ color when it’s time to leave in the morning.

It’s worth noting that timers are no longer present in the updated app, as their functionality is likely assumed to be covered by the alarm-style routines that are available in the app. Still, some users who found themselves setting timers often may be frustrated by this change, as it was more convenient to set the lights to turn off after 30 minutes than to calculate the time 30 minutes from when you’re setting the alarm. I personally never used timers, but this change could be an inconvenience for some. 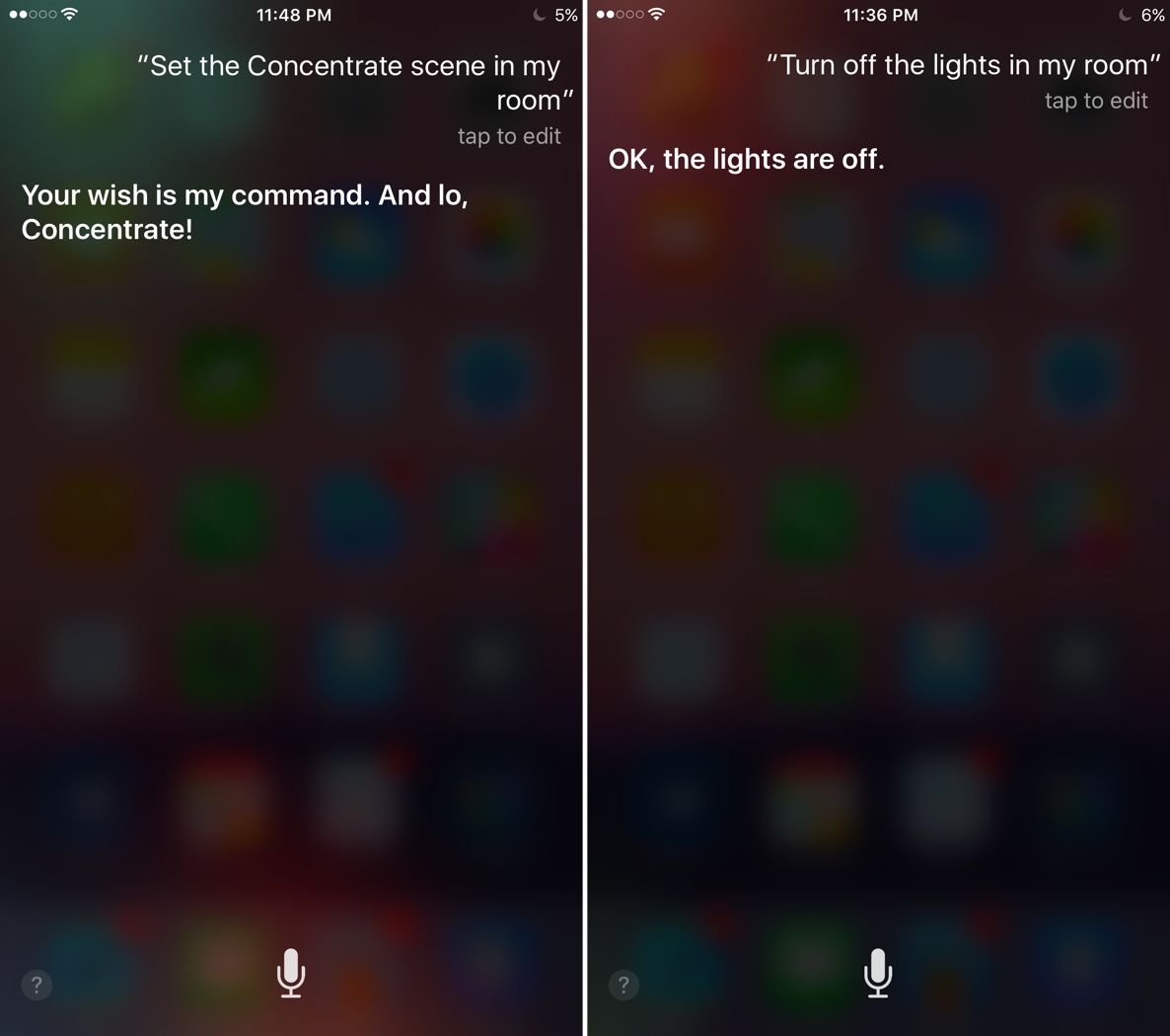 Because lights can now be divided into rooms, Siri can control the lights on a per-room basis when given commands such as “Turn off the lights in the bedroom” or “Set the Concentrate scene in my study”. Pair this with untethered Hey Siri on newer iPhones and your house is practically a sci-fi movie set.

There may be additional Siri improvements that I have yet to discover, and if you come across any of these, be sure to let me know in the comments or via Twitter. Given the new functionality, however, it’s likely that most if not all the additional commands are centered around rooms, as this is where the majority of the update’s feature improvements are focused. 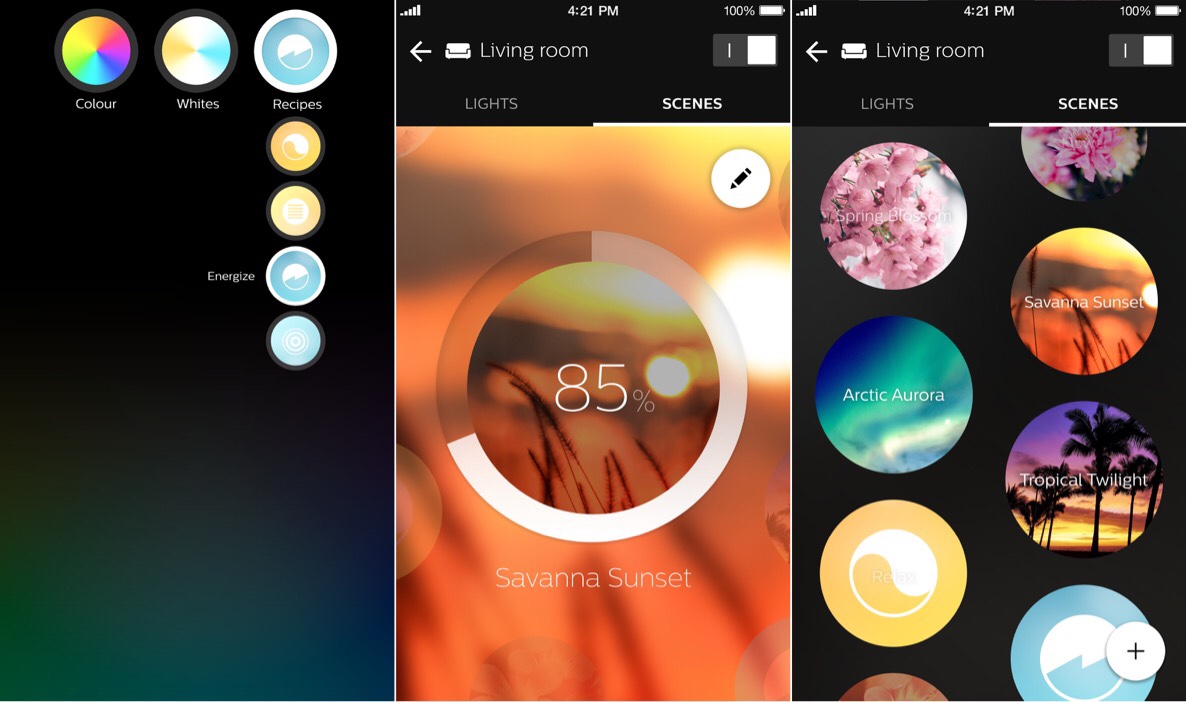 Along with feature upgrades, the app has experienced a complete overhaul in terms of design language and general aesthetics. Gone is the Home screen-like grid of scenes, which is replaced by a more aesthetically pleasing solution. Throughout the app, everything from details such as the on/off switches and icons to the general layout of the app have been completely redone, and this new design language is a wonderful improvement.

Having Philips Hue in the house can be quite an incredible experience, particularly with the second generation bridge. Now when heading out of the house, instead of going throughout the house and flipping off all the light switches, I can just raise my wrist and say “Hey Siri, turn off the lights” and my Apple Watch will proceed to shut off all the lights in the house.

The level of convenience and luxury provided to iOS users through the HomeKit-enabled Hue bridge is unparalleled, and Philips has done an excellent job integrating this technology into the home. This new app is just the icing on the cake, with its ability to assign lights to rooms so Siri can turn off only the lights in a specific room or so the scenes displayed in the Notification Center widget will only change the lights in a certain part of the house.

The second generation Philips Hue app is available as a free download on the App Store and will work with both first and second generation Hue bridges. If you don’t yet have any Philips Hue hardware, you can begin your collection with the Philips Hue Starter Pack for $199.99, which comes with the Hue bridge and three white and color ambiance bulbs capable of producing over 16 million colors and every shade of white, from an energizing blue tint to a relaxing yellow glow.

Update: The current version of Philips Hue gen 2 does not package an Apple Watch app, but support is said to come in the future, although the timeline for this update is unclear.