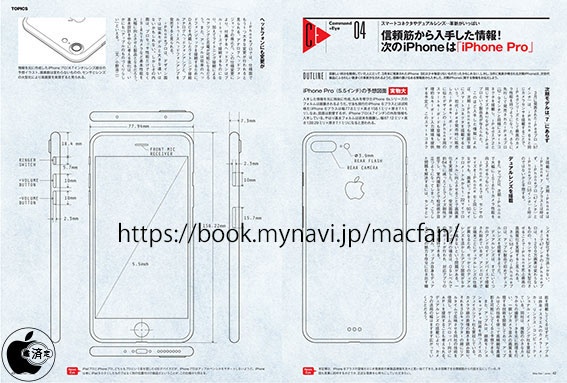 In its June 2016 edition, Japanese monthly Mac Fan brings purported design schematics of Apple’s upcoming iPhone 7 Plus model, which they refer to as an ‘iPhone 7 Pro’. The drawings reaffirm upcoming features such as the removal of the 3.5mm headphone jack, a dual-lens camera on the back and roughly the same dimensions as the current-generation iPhone 6s Plus model.

Detailed design schematics suggest a device measuring 158.22 mm wide, 77.94 mm tall and 7.3 mm deep, indicating Apple’s next smartphone will be the same size as the current flagship model and an imperceptible 0.2mm thicker than the 4.7-inch iPhone 6s.

It’s been rumored the next iPhone will ditch the industry-standard 3.5mm headphone jack in favor of wireless Bluetooth headsets and wired Lightning-enabled headphones. In doing so, Apple won’t be the first maker to say good-bye to the connector.

Chinese handset maker LeEco recently announced a line of smartphones that have no 3.5mm headphone port and instead use USB-C for audio connectivity. And earlier this morning, Intel said it would help make the industry’s “strong desire to move from analog to digital” a reality by phasing out the 3.5mm audio jack and replacing it with USB-C on smartphones, tablets and other mobile devices later this year.