Apple on Tuesday released its earnings report for the first [fiscal] quarter of 2016. As most of you know, this was the iPhone-maker’s holiday quarter, where most consumer electronic companies—particularly Apple—tend to put up monster numbers. And of course Tim Cook and his team did not disappoint.

Once again, Apple has delivered a record-breaking first quarter. The company sold 74.8 million iPhones, up slightly from last year’s 74.5 million, and increased its revenue by more than $1 billion. Not all of the numbers are impressive though, as Mac sales are slightly down and iPad sales continue to tumble.

Here is a breakdown of Q1 2016 numbers compared to figures from the same quarter in 2015.

And here are some comments on the numbers from Tim Cook and Apple’s CFO Luca Maestri:

“Our team delivered Apple’s biggest quarter ever, thanks to the world’s most innovative products and all-time record sales of iPhone, Apple Watch and Apple TV,” said Tim Cook, Apple’s CEO. “The growth of our Services business accelerated during the quarter to produce record results, and our installed base recently crossed a major milestone of one billion active devices.”

“Our record sales and strong margins drove all-time records for net income and EPS in spite of a very difficult macroeconomic environment,” said Luca Maestri, Apple’s CFO. “We generated operating cash flow of $27.5 billion during the quarter, and returned over $9 billion to investors through share repurchases and dividends. We have now completed $153 billion of our $200 billion capital return program.” 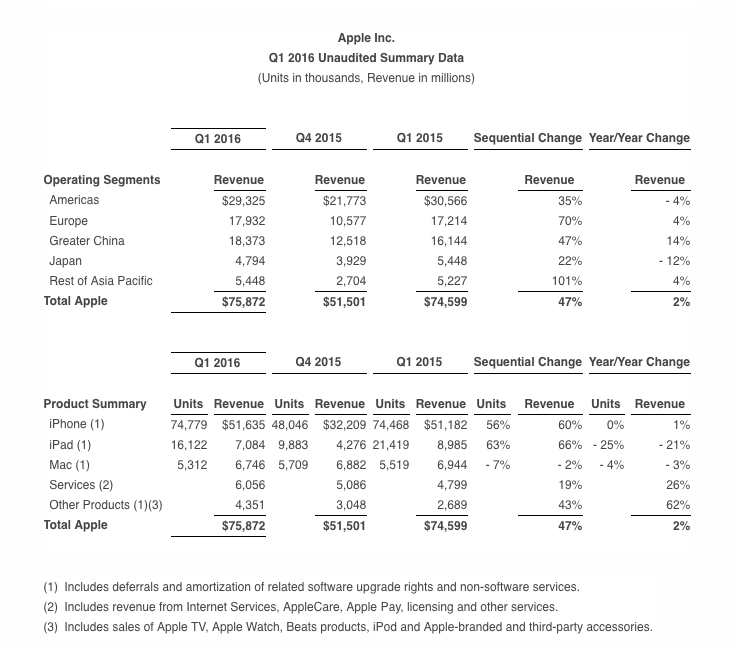 Perhaps the most significant number here, or at least the one Wall Street is paying the most attention to, is the nearly flat iPhone sales. It would seem growth for the handset has stalled, and the company has indicated that it may even decline in the current quarter. This is a big deal for Apple’s biggest product.