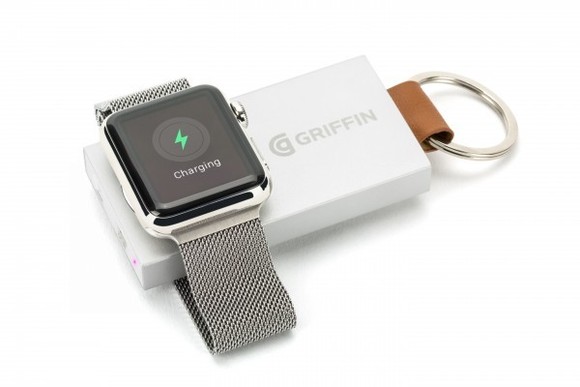 Griffin on Monday added to the stack of CES product announcements by introducing the Travel Power Bank for Apple Watch. As you can see in the photo, the accessory is essentially a tiny battery pack with an inductive charging pad for Apple’s wearable.

Griffin says that the built-in battery is of the 800 mAh variety, which is good enough to fully recharge the Apple Watch up to four times before needing more power for itself. That’s not too shabby for a device that is so small it can be attached to a keychain.

For context, if you’re like me and find it fairly easy to squeeze a day-and-a-half of battery life out of a fully-charged Apple Watch, the Power Bank would allow you to travel for nearly a week without needing a power outlet—longer than a week if you stretched it.

“Our new Travel Power Bank is the Apple Watch accessory users have been waiting for,” said Andrew Biddle, Category Manager of Power Products at Griffin Technology. “With our compact, all-in-one battery and charging cable on hand, users can leave their Apple Watch charging cable safe at home with no worries about running out of power.”

Unfortunately, the Travel Power Bank won’t come cheap. Griffin says the accessory will retail for $69.99 when it goes on sale in Q2 of this year. The good news is that the device uses a standard micro USB cable for charging, and one is included in the package.