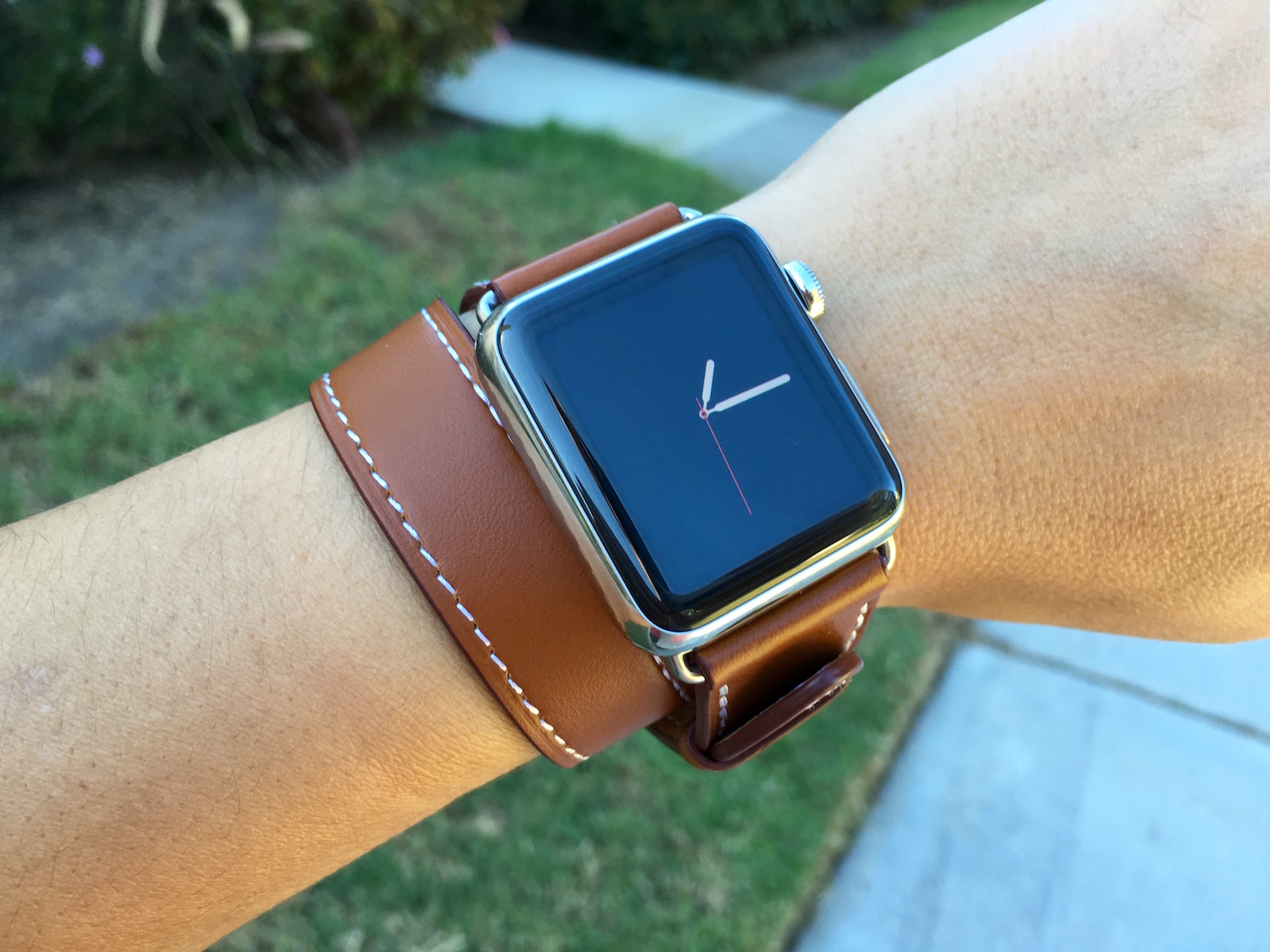 After taking a look at five Apple Watch band knockoffs last week, I want to talk to you about two additional knockoffs I recently received: the Cuff and Double Tour. Directly inspired by (read ripped off) the official Hermès bands for Apple Watch, these two bands are available at a fraction of the price. But is it a good deal?

Packaging tells a lot about a company. It shows care, or lack thereof. It shows a certain amount of self pride, or, again, lack thereof. For the price I paid for these bands, and based on my previous experience with knockoff bands, I really didn’t expect much, but I was pleasantly surprised. Both bands were placed in a nice box, both wrapped around a little pillow. It didn’t scream luxury, but it certainly didn’t look cheap at all. First impressions are very important, and these two bands definitely succeeded here.

My first reaction after taking the bands out of the box was to smell the leather. My skepticism once again having the best of me, I expected to smell chemicals or plastic, or just about anything but leather. But once again, I was proven wrong as these two bands smelled exactly as you would expect from good quality leather.

I started to believe these were actually great bands. They certainly looked like it. The real test would be whether the lugs would actually fit my wife’s 38mm perfectly or not. The lugs, you may remember from my previous post, were my biggest complaint about those knockoff bands, as I had found most of them were poorly manufactured, making low quality products that didn’t fit right.

I was once again taken by surprise when I started sliding the lugs of the Double Tour into my wife’s Apple Watch. The lugs fit perfectly, easily sliding in and out, and locking flawlessly as they are supposed to. If you told me these lugs were made by Apple itself, I would probably believe you. 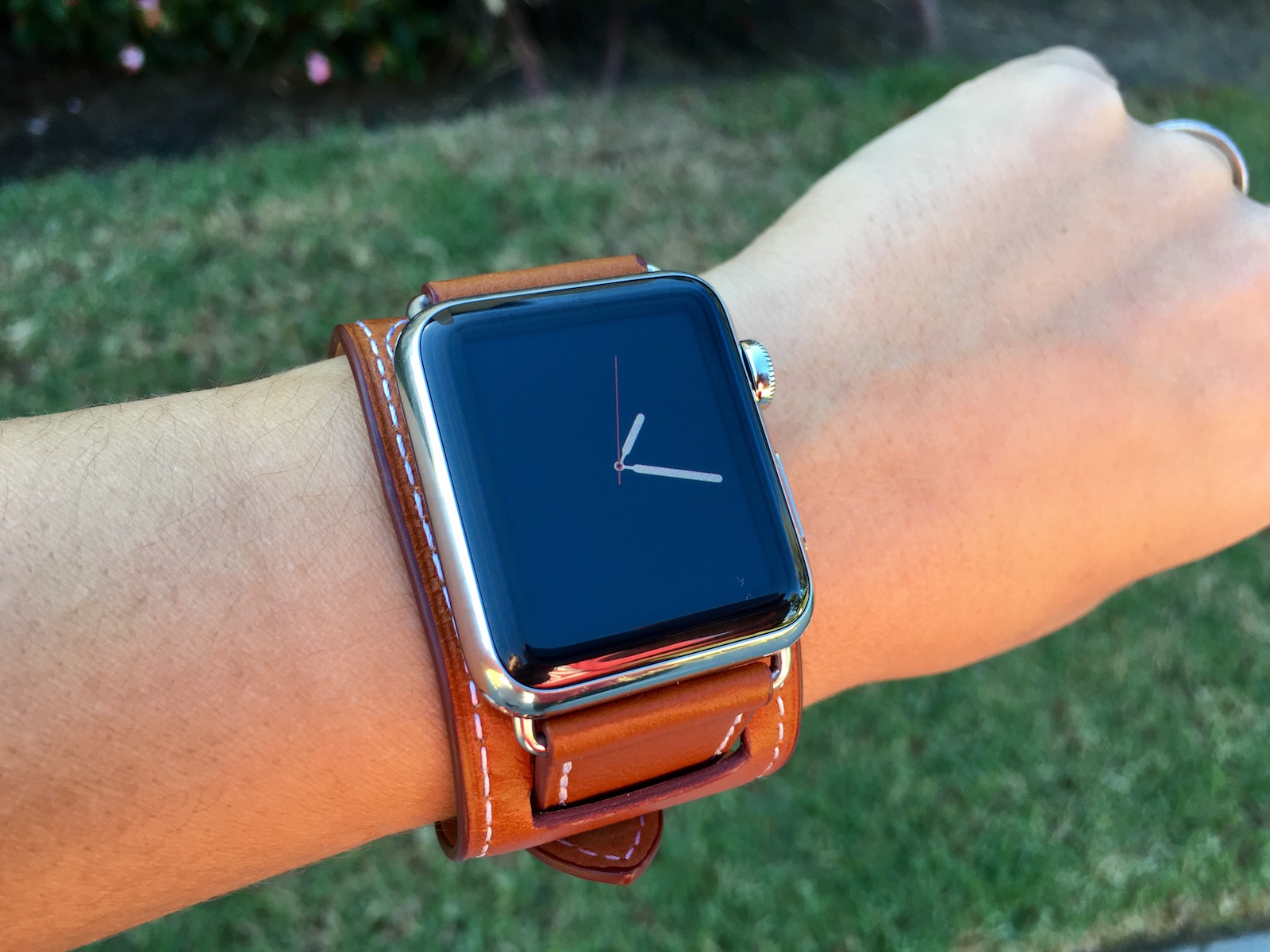 As picky as I am, I couldn’t find any shortcomings to these two bands. I thought my wife certainly would be able to, because clearly, these bands can’t be perfect. Wrong!

The two bands passed “the wife test” without any issue. Of course my wife has a preference for one over the other (she does prefer the Cuff), but she did mention she’d like to keep the Double Tour for special occasions, as it does look a little more dressy than the Cuff.

She’s been alternating between the Double Tour and the Cuff for a little over a week now and she has received several compliments about it from people who aren’t really in the know about Apple products or tech in general. This is to say these bands have some serious appeal.

As far as comfort goes, she did mention that although it may look bulky, the Cuff does feel comfortable on her skin. She’s even worn it while working out, which I really wouldn’t suggest, of course.

As you’ve figured out by now, we are very satisfied with these bands. They look absolutely gorgeous and made of great quality products at a very affordable price. I know there are other Hermès Apple Watch knockoff bands available online, but if you want to go for a product that comes highly recommended, then look no further. Both bands are available in 38 or 42mm, and in various colors.