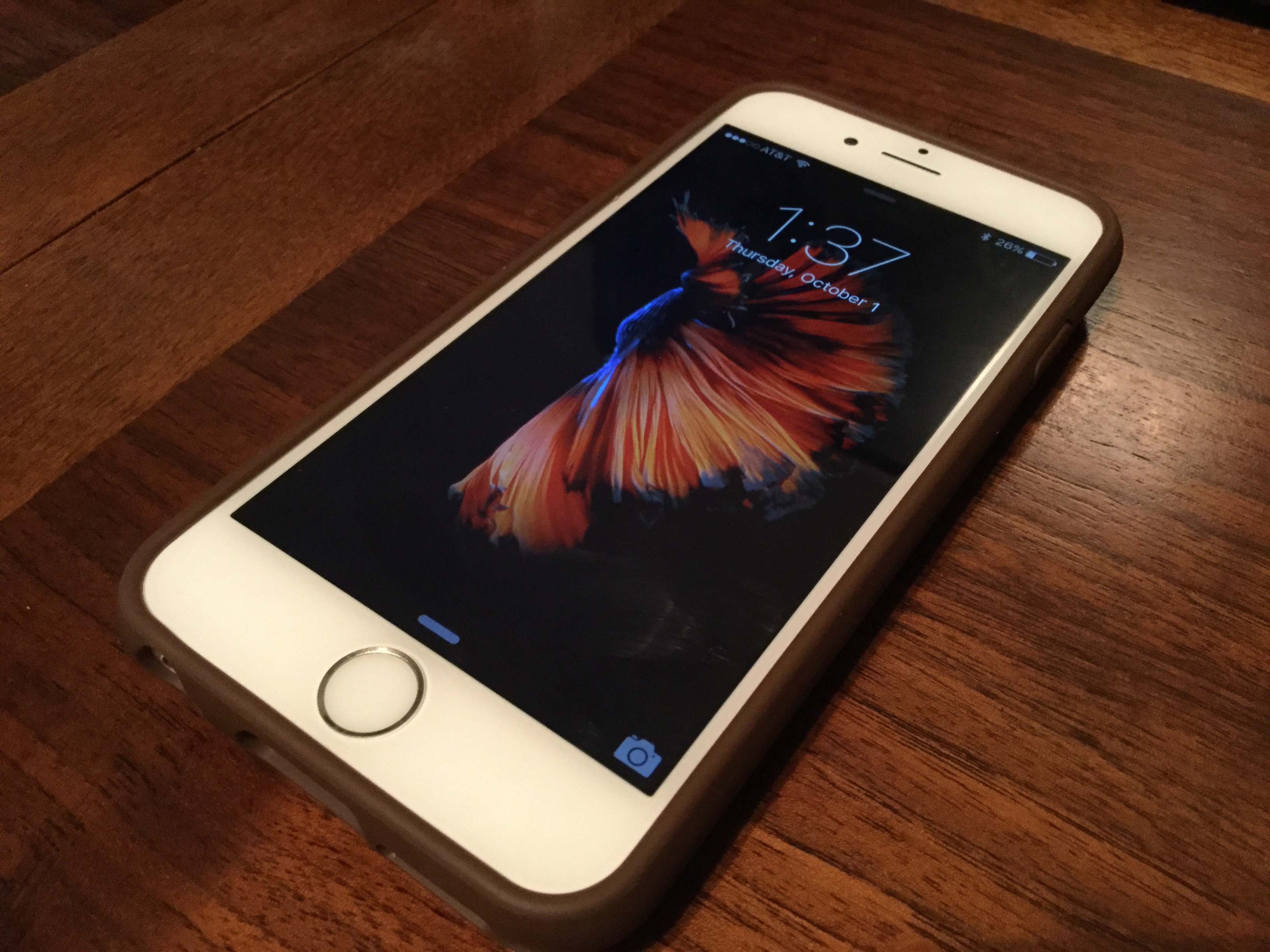 Earlier this week, Lory told you about the CM4 Q Card Case, a hard plastic case that doubles as a wallet. I’ve been trying out the Limited Edition leather version of the Q over the past few days, so I wanted to offer up some insight on the accessory for those considering buying it.

Evaluating an iPhone case essentially boils down to answering two simple questions: does it look good? And is it functional? If the answer to both is yes, the case is usually a winner. If both answers are no, then it’s usually not. If the answer to one question is yes and the other is no, you just have to decide which is more important to you. And that seems like a good place to start this review.

Functionality-wise, the Q hits on virtually every item on the list of things you’d want in a case like this. It seems well-made (i.e. I don’t worry about it falling apart and I haven’t noticed any defects) with materials like soft rubber and genuine leather, and it fits my iPhone 6s like a glove. The bezels sit just above the screen to help protect it from scratches, and the outer shell definitely feels like it could withstand a few drops. All of the requisite openings are here too, including a large one for the iSight camera and flash, and 3 at the bottom for the headphone jack, Lightning connector and speaker.

The wallet pocket is made of leather and is stitched on to the back of the case. CM4 says it’s big enough to fit 3 credit cards and a bill or two in cash, but I’ve found 3 cards alone to be an extremely tight squeeze. This isn’t necessarily a bad thing, as I like not having to worry about my cards falling out, and I imagine the pocket will loosen up over time. This stiffness also helps keep the overall thickness of the phone+case+cards down. As you can see in the photo below, the depth is about the same as my everyday “slim” wallet, which also contains 3 credit cards.

I hate to put “looks” in the bad column, because it’s so subjective—what I think looks good may not appeal to others. That being said, I think more people than not will be put off by this case’s weird blend of aesthetics. I don’t mind the color, as the brown looks sharp against the white face of my iPhone, but there’s a weird black outline around the camera opening, and I feel like the leather-plastic combination looks odd. What really ruins it for me, though, is the unsightly metal CM4 badge that sits atop the leather. Not only is this gaudy, it’s likely to scratch any surface it comes in contact with. 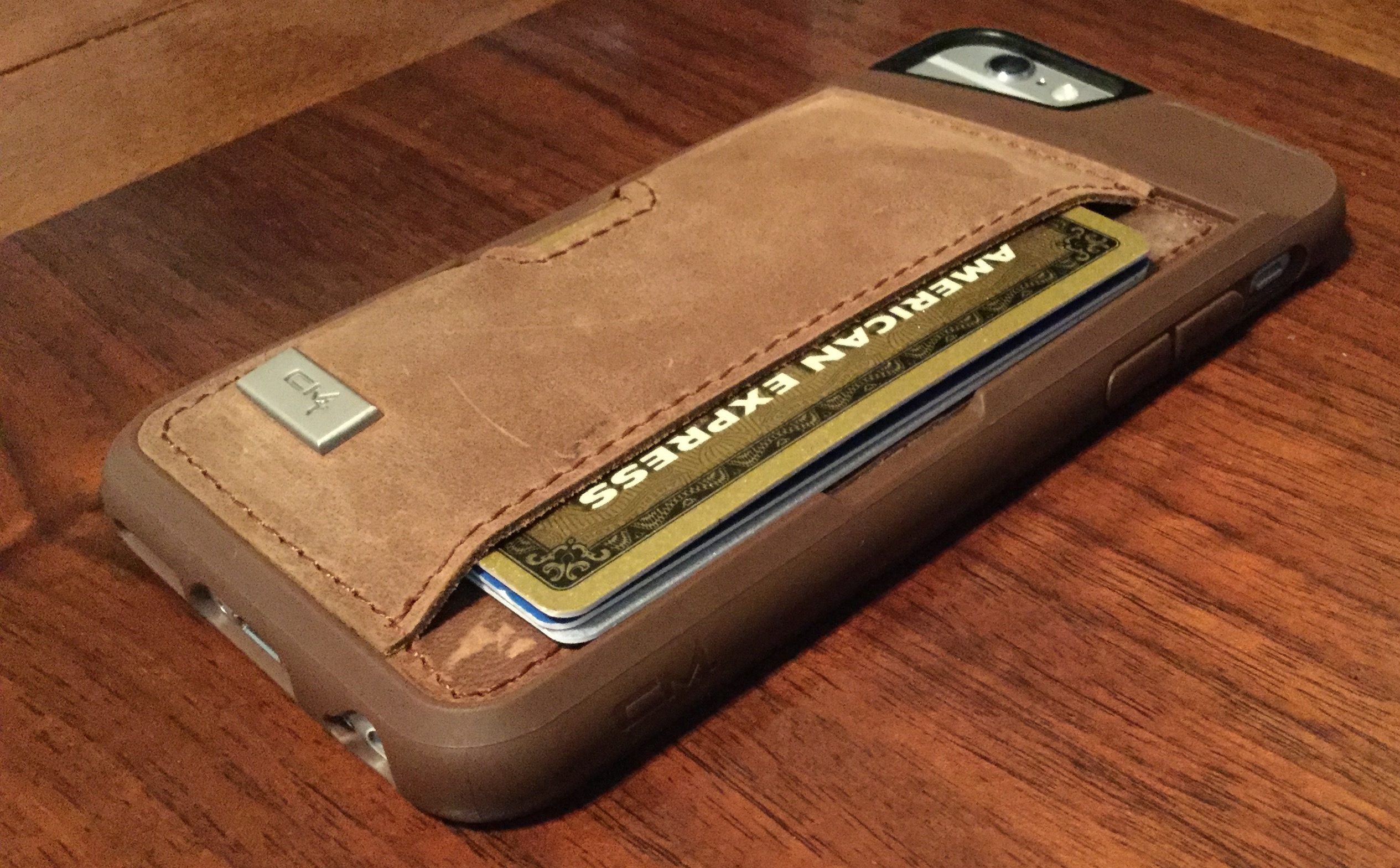 Another feature of the case I haven’t been impressed with are the plastic coverings for the volume and sleep/wake buttons. I like the idea of these buttons being protected from dirt and debris, but these covers are very stiff. It makes pressing the buttons a bit of a chore—particularly the sleep/wake button, which has become much more important to me now that Touch ID in the Home button works too fast for Lock screen glances. Again this is one of those things that could loosen up over time, but it’s still an annoyance now.

Finally, it’s worth mentioning that this case prohibits me from using either of my iPhone charging/speaker docks. I know this is usually the case (no pun intended), but there are a few exceptions where the iPhone is either totally exposed at the bottom, or there’s a large enough opening around the Lightning connector to accommodate docks. This isn’t one of them, and it’s been a notable inconvenience for me.

I’m aware of the message it sends when the Good section is shorter than the Bad, but the truth is I actually like this case. I won’t keep using it daily, due to its incompatibility with my docks and the other annoyances I outlined above, but I will keep it around for special occasions when I need to travel light. It’s well-made, protects my iPhone, and it can carry my driver’s license and two credit cards, allowing me to leave my wallet at home.

So would I recommend the case to others? Absolutely. I realize that CM4 isn’t a mainstream brand, and the plastic+leather look may not be for everyone. But if these things don’t bother you, this really is a solid case. If you don’t want to take my word for it, head on over to Amazon, where the Q Case has a rating of 4.5 out of 5 stars on nearly 1,000 reviews.