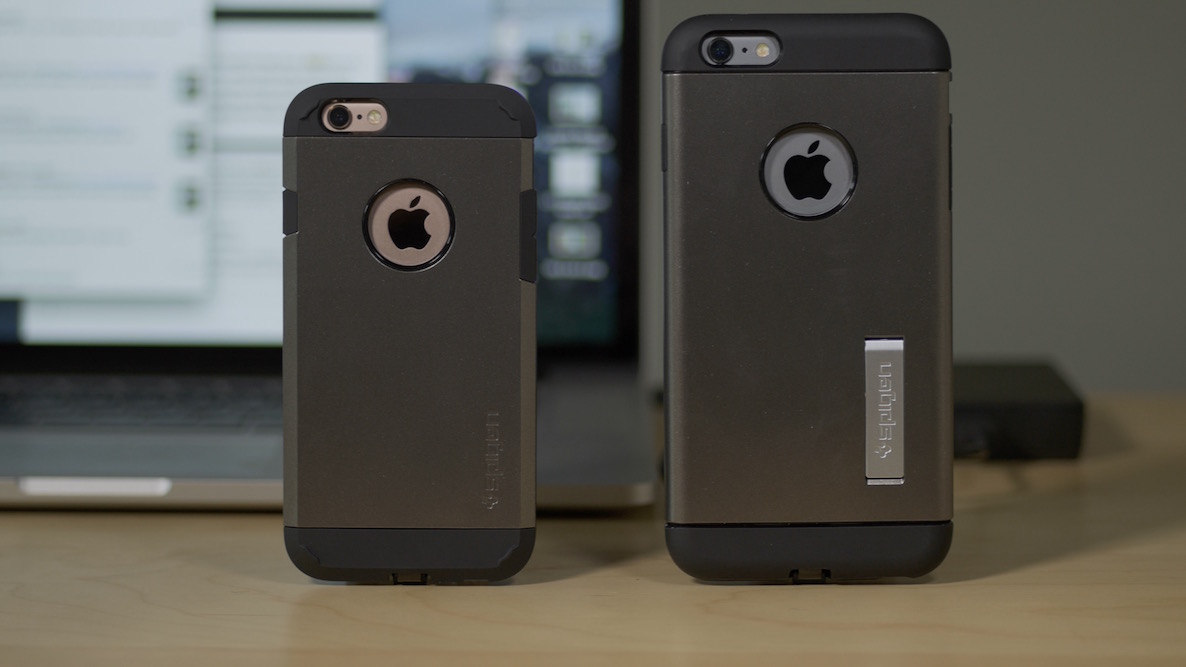 In addition to Spigen’s GLAS.tR SLIM screen protector, I’ve been using its Slim Armor Volt wireless charging case for my iPhone 6s Plus. Spigen sent me a care package filled with a boatload of cases, and this one was by far the most intriguing to me.

There are a good number of Android phones that feature wireless charging capabilities out of the box, but there has never been such a feature for the iPhone. Instead, iOS users will need to opt for some sort of third-party wireless charging case solution, and the Spigen Slim Armor Volt fits the bill.

How well does it work? Watch our full video review and see for yourself.

I prefer the build of the smaller Tough Armor Volt the best. This iPhone 6s case is designed in a blocky manner that makes it easy to grip the iPhone. It brought back memories of the iPhone 5 and iPhone 5s’ design, which is always a good thing in my eyes. 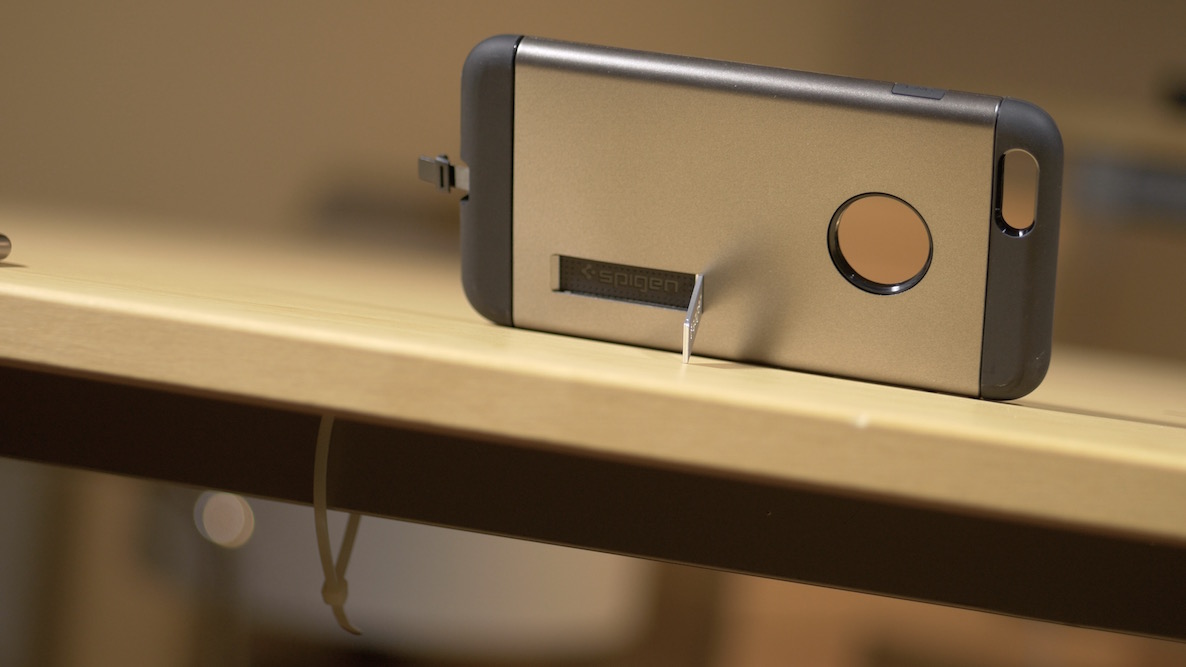 The iPhone 6s Plus is already a bit unwieldy as it is, and the Slim Volt Armor case adds on to that. It’s not a bad case or a bad design, but it feels dense. The corners for the larger case, ironically entitled “Slim”, are rounded off just like the iPhone 6s Plus’s aluminum body.

Case aesthetics aside, the actual wireless charging setup works well enough. Each case features a Lightning connector that’s attached via a flexible connector. Once your iPhone is in its case, flip the connector around and press it firmly into its Lightning port. The connector features an indention so that you can easily remove it, but I can’t help but think that the flexible connector will end up wearing out after continuous disconnecting and reconnecting. 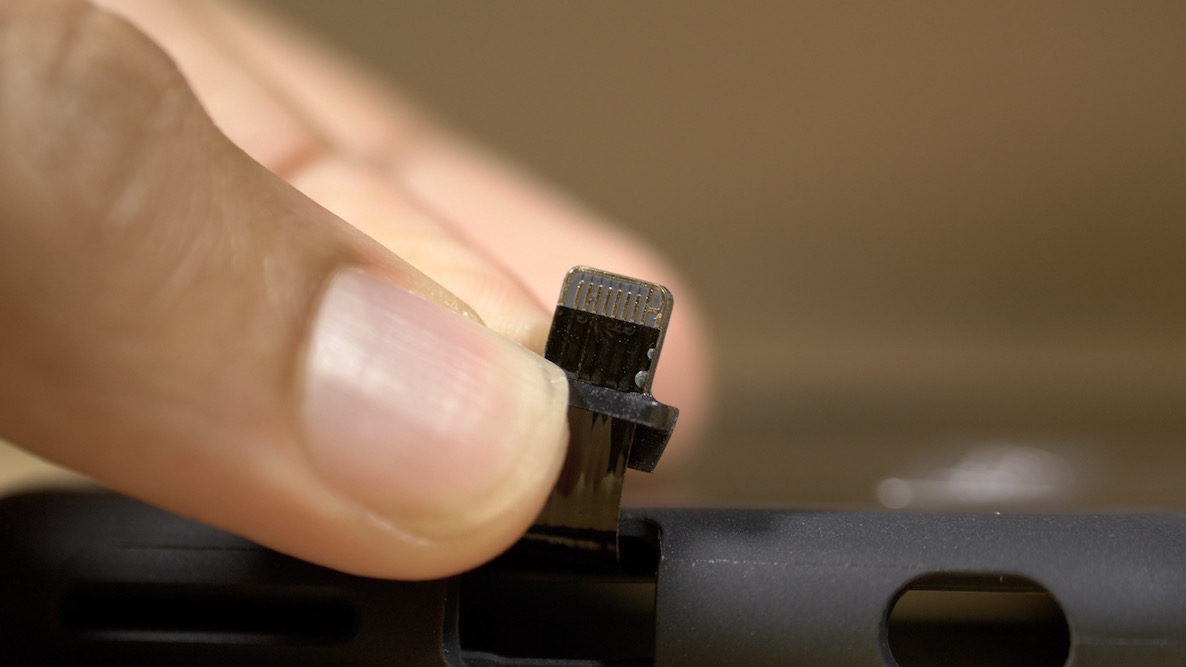 The Lightning connector is attached with a flexible cable

The advantage of Spigen’s decision to implement a flexible connector is that it allows the case to be charged wirelessly or via a traditional USB cable on a whim. Simply remove the attached Lightning connector whenever you wish to connect a separate Lightning cable destined for external charging sources.

Spigen included its Wireless Charger, which is what you can use to actually initiate a charge using the case. Charging is performed inductively, similar to the Apple Watch charger. You place the case-bound phone on the wireless charger, and the juice starts flowing. You don’t have to connect any cords or cables directly to your iPhone; it all works inductively through the little inductive charger that’s located on the bottom lower side of the Spigen case.

The wireless charger requires that you connect an iPad style power plug (not included) to the USB micro cable that comes with the stand. It’s too bad that you have to supply your own power supply, but I see more and more companies doing that these days.

I found that the actual charging was a little slow. Keep in mind, however, that inductive charging, at least in its current form, will always be less efficient than traditional charging methods. Spigen claims that its wireless charger is 70% efficient, which may be about right. I’ve heard other reviewers say that Spigen’s cases work well with third-party Qi chargers, the same tech that this wireless charger stand is based on, but your mileage may vary. 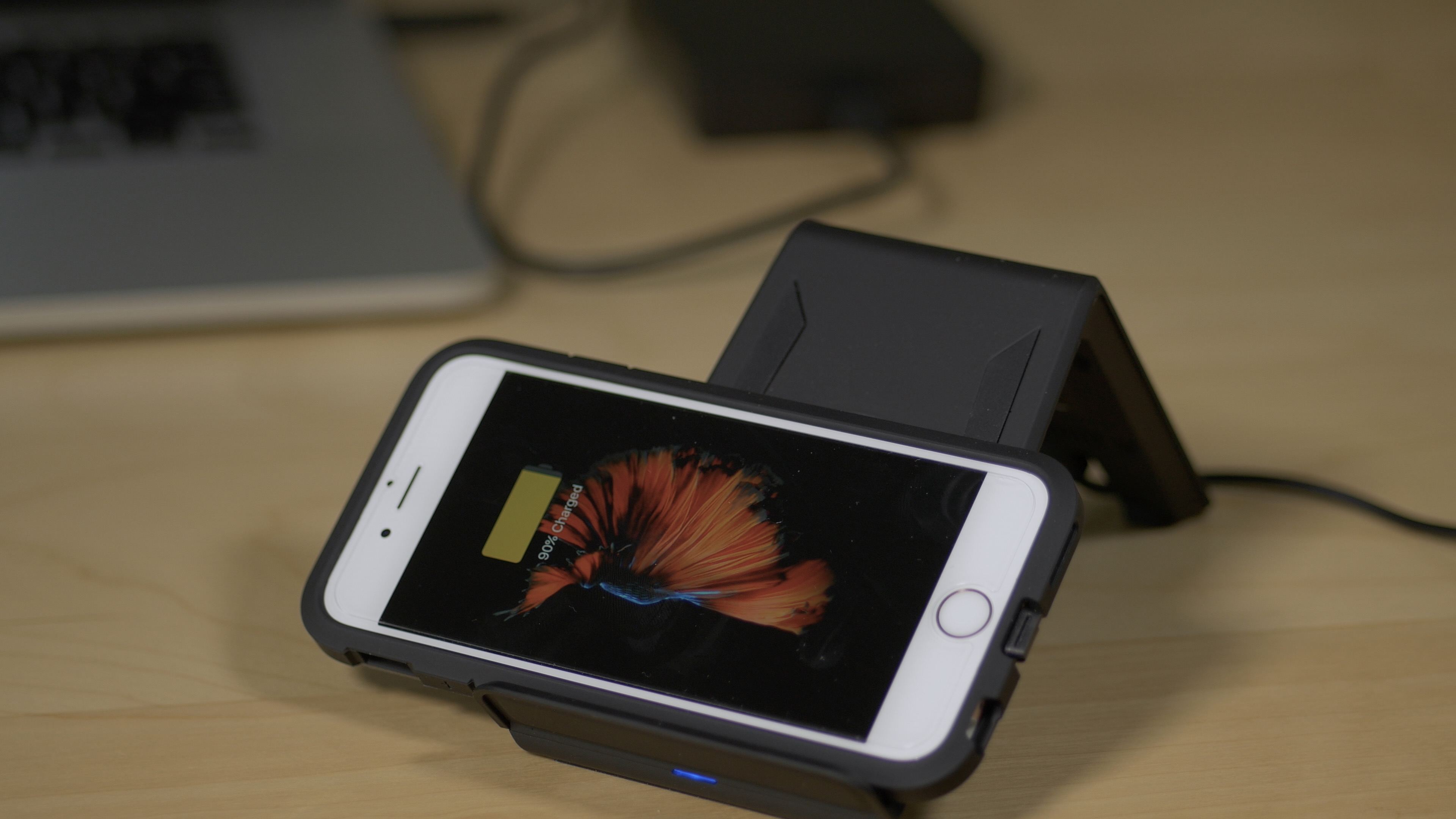 Yep, you can even charge the iPhone 6s sideways

Overall, there’s something really cool about being able to just sit your phone down on a stand, and not worry about hunting for cables and plugging it in. As someone who’s never used so-called wireless charging before, I have to say that I was impressed. More than anything, I was impressed by how much I love the idea of wireless charging. Obviously, it’s not truly wireless, as there’s still a power cable going from the wall outlet to the wireless charger stand, but there are no wires going from the iPhone 6s to the stand itself.

What’s more, Spigen’s cases are reasonably priced, and work with any Qi certified stand. If the iPhone 6s was my daily driver, I could certainly see myself using the Tough Armor Volt case on a regular basis. I’m not so sure about the iPhone 6s Plus version, but I’m going to roll with it a bit longer just to see if I can handle it.

The Spigen Volt + Wireless Charger setup isn’t the fastest way to charge your iPhone, but the convenience factor certainly is there.