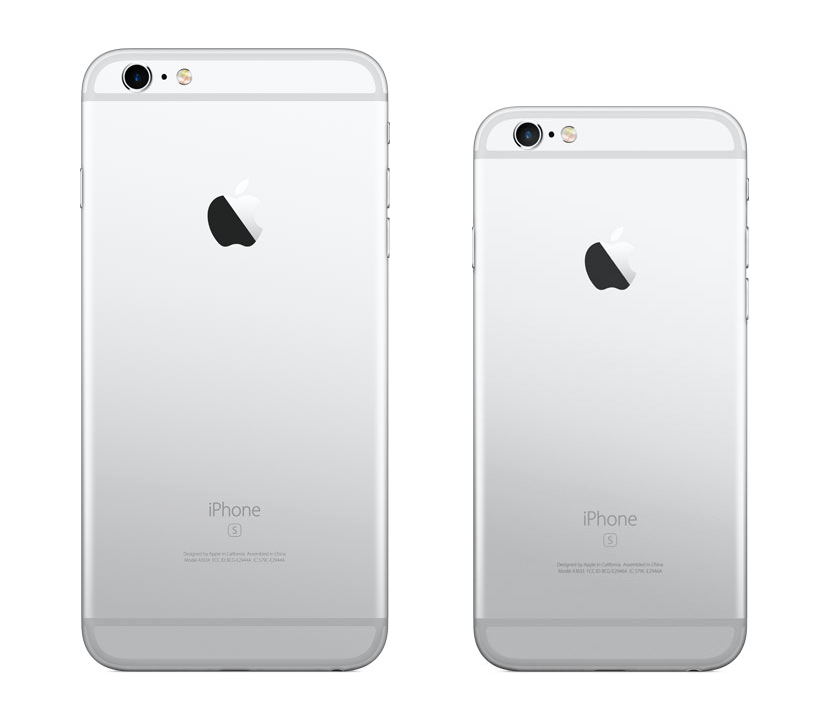 As of today’s big launch announcement, Apple now has four really powerful smartphones in its lineup, not including the entry-level iPhone 5s. At the lower end of the totem poll, there’s the iPhone 6 and 6 Plus. At the top of the lineup are the just-announced iPhone 6s and iPhone 6s Plus.

How do all of these devices compare? What about things like battery life, size, and weight? In this comparison post, I’ll breakdown the differences between each of Apple’s iPhone offerings. 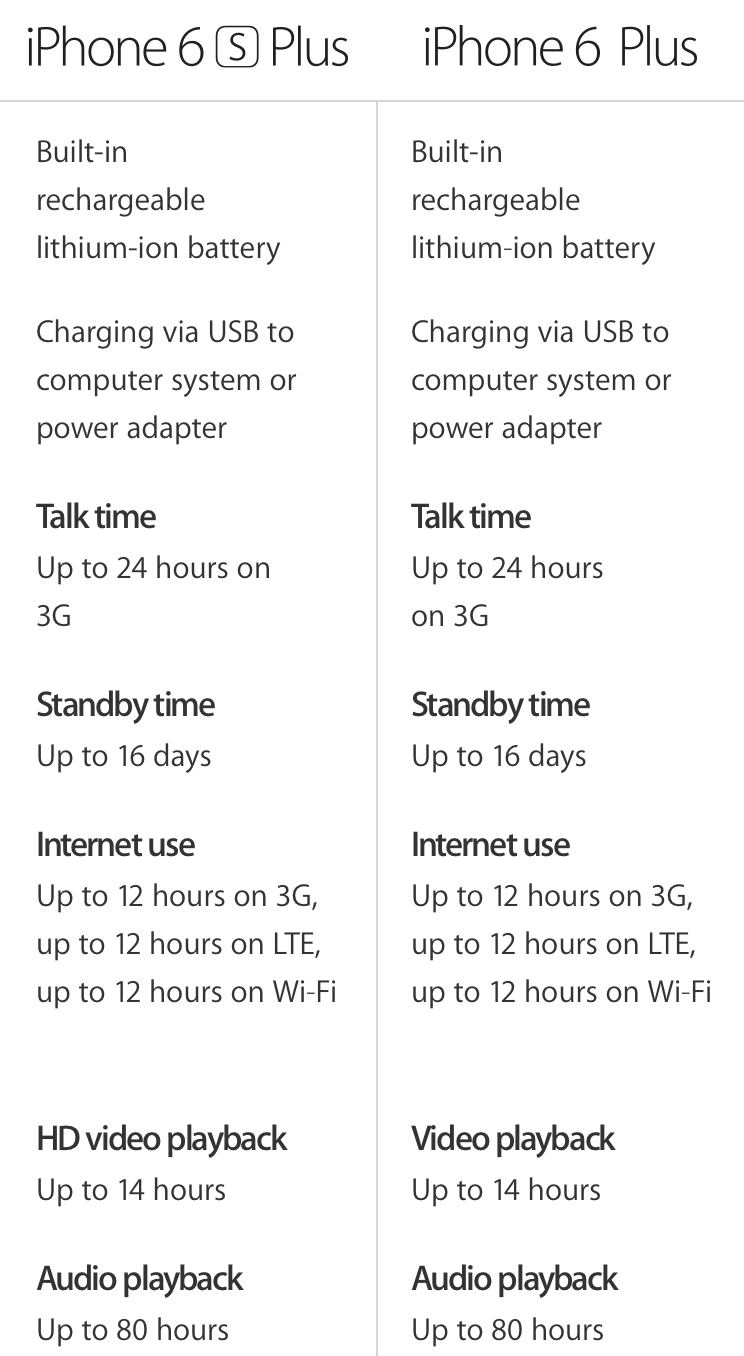 First, lets consider what many people consider to be the most important factor–power and battery life. Unsurprisingly, the larger battery contained in both the 6 Plus and 6s Plus allows for increased battery life over their smaller siblings.

The same trend continues with standby time. The larger versions of Apple’s smartphone line get over two weeks of standby time on a single charge, while the more diminutive versions get up to 10 days max. 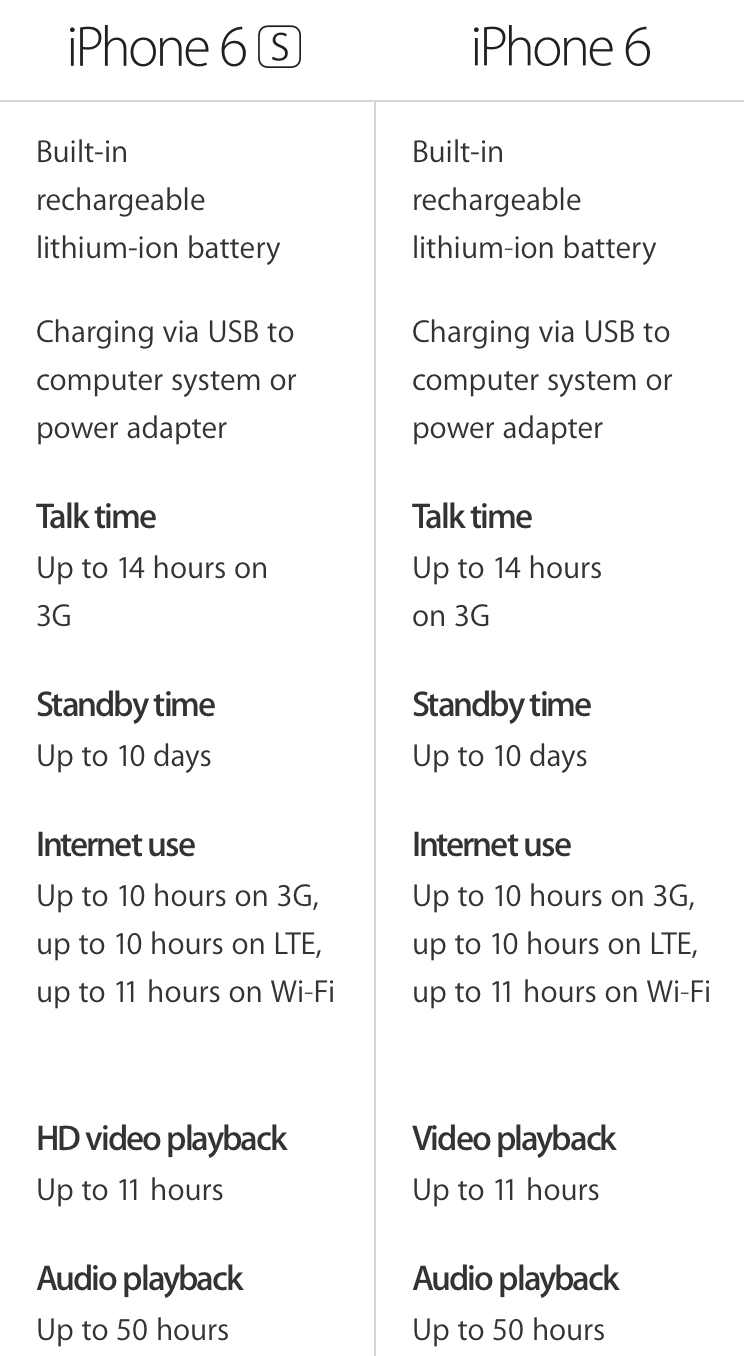 Again, similar patterns can be gleaned from Internet use over 3G, LTE, and Wi-Fi, with the 6 Plus and 6s Plus yielding 1-2 hours of additional performance. 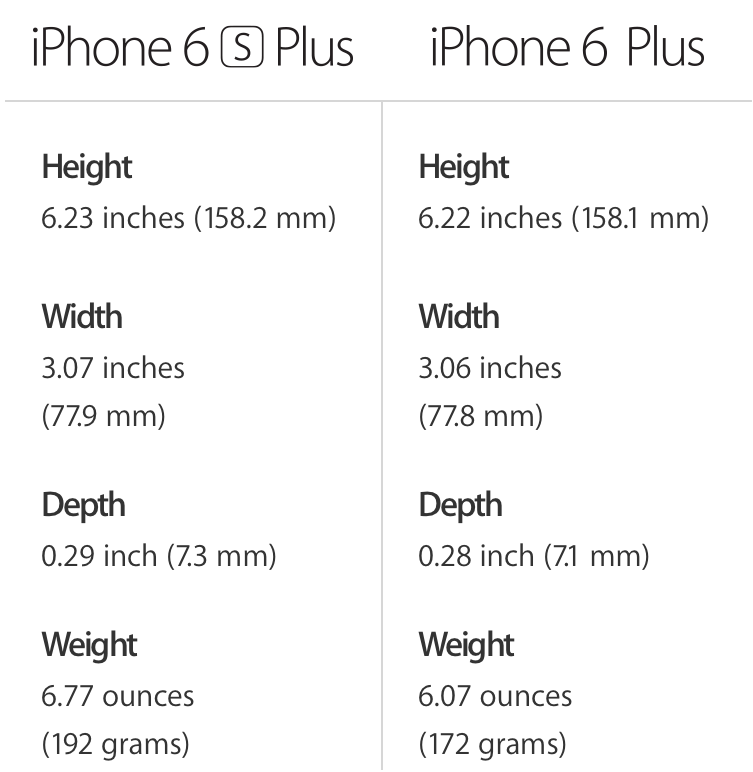 Now lets consider something that doesn’t get as much fanfare as battery life, but still very much matters in day to day usage—weight and dimensions.

Obviously, the iPhone 6 Plus and 6s Plus are substantially larger and heavier than their smaller siblings, but lets break down the weight and size differences between both big devices and both smaller devices.

The new iPhone 6s Plus weighs 6.77 ounces. Last generation’s iPhone 6 Plus weights 6.07 ounces. So if we do the math on that…

When you’re talking about mere ounces, that’s not really a lot, but for a device that you hold all of the time, there’s bound to be somewhat of a noticeable difference, even if it’s as subtle as all get out.

Now let’s compare the iPhone 6s and the last-generation iPhone 6. The iPhone 6s weighs 5.04 ounces, and the iPhone 6 weighs 4.55 ounces. Again, let’s do the math…

Both devices feature roughly a 11% increase and weight when compared to the models that they replace.

When it comes to dimensions, things are a bit more imperceptible. There’s definitely a dimension increase with the new models, but they would probably go unnoticed by most.

The iPhone 6s Plus is 6.23 inches tall, while the last-generation iPhone 6 Plus is 6.22 inches tall. That makes for about a 0.2% difference in height. Again, nearly imperceptible, unless you happen to be a laser cut case maker. 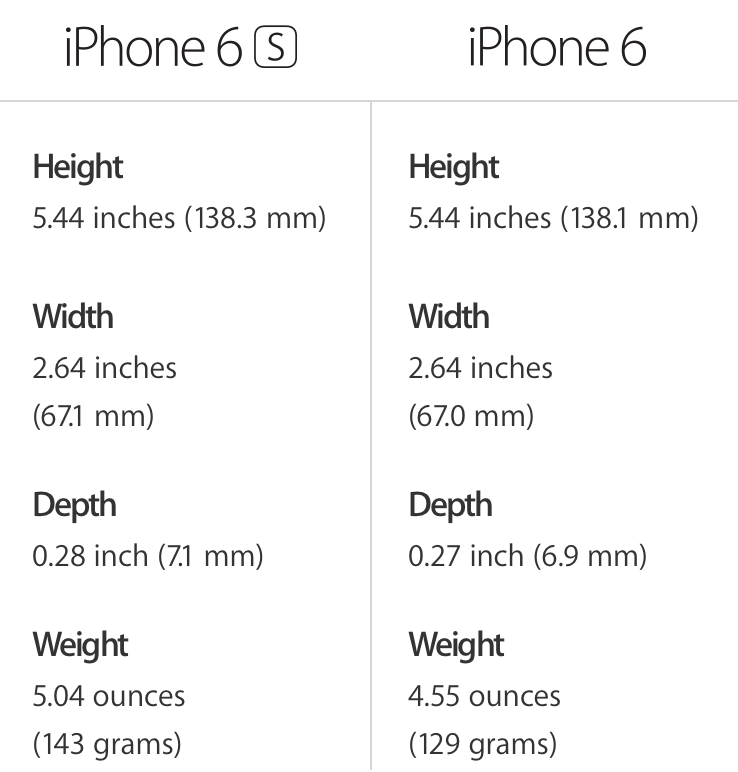 Likewise, the width between the 6s Plus and 6 Plus is a small difference, just 0.3%.

Depth will be slightly more noticeable due to the device’s overall shallowness, yet it’s still a very small difference. The calculated depth percentage difference is about 3.4%.

You can expect the iPhone 6 versus iPhone 6s to yield similar results.

With these changes in dimensions in mind, it’s quite possible that your current iPhone 6 or iPhone 6 Plus case won’t properly fit your new iPhone 6s or 6s Plus. It might be able to squeeze in there, but if it’s a high quality case with super-precise schematics, then chances are it may have a problem, especially if it’s not made out of a flexible material like silicon.

What do you think bout the size and dimension comparisons between Apple’s next-gen and last-gen iPhones? Is there anything that particularly stands out to you?