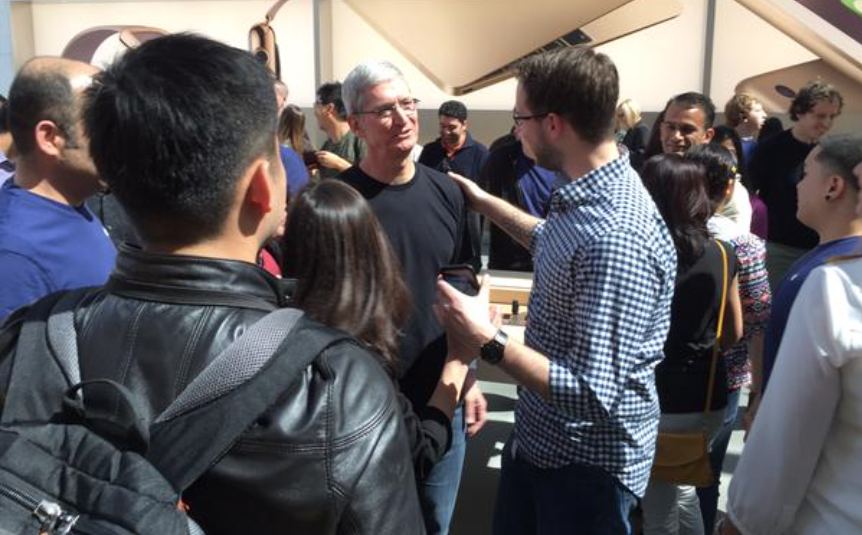 Tim Cook took time out of his day on Friday to visit his local Palo Alto Apple Store, to greet folks trying on the Apple Watch. The CEO shook hands, posed for photos, and fielded questions regarding Apple’s highly anticipated wearable.

CNBC was on hand for the meet-and-greet and managed to speak with Cook for a moment about the Watch, and what he’s seen in terms of initial response. Unsurprisingly, he says the company has been “impressed” with consumer enthusiasm.

“Customers have been giving us great feedback and orders have been great, as well,” Cook said. “Reaction to the smartwatch has been extraordinary.” The executive of course had his own Apple Watch on: stainless steel with a white Sports band.

Apple Watch pre-orders went live at 12:01am today for 9 launch countries, and the limited inventory was quickly depleted. Within minutes, shipping estimates for many models were pushed back to May, and now they’re showing June and July.

The Apple Watch officially launches on April 24, with prices starting at $349. If you weren’t able to make it into an Apple Store today to see the Watch in person, be sure to check out our hands-on video for some first impressions of the device.