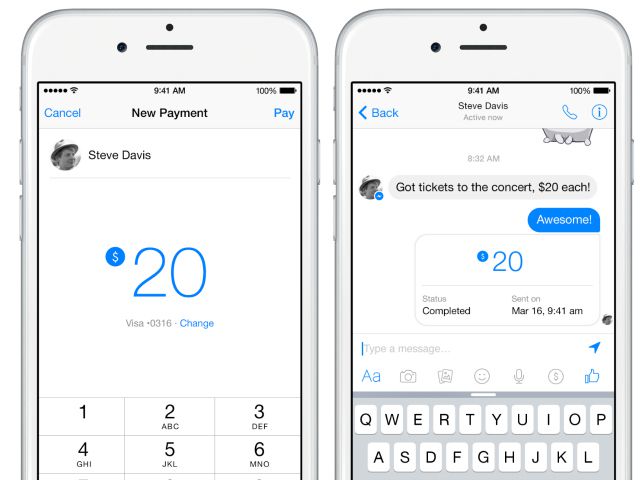 Facebook announced on Tuesday that US-based Messenger users will be able to use the app to send money to their Friends. The process, similar to Square’s ‘Cash,’ involves linking a debit card to the service, which you can use to send money just as easily as a photo or text.

Users who have received the update will notice that the Facebook Messenger app now includes a small “$” icon above the keyboard, next to photo and sticker icons. Tapping this opens a payments screen where users can enter in the amount they wish to send to the recipient.

Your money is then transferred to Facebook for “seconds,” before it’s pushed to the recipient’s bank. If they haven’t attached a debit card yet, Facebook will hold the money until they do. The entire system is in-house, so your debit card info will be housed on Facebook’s servers.

Speaking with Recode, Facebook product manager Steve Davis says the social network has been storing this kind of information for years, for app and game payments. In fact, they’ve added an extra security layer here: users must setup a pin number or Touch ID to send money.

It’ll be interesting to see what happens here, because if even a fraction of Messenger’s 500+ million users sign up, it would put Facebook on par with other mobile payment options such as Square or Apple Pay. But given FB’s ongoing privacy concerns, that may be a tough task.

The update is rolling out to all users in the United States. If you don’t already have Facebook Messenger, you can find it in the App Store for free.