Samsung is remaining mum on pricing for either handset, but has revealed specifications for the devices. Both the Galaxy S6 and Galaxy S6 Edge feature a 5.1-inch quad HD display, 2.1GHz quad-core processor, Android 5.0 Lollipop, 16-megapixel OIS rear-camera, and 5-megapixel front-camera.

The introduction of both handsets wasn’t in the company’s typical fashion. Samsung’s event at Mobile World Congress wasn’t a theatrical affair, instead the South Korea-based company got to the point when it came to ushering in its reinvigorated product line. It was quite refreshing.

The screen size hasn’t changed from the Galaxy S5, but the resolution has been increased from 1920×1080 pixels to 2560×1440 pixels. According to Samsung, it’s 25 percent brighter than the Galaxy S5’s display, and packs better outdoor visibility.

The Galaxy S6 keeps with similar designs that Samsung has chosen in the past, however this time, it’s included an improved fingerprint scanner on the home button and has opted to enclose the battery and take away the removable microSD card that many Android fans seemingly can’t get enough of. As we saw in leaks, the bottom of the smartphone looks a lot like the iPhone 6 and the headphones look like Apple EarPods. 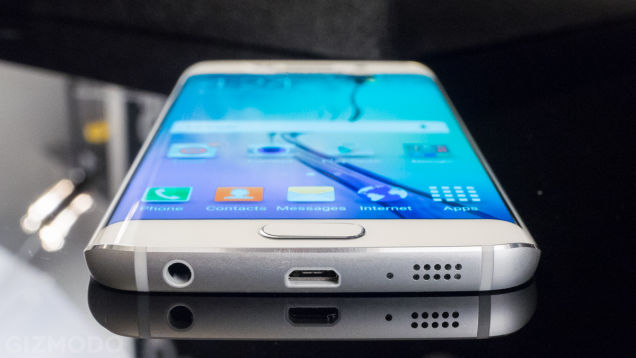 The Galaxy S6 Edge is a different approach by Samsung. The smartphone features a display that curves and wraps around the left and right sides of the phone. Not just for looks, the curved portion serves as a secondary display where users can view notifications and launch applications with one hand.

Samsung says both smartphones can charge in half the time as an iPhone 6, getting four hours of battery charge in just 10 minutes of being plugged in. They both have wireless charging.

Using the MST technology, which Samsung got through its LoopPay acquisition, the company believes it has a leg up on Apple being compatible at more stores. Samsung expects Samsung Pay to work at 30 million stores, by holding the phone near a traditional card swipe reader, essentially making it backward compatible for nearly all payment terminals.

Samsung Pay will launch in the US and South Korea in the summer, with Europe and China to launch later. “Samsung Pay will reinvent how people pay for goods and services and transform how they use their smartphones,” JK Shin, Samsung’s mobile boss, said.

What do you think of Samsung’s new approach?