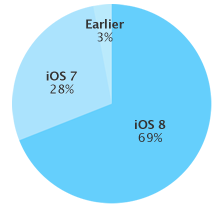 The rate at which people are upgrading their iPhone, iPod touch and iPad devices to iOS 8 is slowing in the post-holiday season. As noted on Apple’s own App Store Distribution support page, though iOS 8 adoption is edging toward the 70 percent milestone it’s barely hit the 69 percent mark on Tuesday.

That’s a rather paltry one percentage point jump over an adoption rate of 68 percent as measured just two weeks ago. And by comparison, that figure was a healthy four percentage points increase over the previous December 22 update.

iOS 7 is currently installed on 28 percent of devices in the wild, while three percent of iPhones, iPods and iPads run an earlier version of Apple’s mobile operating system.

It’s interesting that iOS 7’s adoption rate has not changed since the last update two weeks ago — the one percent of newly added iOS 8 devices came solely at the expense of pre-iOS 7 hardware.

We’re expecting to see an uptick in iOS 8 adoption rates in the coming days as Apple releases iOS 8.1.3, a bug-fix update said to improve the experience and therefore give those iOS 7 users more reasons to upgrade.

Another major surge in iOS 8 adoption should come in the form of the major iOS 8.2 software update that should release ahead of the Apple Watch’s arrival in March.

Finally, as Apple today reiterated in its email to developers, beginning February 1 apps not built with the iOS 8 SDK will no longer be accepted into the App Store.

The deadline updates to existing apps is June 1.

So this way or another, people are going to have to run iOS 8 if they are to enjoy the latest apps and games released next month onward.

Signing off, as noted by The Loop, Android Lollipop adoption rate is too small to even appear on Google’s distribution chart. Last updated on January 5, the chart had Android 4.4 Kit-Kat at 39.1 percent, Jellybean (Android 4.1.x through 4.3) at about 46 percent, while Lollipop didn’t even register.

For the sake of clarity, Google only reports devices that have accessed its Play store in the past fourteen days, which excludes a huge amount of low-end hardware, Chinese devices that run third-party stores and any hardware running forked Android versions, like Amazon’s Fire-branded gear.