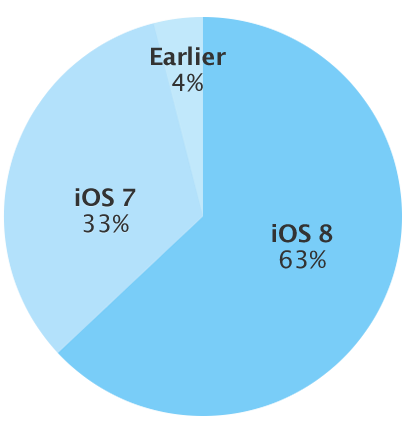 Apple noted today on its developer portal that 63% of iOS devices are now running iOS 8. The data, which was measured by the App Store on December 8, 2014, shows that the adoption rate has gained 3 percentage points since November 24, which was the last time Apple shared that data. Although the adoption rate of iOS 8 has been slower than previous major annual software releases, it seems that it’s slowly but surely picking up steam.

In terms of adoption rate of previous software versions, iOS 7 is a distant number 2 with 33%, and iOS 6 and earlier versions represent a small 4%.

For comparison, at about the same time last year, iOS 7 adoption rate was at 74%. This is a stark difference that can be explained by the fact that iOS 8 requires about 2GB of free space on devices in order to download and install. But with the incremental updates released lately that offer arrays of bug fixes (iOS 8.1.2 was released this morning), it appears that people have been able to make room on their devices, or they simply updated via iTunes, an easy way to update to the latest software regardless of storage space available on the device.

Adoption rate is calculated only for devices capable of running iOS 8, meaning that the iPhone 3G for example isn’t taken into account since it cannot run iOS 8.