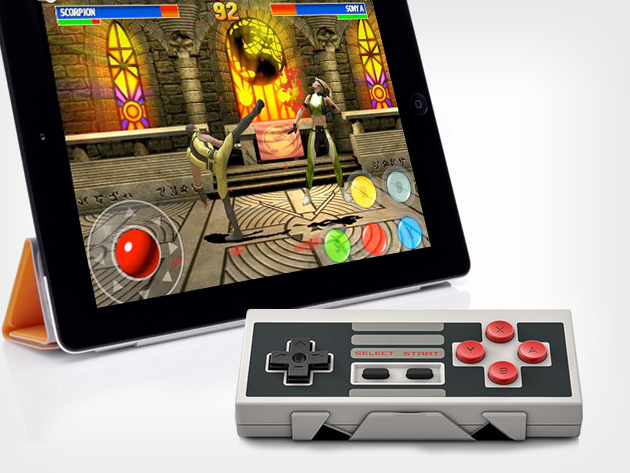 If you’re an iOS gamer, or have one on your holiday shopping list, you might want to check out this deal on this NES-style Bluetooth controller. It’s called the NES30, and for a limited time, Stack Social is offering it at 25% off of its regular retail price.

The controller features two additional action buttons, and two shoulder buttons, but other than that it’s nearly identical to Nintendo’s classic gamepad. It works via both Bluetooth and USB, supports multiplayer, and has a 20+ hour rechargeable battery.

The NES30 connects to iOS, Android and Windows Phone Devices, as well as Nintendo’s Wii console and both Mac and Windows computers. 8Bitdo doesn’t say it’s MFi-certified, but it does say “supports iOS 7 games” and works with the iCade platform.

What’s in the box: included in the box is the NES30 gamepad, an Xtander stand for your devices, an FC30th Anniversary key chain, a USB cable and a user manual. The product is covered by a full one-year manufacturers warranty with replacement.

Typically the controller goes for $40, but for the next 5 days, Stack Social is offering it for $29.99 with free shipping. The promotion is available in dozens of countries around the globe. For more information on the deal, or to by the NES30, click here.