From the same team that brought you the iPhone 5s stock-tracker app last year in the form of the Stock5S.com website comes a new web app which allows prospective iPhone 6 and iPhone 6 Plus buyers to check availability information across 21 countries where the handsets are officially available for order or pre-order.

Found at iStockNow.com, the website covers as many as thirty-five retail spots, mostly in the United States, United Kingdom, Germany and France. The information is refreshed daily and additional shops and countries are coming soon.

Availability and pricing info in the United States is based on information from AT&T, Verizon, T-Mobile and Apple. 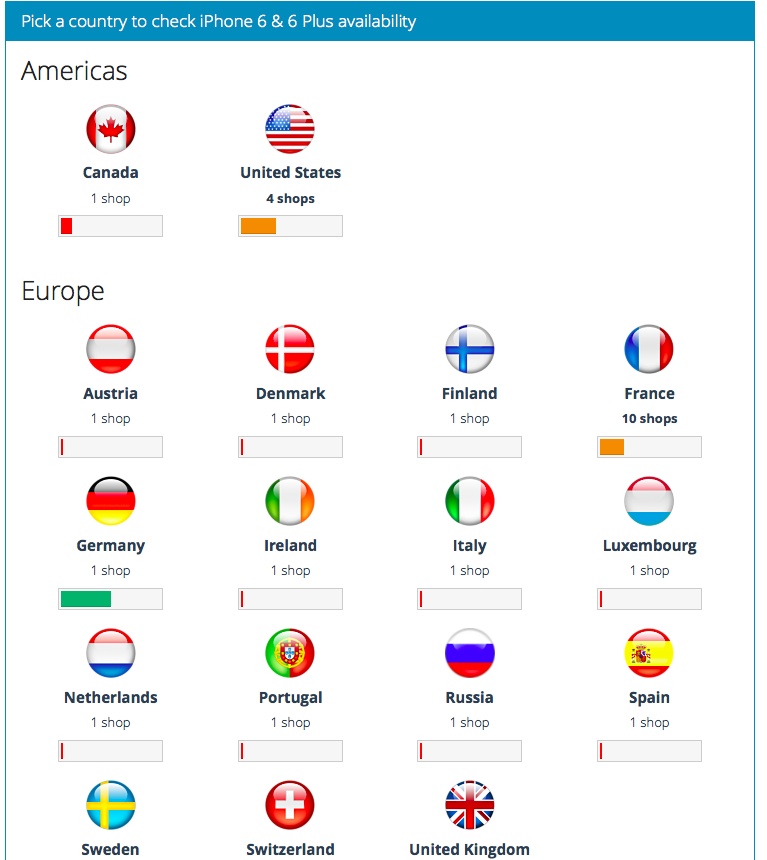 Even more interesting is the price comparison tool, seen below. It normalizes prices across different markets by converting price points in local currencies to US dollars (taxes included), based on the 16GB entry-level iPhone 6 model.

For example, users in Germany would pay an equivalent of $903 for the contract-free iPhone 6 with sixteen gigabytes of storage, versus $700 in the United States.

That’s slightly lower than the normalized price of $948 for the unlocked 16GB iPhone 5s last year (versus $649 in the United States). 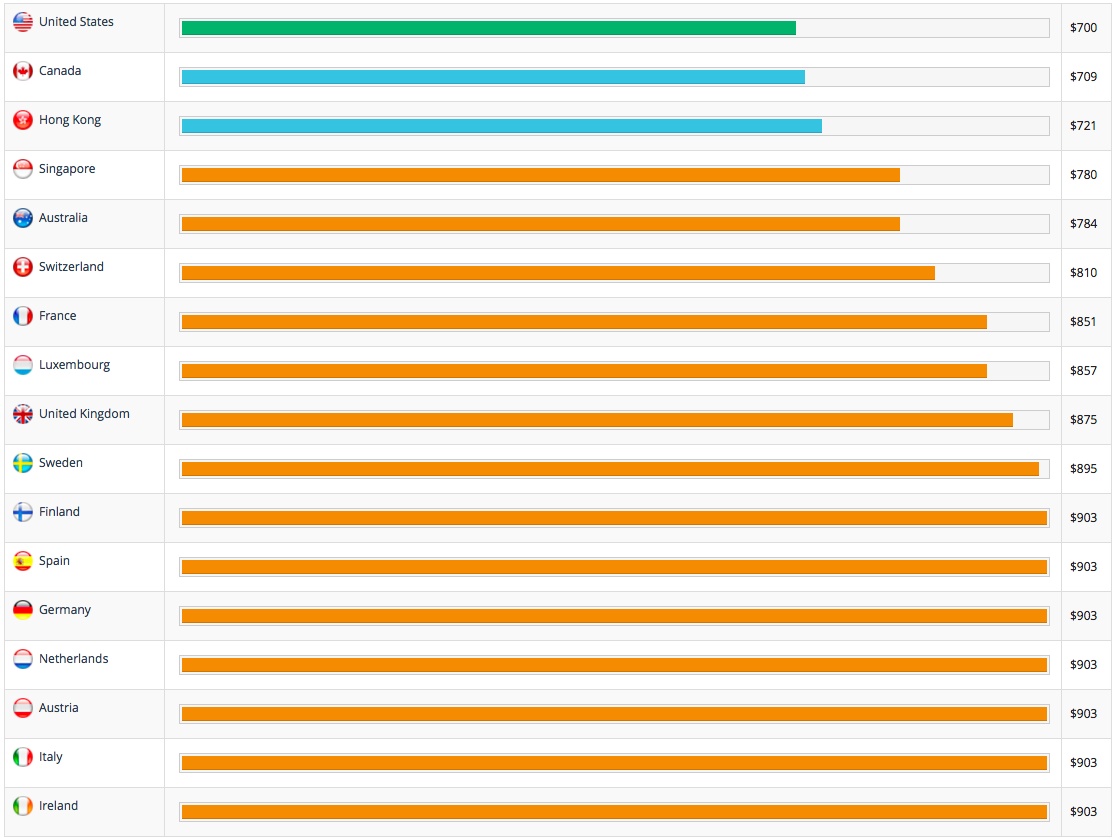 iPhone 6 and iPhone 6 Plus availability and pricing information in the United States is based on information from AT&T, Verizon, T-Mobile and Apple.

Due to high import taxes, shoppers in Finland, Spain, Germany, The Netherlands, Austria, Italy and Ireland at the moment seem to be paying the biggest premium for the baseline iPhone 6, about a whopping $903 in US dollars.

The website owners told me via email that the information collected thus far reinforces the notion that Apple has large quantities of the iPhone 6 available. By some estimates, the ratio of iPhone 6 vs. iPhone 6 Plus units is 75 to 25 percent, suggesting that Apple grossly underestimated demand for a large-screened iPhone.

The iPhone 6 Plus remains in high demand: 64 and 128GB models are rare and even the 16-gigabyte model is sold out. After announcing that pre-orders for both new iPhones topped four million units in the first 24 hours, Apple today said the phones sold ten million units during their opening weekend.

In terms of the color, the iPhone 6 with that unmistakable smoked Apple look is the most popular colorway so obviously Space Gray has become the new Gold. By comparison, the gold iPhone 5s edition was last year’s most coveted iPhone model.

“Most people turned to the 64GB model as we could expect,” iStockNow tell me.

That’s a rather clever strategy in my book.

Basically, Apple is suggesting you should pick one of the more capacious models because they now include twice the storage, for the same price. “The 16gb model has fallen from the most coveted model last year to least this term, the 128gb is far ahead,” noted iStockNow. 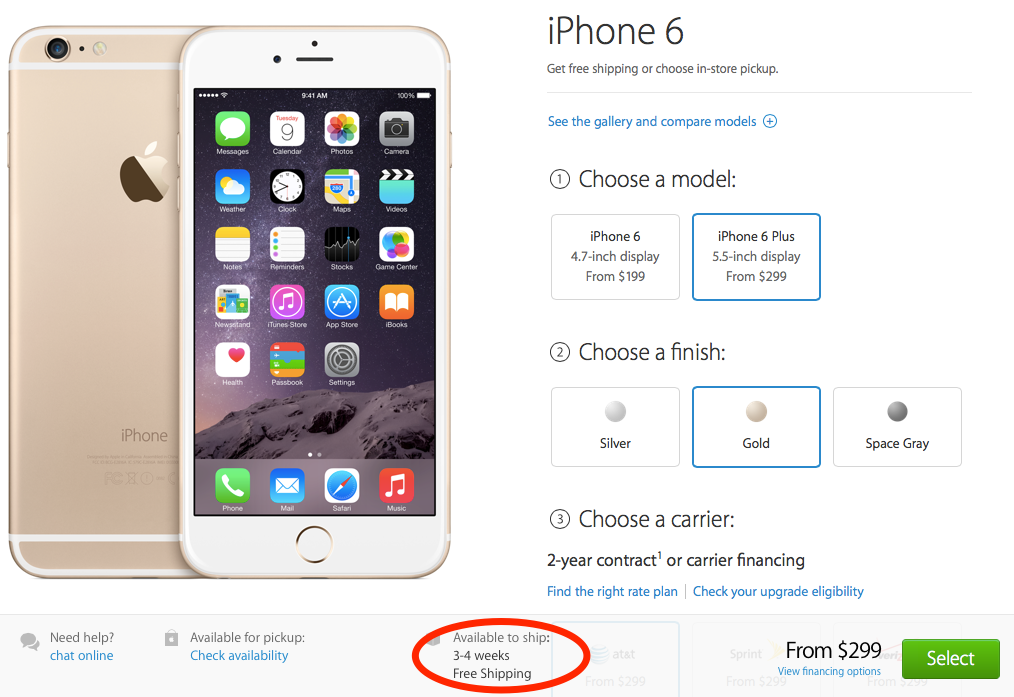 Wrapping up, if the 3-4 week delivery times estimated by Apple’s online store is too long a wait for that beautiful iPhone 6 Plus, you should at least consider choosing the iPhone 6 instead because the device seems to be quite easy to get.

I have decided to wait until the iPhone 6 Plus availability improves because I want that monstrous screen and a longer-lasting battery. As a guidance, if the iPhone 6 Plus shortage is to be compared with the iPhone 5S one, expect about two months of constrained supply.