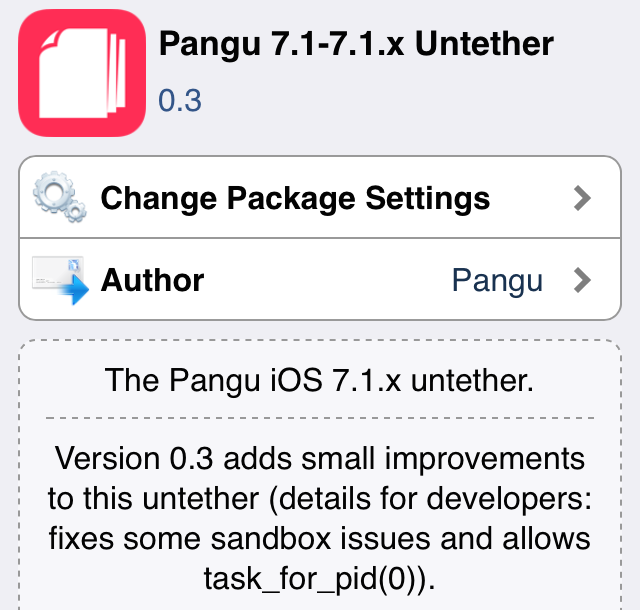 An update for the Pangu 7.1 – 7.1.x untether jailbreak is available now on Cydia. Version 0.3, available to those who jailbroke their iOS device using Pangu, comes under the form of a package update in the Cydia/Telesphoreo repo, one of Cydia’s default repos. According to the description, version 0.3 adds small improvements to the untether jailbreak. More specifically, it fixes sandboxing issues.

All users who see this update available in Cydia are prompted to update the package, regardless of what device or what iOS version they are currently running, but a few reports from users who have updated Pangu to version 0.3 can be cause for concerns.

Some have experienced issues after upgrading the package where their device would keep getting into Safe Mode. Apparently there are some tweaks that are causing the issue. A Reddit user says that removing the GestureMusicControls tweak fixed the problem. Another user reports Safari and Calculator are crashing on start. As for me, I have upgraded my iPhone 5s running 7.1.2 and have no issue to report.

This update seems to be a bit of hit or miss, although it’s hard to tell if problems should be attributed to Pangu itself or to some tweaks users have installed on their device. If you’re not completely sure what to do, then maybe it’s safer to sit on this update for the time being. If there are indeed issues caused by Pangu 7.1.x untether 0.3, we’ll surely see another update pop up in Cydia soon.

Please share your experience in the comment section below. Have you updated? If so, are you having any issue?

Update: iH8sn0w tells us more, confirming that it probably is a good idea to not update at this time.

Update 2: Cydia community manager Britta Gustafson confirmed with us that the package has now been pulled from the Cydia/Telesphoreo repository.