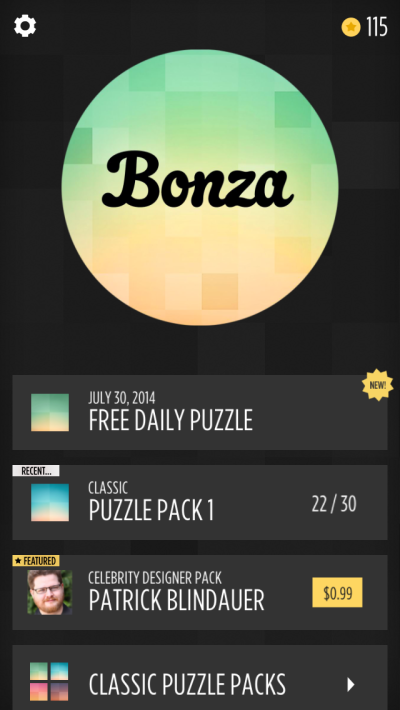 Looking at the App Store, it’s easy to see that word games and puzzles aren’t quite what the public is clamoring to download. Often, the endless runners and messaging apps take control of the charts, leaving good but more sophisticated games to fall out of common knowledge.

Bonza Word Puzzle, a new type of crossword, is trying to combat this trend with an innovative style and some additional quality features. How does it fare? Read on for a full review…

Bonza’s design is very clever in that it uses its gameplay to dictate its look. Because the main game “pieces” are squares, the backgrounds for the app sport the same shape, albeit in various sizes and colors. There is a certain seamlessness to Bonza, no doubt contributed to by the continuation of the squares.

Don’t hesitate to kick back with this game in a chair with the lights low–in fact, it may help even the insomniac in us all catch some sleep. It’s an eerily relaxing experience, with ambient colors and animations slipping into your unconscious and making for some serious eye-rubbing. While this may sound boring and negative, it actually aids the gameplay by putting the user in a calm, focused state. There are simply no distractions or poorly designed elements–even the icon is nice. 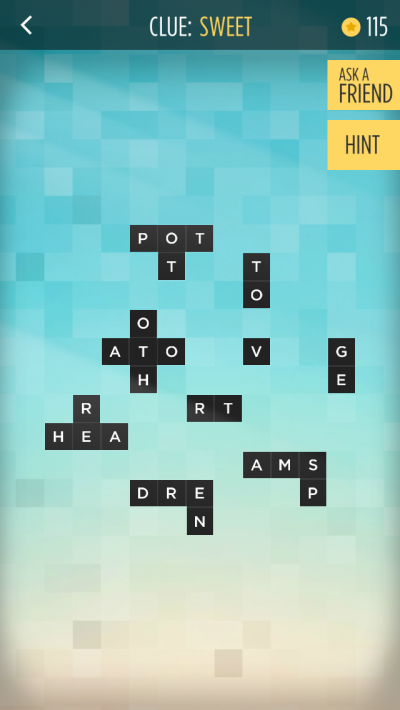 Bonza is undoubtedly a puzzler, but it’s difficult to put it into a subcategory. Even the developers, Minimega, can’t quite define their app. “It mixes word search, jigsaw and trivia knowledge to create something completely fresh,” says the app description, but all of those words can’t exactly pinpoint what Bonza brings to the table.

Essentially, the goal of the game is to use a hint provided to reverse-engineer a crossword. This can be done by assembling tiles in a fashion that make words, but these combinations also need to fit together to keep from overlapping other terms. If it all sounds confusing, it’s because it can be at first. The key is to locate strings of letters that can make a word; upon completing this, new connecting points (think horizontal and vertical intersections in crosswords) may reveal themselves.

The hints range from colors to animals to obscure topics, but none of them are quite as easy as the player may like. In addition, there are often mystery hints, further adding to the difficulty of the game. After finishing a section, however, reward is given in the form of coins. These coins can eventually unlock word hints or more puzzles.

Venturing into this game without some solid concentration and vocabulary skills is grounds for disaster, as it very much challenges the ability to consider and form words. While it is a casual game, it does require some brain power and knowledge of lingo–something anyone can enjoy in moderation.

Dragging sets of letters with a finger is about the only required action in the game, and performing it is met with satisfying “clicks” and “pops”. In a sense, the sound effects along with the ambient and lovely background music tie the game together. The taps by the user are always used to make sound, which adds a hidden music aspect to the whole experience. 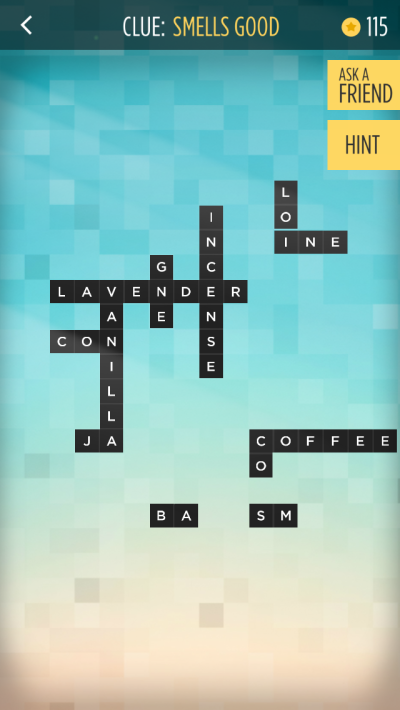 Bonza is a relaxing brain teaser with a low barrier to entry. Although it does take some practice to get used to the app, once the player knows the mechanics, the best is yet to come. The app is well-designed, consists of great puzzles, and has a beautiful soundtrack, all of which make it truly shine.

Bonza also is great for expanding vocabulary and learning new phrases and words. It isn’t difficult to see this becoming somewhat of an “edutainment” game if adopted into mainstream use.

As is the trend with most apps today, Bonza puts its stock in in-app purchases. After the first few puzzle packs, players are required to purchase later levels, which can be frustrating, especially for the addicted. The packs are about as cheap as they come ($.99), but for all of the app’s content, it can add up quickly. On the bright side, Bonza does offer discounted prices for buying in bulk. With this being said, it still can be quite disappointing to play the game while knowing eventually, it will be a pay-to-play scenario.

Despite the in-app purchases I previously mentioned, this app does offer quite a few puzzles for free. There are more than sixty, actually, and all of these tests can take some time and energy to complete. This is not one of those games that only require a single sitting, but if you are going to want to play it for weeks and months, expect to pay a little in order to extend the game. Whether you play the free version or decide to purchase the full app, the value and playability is quite good for the low prices.

Bonza has many endearing features, and only one of those is the actual gameplay. What we get from the app is a fantastic combination of wordplay, difficulty, music, and design brilliance. The only real drawback is the pricing, but after getting into the app and its capabilities, shelling out a few bucks won’t seem too unreasonable after all. Download Bonza in the App Store for iPhone and iPad.

Apps like Words with Friends and SCRABBLE Free have similar word-formation functionalities, while The New York Times Crossword relates to the crossword nature of Bonza. In a way, Bonza could be described as a combination of all three of these apps.